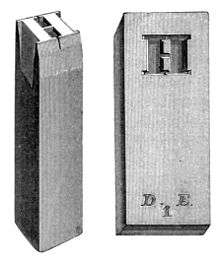 A punch (left) and the respective matrix produced from it (right). The small letters at the base of the matrix are founders marks.

In traditional typography, punchcutting is the craft of cutting letter punches in steel from which matrices were made in copper for type founding in the letterpress era. Cutting punches and casting type was the first step of traditional typesetting. The cutting of letter punches was a highly skilled craft requiring much patience and practice. Often the designer of the type would not be personally involved in the cutting.

The initial design for type would be two-dimensional, but a punch has depth, and the three-dimensional shape of the punch, as well as factors such as the angle and depth to which it was driven into the matrix, would affect the appearance of the type on the page. The angle of the side of the punch was particularly significant.

The punchcutter begins by transferring the outline of a letter design to one end of a steel bar. The outer shape of the punch could be cut directly, but the internal curves of a small punch were particularly difficult as it was necessary to cut deep enough and straight into the metal. While this can be done with cutting tools; a counterpunch, a type of punch used in the cutting of other punches, was often used to create the negative space in or around a glyph. A counterpunch could be used to create this negative space, not just where the space was completely enclosed by the letter, but in any concavity (e.g. above and below the midbar in uppercase "H").

Of course, the counterpunch had to be harder than the punch itself. This was accomplished by annealing (softening) the punch blank, and hardening and tempering the counterpunch. Such a tool solved two issues, one technical and one aesthetic, that arose in punchcutting.

Often the same counterpunch could be used for several letters in a typeface. For example, the negative space inside an uppercase "P" and "R" is usually very similar, and with the use of a counterpunch, they could be nearly identical. Counterpunches were regularly used in this way to give typefaces a more consistent look. The counterpunch would be struck into the face of the punch. The outer form of the letter is then shaped using files.

To test the punch, the punchcutter makes an imprint on a piece of paper after coating the punch with soot from an open flame. The soot left by the flame acts like ink to create an image on the paper (a smoke proof).

Once the punches are ready a mold could then be created from the punch by using the punch on a softer metal (such as copper) to create a matrix. Then, type metal, an alloy of lead, antimony, and tin, flows into the matrix to produce a single piece of type, ready for typesetting.

One characteristic of type metal that makes it valuable for this use is that it expands as it cools, keeping the accurate dimensions of letters. This characteristic is shared by the bronze used to cast sculptures, but copper-based alloys generally have melting points that are too high to be convenient for typesetting. (Water, silicon and bismuth are other substances that expand on freezing.)

This article is issued from Wikipedia - version of the 11/24/2014. The text is available under the Creative Commons Attribution/Share Alike but additional terms may apply for the media files.