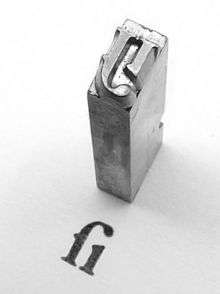 A sort made from type metal

In printing, type metal (sometimes called hot metal) refers to the metal alloys used in traditional typefounding and hot metal typesetting. Lead is the main constituent of these alloys. Antimony and tin are added to make the character produced durable and tough while reducing the difference between the coefficients of expansion of the matrix and the alloy. 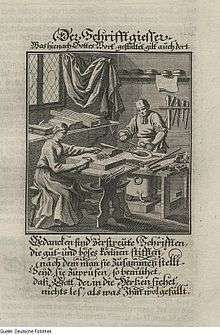 Although the knowledge of casting soft metals in moulds was well established before Johannes Gutenberg's time, his discovery of an alloy that was hard, durable, and would take a clear impression from the mould (because it did not shrink as much as lead alone when cooled) represents a fundamental aspect of his solution to the problem of printing with movable type. (His other contributions were creation of inks that would adhere to metal type and a method of softening handmade printing paper so that it would take the impression well.)

The enormous effort to create an alloy with the characteristics needed in an ideal type metal is often underestimated.

Cheap, plentifully available as galena and easily workable, lead has many of the ideal characteristics, but on its own it lacks the necessary hardness and does not make castings with sharp details because molten lead shrinks and sags when it cools to a solid.

After much experimentation it was found that adding pewterer's tin, obtained from cassiterite, improved the ability of the cast type to withstand the wear and tear of the printing process, making it tougher but not more brittle.

Despite patiently trying different proportions of both metals, solving the second part of the type metal problem proved very difficult without the addition of yet a third metal, antimony.

Alchemists had shown that when stibnite, an antimony sulfide ore, was heated with scrap iron, metallic antimony was produced. The typefounder would typically introduce powdered stibnite and horseshoe nails into his crucible to melt lead, tin and antimony into type metal. Both the iron and the sulfides would be rejected in the process.

The addition of antimony conferred the much needed improvements in the properties of hardness, wear resistance and especially, the sharpness of reproduction of the type design, given that it has the curious property of diminishing the shrinkage of the alloy upon solidification.

The proportions used are in the range: lead 50‒86%, antimony 11‒30% and tin 3‒20%. The basic characteristics of these metals are as follows:

The basis for type metal is lead, a relatively cheap metal, that melts at 327 °C.or 621.5°F It is easy to handle and makes alloys with many other metals. It is, however, very soft and castings with pure lead are not sharp enough for printing. Lead is poisonous and very heavy.

Lead is exceptionally soft, malleable and ductile but with little tenacity. Easily fusible with other metals, it does not produce sharply defined shapes.

Tin (Sn) It promotes the fluidity of the molten alloy and makes the type tough, giving the alloy resistance to wear. It is harder, stiffer and tougher than lead.

Antimony (Sb) melts at 630 °C. This highly crystalline metalloid, gives type metal its hardness and a much better and sharper cast from the matrix. It has a crystalline appearance while being both brittle and fusible. When alloyed with lead, it strengthens the alloy and improves casting detail.[1]

The actual compositions differed over time, different machines were adjusted to different alloys depending on the intended uses of the type. Printers had sometimes their own preferences about the quality of particular alloys. The Lanston Monotype Corporation in the United Kingdom had a whole range of alloys listed in their manuals.

The manuals for the Monotype composition caster (1952 and later editions) mention at least five different alloys to be used for casting, depending the purpose of the type and the work to be done with it.

Although in general Monotype cast type characters can be visually identified as having a square nick (as opposed to the round nicks used on foundry type), there is no easy way to identify the alloy aside from an expensive chemical assay in a laboratory.

Apart from this the two Monotype companies in the United States and the UK also made moulds with 'round' nicks. Typefounders and printers could and did order specially designed moulds to their own specifications: height, size, kind of nick, even the number of nicks could be changed.

Type produced with these special moulds can only be identified if the foundry or printer is known.

In Switzerland the company "Metallum Pratteln AG", in Basel had yet another list of type-metal alloys. If needed, any alloy according to customer specifications could be produced.

Regeneration-metal was melted into the crucible to replace lost tin and antimony through the dross.

Dross must be processed at specialized companies, in order to extract the pure metals in conditions that would prevent environmental pollution and remain economically feasible.

Pure metal melts and solidifies in a simple manner at a specific temperature. This is not the case with alloys. There we find a range of temperatures with all kinds of different events. The melting temperature of all mixtures is considerably lower than the pure components.

The addition of a small amount of antimony (5% to 6%) to lead will significantly alter the alloy's behavior compared to pure lead: although the melting point of pure antimony is 630 °C, this mixture will be completely molten and a homogeneous fluid even at temperatures as low as 371 °C. Letting this mixture cool the alloy will remain liquid even through 355 °C, the melting point of pure lead. Once the temperature reaches 291 °C, lead crystals will start to form, increasing the cohesion of the liquid alloy. At 252 °C, the mixture will start to fully solidify, during which the temperature will remain constant. Only when the mixture has fully solidified will the temperature start to decrease again.

Increasing the antimony content beyond 12% will lead to predominantly antimony crystallization.

Adding tin to this bipolar-system complicates the behaviour even further. Some tin enters into the eutectic. A mixture of 4% tin, 12% antimony, and 84% lead solidifies at 240 °C.

Depending from the metals in excess, compared with the eutectic, crystals are formed, depleting the liquid, until the eutectic 4/12 mixture is formed once more.

The 12/20 alloy contains many mixed crystals of tin and antimony, these crystals constitute the hardness of the alloy and the resistance against wear.

Raising the content of antimony cannot be done without adding some tin too. Because the fluidity of the mixture will dramatically diminish when the temperature goes down somewhere in the channels of the machine. Nozzles can be blocked by antimony crystals.

Eutectic alloys are used on Linotype-machines and Ludlow-casters to prevent blockage of the mould and to ensure continuous trouble-free casting.

Alloys used on Monotype machines tend to contain higher contents of tin, to obtain tougher character. All characters should be able to resist the pressure during printing. This meant an extra investment, but Monotype was an expensive system all the way.

The fierce competition between the different mechanical typecasting systems like Linotype and Monotype has given rise to some lasting fairy tales about typemetal. Linotype users looked down on Monotype and vice versa.

Monotype machines however can utilize a wide range of different alloys; maintaining a constant and a high production meant a strict standardization of the typemetal in the company, so as to reduce by all means any interruption of the production. Repeated assays were done at regular intervals to monitor the alloy used, since every time the metal is recycled, roughly half a per cent of tin content is lost through oxidation. These oxides are removed with the dross while cleaning the surface of the molten metal.

Nowadays this "battle" has lost its importance, at least for Monotype. The quality of the produced type is far more important. Alloys with a high-content of antimony, and subsequently a high content of tin, can be cast at a higher temperature, and at a lower speed and with more cooling at a Monotype composition or supercaster.

Although care was taken to avoid mixing different types of type metal in shops with different type casting systems, in actual practice this often occurred. Since a Monotype composition caster can cope with a variety of different metal alloys, occasional mixing of Linotype alloy with discarded typefounders alloy has proven its usefulness.

Mechanical linecasting equipment use alloys that are close to eutectic.

Copper has been used for hardening type metal; this metal easily forms mixed crystals with tin when the alloy cools down. These crystals will grow just below the exit opening of the nozzle in Monotype machines, resulting in a total blockage after some time. These nozzles are very difficult to clean, because the hard crystals will resist drilling.

Brass spaces contain zinc, which is extremely counterproductive in type metal. Even a tiny amount — less than 1% — will form a dusty surface on the molten metal surface that is difficult to remove. Characters cast from contaminated type metal such as this are of inferior quality, the solution being to discard and replace with fresh alloy.

Brass and zinc should therefore be removed before remelting. The same applies to aluminium, although this metal will float on top of the melt, and will be easily discovered and removed, before it is dissolved into the lead.

Magnesium plates are very dangerous in molten lead, because this metal can easily burn and will ignite in this way the metal in the pot.

Iron is hardly dissolved into type metal, although the molten metal is always in contact with the cast iron surface of the melting pot.

Joseph Moxons', in his Mechanick Exercises, mentions a mix of equal amounts of "antimony" and iron nails.[3]

The "antimony" here was in fact stibnite, antimony-sulfide (Sb2S3). The iron was burned away in this process, reducing the antimony and at the same time removing the unwanted sulfur. In this way ferro-sulfide was formed, that would evaporate with all the fumes.

The mixture of stibnite and nails was heated red hot in an open-air furnace, until all is molten and finished. The resulting metal can contain up to 9% of iron. Further purification can be done by mixing the hot melt with kitchen-salt, NaCl. After this red hot lead from another melting pot is added and stirred thoroughly.[4]

Some tin was added to the alloy for casting small characters and narrow spaces, to better fill narrow areas of the mould. The good properties of tin were well known. The use of tin was sometime minimized to save expenses.

Much of this toxic work was done by child labour, a labor force that includes children.[5]

As a supposed antidote to the inhaled toxic metal fumes, the workers were given a mixture of red wine and salad oil:[6]