He was a professor of cybernetics at the Frunze Military Academy[2] and chairman of its cybernetic section[3] for 16 years.[4] He helped found the Moscow Helsinki Group and the Ukrainian Helsinki Group.[5][6] According to Joseph Alsop, Grigorenko publicly denounced the "totalitarianism that hides behind the mask of so-called Soviet democracy."[7]

In 1939, he graduated with honors from the Kuybyshev Military Engineering Academy and the Military Academy of the General Staff of the Armed Forces of Russia.[9] He took part in the battles of Khalkhin Gol, against the Japanese on the Manchurian border in 1939, and in the Second World War.[10] He commanded troops in initial battles following 22 June 1941.[11] During the war, he also commanded an infantry division in the Baltic for three years.[12]

He went on a military career and reached high ranks during World War II. After the war, being a decorated veteran, he left active career and taught at the Frunze Military Academy, reaching the rank of a Major General.

In 1949, Grigorenko defended his Ph.D. thesis on the theme “Features of the organization and conduct of combined offensive battle in the mountains.”[13]

In 1960, he completed work on his doctoral thesis.[14] Over 70 of his scientific works on military science were published.[15]

In 1961, Petro Grigorenko started to openly criticize what he considered the excesses of the Khrushchev regime.[17]:151 He maintained that the special privileges of the political elite did not comply with the principles laid down by Lenin.[17]:151 Grigorenko formed a dissident group — The Group for the Struggle to Revive Leninism.[17]:151 Soviet psychiatrists sitting as legally constituted commissions to inquire into his sanity diagnosed him at least three times — in April 1964, August 1969, and November 1969.[18]:11 When arrested, Grigorenko was sent to Moscow's Lubyanka prison, and from there for psychiatric examination to the Serbsky Institute[17] where the first commission, which included Snezhnevsky and Lunts, diagnosed him as suffering from the mental disease in the form of a paranoid delusional development of his personality, accompanied by early signs of cerebral arteriosclerosis.[18]:11 Lunts, reporting later on this diagnosis, mentioned that the symptoms of paranoid development were "an overestimation of his own personality reaching messianic proportions" and "reformist ideas."[18]:11 Grigorenko was not responsible for his actions and was thereby forcibly committed to a special psychiatric hospital.[17]:151 While there, the government deprived him of his pension despite the fact that, by law, a mentally sick military officer was entitled to a pension.[17]:152 After six months, Grigorenko was found to be in remission and was released for outpatient follow-up.[17]:152 He required that his pension be restored.[17]:152 Although he began to draw pension again, it was severely reduced.[17]:152

He became much more active in his dissidence, stirred other people to protest some of the State's actions and received several warnings from the KGB.[17]:152 In 1968, after Grigorenko protested the Soviet invasion of Czechoslovakia, he was expelled from the Communist Party of the Soviet Union, arrested and ultimately committed to a mental hospital[19] until 26 June 1974 after 5 years of detention.[20] As Grigorenko had followers in Moscow, he was lured to the far-away Tashkent.[17]:151 While there, he was again arrested and examined by a psychiatric team.[18]:12 None of the manifestations or symptoms cited by the Lunts commission were found there by the second examination conducted under the chairmanship of Fyodor Detengof.[18]:12 The diagnosis and evaluation made by the commission was that "Grigorenko's [criminal] activity had a purposeful character, it was related to concrete events and facts... It did not reveal any signs of illness or delusions."[18]:11 The psychiatrists reported that he was not mentally sick, but responsible for his actions.[17]:152 He had firm convictions which were shared by many of his colleagues and were not delusional.[17]:152 Having evaluated the records of his preceding hospitalization, they concluded that he had not been sick at that time either.[17]:152 The KGB brought Grigorenko back to Moscow and, three months later, arranged a second examination at the Serbsky Institute.[17]:152 Once again, these psychiatrists found that he had "a paranoid development of the personality" manifested by reformist ideas.[17]:152 The commission, which included Lunts and was chaired by Morozov, recommended that he be recommitted to a special psychiatric hospital for the socially dangerous.[18]:12 Eventually, after almost four years, he was transferred to a regular mental hospital.[17]:152 On 17 January 1971 Grigorenko was asked whether he had changed his convictions and replied that "Convictions are not like gloves, one cannot easily change them".[21]

In 1971, Dr. Semyon Gluzman wrote an in-absentia psychiatric report on Grigorenko.[9][22][23] Gluzman came to the conclusion that Grigorenko was mentally sane and had been taken to mental hospitals for political reasons.[22] In the late 1970s and early 1980s, Gluzman was forced to serve seven years in labor camp for defending Grigorenko against the charge of insanity.[23][24] Amnesty International declared Grigorenko a prisoner of conscience.[25]

Grigorenko became the key defender of Crimean Tatars deported to Soviet Central Asia.[26] He advised the Tatar activists not to confine their protests to the USSR, but to appeal also to international organizations including the United Nations.[27]

Grigorenko was one of the first who questioned the official Soviet version of World War II history. He pointed out that just prior to the German attack on June 22, 1941, vast Soviet troops were concentrated in the area west of Białystok, deep in occupied Poland, getting ready for a surprise offensive, which made them vulnerable to be encircled in case of surprise German attack. His ideas were later advanced by Viktor Suvorov.

After publishing Abdurakhman Avtorkhanov’s book Stalin and the Soviet Communist Party: A Study in the Technology of Power, Grigorenko made and distributed its copies by photographing and typewriting.[28]:596 In 1976, Grigorenko helped found the Moscow Helsinki Group and the Ukrainian Helsinki Group.[4]

On 20 December 1977, Grigorenko was allowed to go abroad for medical treatment.[29] His health was ruined during forcible confinement in KGB-run mental hospitals.[30] On 30 November 1977, Grigorenko arrived in the United States[31] and was stripped of his Soviet citizenship.[32] In Grigorenko's words, Leonid Brezhnev signed the decree of depriving Grigorenko of Soviet citizenship on the ground that he was undermining the prestige of the Soviet Union.[33] In the same year, he became a U.S. citizen.[34] 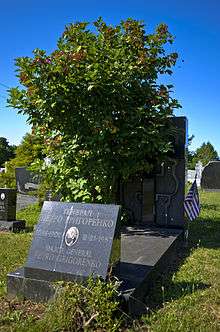 Being in USA since 1977, Grigorenko took an active part in the activities of the Ukrainian Helsinki Group foreign affiliate.[35] On 23 July 1978, Grigorenko made a statement condemning the trials of Soviet dissidents Anatoly Shcharansky, Aleksandr Ginzburg and Viktoras Petkus.[36]

In 1979 in New York, Grigorenko was examined by the team of psychologists and psychiatrists including Alan A. Stone, the then President of American Psychiatric Association.[37] The team came to the conclusion that they could find no evidence of mental disease in Grigorenko and his history consistent with mental disease in the past.[37] The conclusion was drawn up and publicized by Walter Reich.[38][39][40][41][42] Stone said Grigorenko's case confirms some of the accusations that psychiatry in the Soviet Union is sometimes employed as a tool of political repression.[43]

In 1981, Petro Grigorenko told about his psychiatric examinations, hospitalizations, life, and views in his memoirs V Podpolye Mozhno Vstretit Tolko Krys… (In Underground One Can Meet Only Rats…).[28] In 1982, the book was translated into English by Thomas P. Whitney under the title Memoirs[44] and reviewed by Alexander J. Motyl,[45] Raymond L. Garthoff,[46] John C. Campbell,[47] Adam Ulam,[48] Raisa Orlova and Lev Kopelev.[49]

In 1983, he said he considered the American political-economic system to be "the best that mankind has found to date."[50] In 1983, a stroke he suffered left him partially paralyzed.[51] Grigorenko died on 21 February 1987 in New York City.[4]

In 1991, a commission, composed of psychiatrists from all over the Soviet Union and led by Modest Kabanov, then director of the Bekhterev Psychoneurological Institute in St Petersburg, spent six months reviewing the Grigorenko files, drew up 29 thick volumes of legal proceedings,[1] and reversed the official diagnosis on Grigorenko in October 1991.[22]:73 In 1992, the official post-mortem forensic psychiatric commission of experts met at Grigorenko’s homeland removed the stigma of mental patient from him and confirmed that the debilitating treatment he underwent in high security psychiatric hospitals for many years was groundless.[52]:23 The 1992 psychiatric examination of Grigorenko was described by the Nezavisimiy Psikhiatricheskiy Zhurnal in its numbers 1–4 of 1992.[53][54]

Petro Grigorenko was married to Zinaida Mikhailovna Grigorenko[55] and had five sons Anatoly, Georgi, Oleg, Viktor and Andrew.[12] Two of them died while being children.[29] Andrew, an electrical engineer,[56] was declared a hereditary madman in 1975 and was expelled from the USSR to the USA where he lives now.[57] Andrew was repeatedly told that since his father was mentally ill, then he was hereditarily mentally ill as well, and if he would not stop his appearances in defense of human rights and his father, he was told to go to psikhushka.[15]

The different Latin spellings of Grigorenko's name exist due to the lack of uniform transliteration rules for the Ukrainian names in the middle of 20th century, when he became internationally known. The correct modern transliteration would be Petro Hryhorenko. However, according to the American identification documents of the late general the official spelling of his name was established as Petro Grigorenko. The same spelling is engraved on his gravestone at the Ukrainian Orthodox Church of St. Andrew in South Bound Brook, New Jersey, USA. The same spelling is also retained by his surviving American descendants: son Andrew and granddaughters Tatiana and Olga. 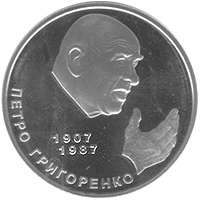