Jacque Fresco (born March 13, 1916), is an American futurist[1] and self-described social engineer.[2] Fresco is self-taught and has worked in a variety of positions related to industrial design.

Fresco writes and lectures his views on sustainable cities, energy efficiency, natural-resource management, cybernetic technology, automation, and the role of science in society. Fresco directs the Venus Project.[5] Fresco advocates global implementation of a socioeconomic system which he refers to as a "resource-based economy."[6][7]

Born March 13, 1916,[8] Jacque Fresco grew up in a Sephardi Jewish[9] home in Bensonhurst in the Brooklyn borough of New York City.[10] Fresco grew up during the Great Depression period.

Fresco spent time with friends discussing Charles Darwin, Albert Einstein, science, and the future.[11] Fresco attended the Young Communist League. After a discussion with the league president during a meeting Fresco was 'physically ejected' after loudly stating that 'Karl Marx was wrong!'[12] Fresco left home at the age of 14, hitchhiking and 'jumping' trains as one of the so-called "Wild Boys of the Road." This was during the Great Depression period.[13] Fresco later turned his attention to technocracy.[11]

Fresco worked at Douglas Aircraft Company in California during the late 1930s.[12][14] Fresco presented designs including a flying wing[15] and a disk-shaped aircraft. Some of his designs were considered impractical at the time and Fresco's design ideas were not adopted.[16] Fresco resigned from Douglas because of design disagreements.[12][16]

In 1942, Fresco was drafted into the United States Army.[11][17] He was assigned technical design duties for the Army Air Force at Wright Field design laboratories in Dayton, Ohio.[11][16][18][19] One design he produced was a "radical variable camber wing" with which he attempted to optimize flight control by allowing the pilot to adjust the thickness of the wings during lift and flight.[20][21] Fresco did not adjust to military life and was discharged.[11]

Model of the Trend Home

Fresco was commissioned by Earl Muntz, to design housing that was low cost. Muntz invested $500,000 seed money in the project. Fresco along with his associates Harry Giaretto and Eli Catran conceived, designed and engineered a project house called the Trend Home.[22] Fresco, 32 years old at the time, came closest to traditional career success with this project. Built mostly of aluminum and glass, it was on prominent display at Stage 8 of the Warner Bros. Sunset Lot in Hollywood for three months. The home could be toured for one dollar, with proceeds going to the Cancer Prevention Society. In the summer of 1948, a Federal Housing Administration official met Muntz about the project. The official's proposal, according to Muntz, would add a bureaucratic overhead negating the low production costs. Without Federal or further private funding the project did not make mass production. This experience led Fresco to the conclusion that society would have to be changed for his inventions to reach their potential.[10][23]

In the late 1940s, Fresco created and was director of Scientific Research Laboratories in Los Angeles.[19][24] Here he also gave lectures, and taught technical design,[12] meanwhile researching and working on inventions as a freelance inventor and scientific consultant.[25] During this period, Fresco struggled to get his research funded[26] and faced setbacks and financial difficulties. In 1955, Fresco left California after his lab was removed to build the Golden State Freeway.[12][14]

In 1955 Fresco moved to Miami, Florida. He opened a business as a psychological consultant but had no formal schooling in the subject.[14] Receiving a 'barrage of criticism' from the American Psychological Association Fresco stopped that business.[14] In a newspaper article from that time period Fresco claimed to have a degree from Sierra University, Los Angeles California, which is unverified.[27]

Fresco described white supremacist organizations he joined to test the feasibility of changing people. He tells of joining a local Ku Klux Klan and White Citizens Council in an attempt to change their views about racial discrimination.[28]

In Miami Fresco presented designs of a circular city.[29] Fresco made his living working as an industrial designer for various companies such as Alcoa and the Major Realty Corporation.[14]

In 1961, with Pietro Belluschi and C. Frederick Wise,[30] Fresco collaborated on a project, known as the Sandwich House.[14] Consisting of mostly prefabricated components, partitions, and aluminum, it sold for $2,950, or $7,500 with foundation and all internal installations.[30] During this period, Fresco supported his projects by designing prefabricated aluminum devices through Jacque Fresco Enterprises Inc.[31]

Looking Forward was published in 1969. Author Ken Keyes Jr., and Jacques Fresco coauthored the book. Looking Forward, is a speculative look at the future. The authors picture an ideal 'cybernetic society in which want has been banished and work and personal possessions no longer exist; individual gratification is the total concern'.[32]

Fresco formed "Sociocyberneering", a membership organization claiming 250 members according to an interview of Fresco.[33] Fresco hosted lectures in Miami Beach and Coral Gables[34][35] Fresco promoted his organization by lecturing at universities[36] and appearing on radio and television.[37][38] Although Fresco is presented as a 'Doctor' on the Larry King show there is no evidence of that being the case. Fresco did not complete high school.[39] Fresco's "sociocyberneering" as a membership group was discontinued and land was purchased at another location in rural Venus, Florida. Fresco established his home and research center there.[40]

The Venus Project and later career 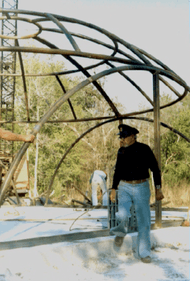 Fresco with Roxanne Meadows in Venus

Fresco, with Meadows, supported the project in the 1990s through freelance inventing,[41] industrial engineering, conventional architectural modeling, and invention consultations.[10]

In 2002, Fresco published his main work The Best That Money Can't Buy. In 2006, William Gazecki directed the semi-biographical film about Fresco, Future by Design.[42] In 2008, Peter Joseph featured Fresco in the film Zeitgeist Addendum where his ideas of the future were given as possible alternatives. Peter Joseph, founder of the Zeitgeist Movement began advocating Fresco's approach. In April 2012, the two groups disassociated due to disagreements regarding goals and objectives.[10]

In 2010, Fresco attempted to trademark the phrase "resource-based economy".[43] The phrase was reviewed and found to be too generic, and the trademark was denied.

Throughout 2010, Fresco traveled with Meadows, worldwide to promote interest in the Venus Project.[44][45] On January 15, 2011, Zeitgeist: Moving Forward was released in theaters, featuring Fresco.[46]

In November 2011, Fresco spoke to protesters at the "occupy Miami" site at Government Center in Miami.[47] In April 2012, Roxanne Meadows released a film, Paradise or Oblivion, summarizing the goals and proposals of the Venus Project.[48] In June 2012, Maja Borg screened her film, Future My Love, at the Edinburgh International Film Festival featuring the work of Fresco and Roxanne Meadows.[49][50]

Fresco holds lectures and tours at the Venus Project location.[51]

Fresco had two marriages when he lived in Los Angeles and carried his second marriage through his first couple years in Miami.[19] He divorced his second wife in 1957 and remained unmarried thereafter.[54] His second wife, Patricia, gave birth to a son, Richard, in 1953 and a daughter, Bambi, in 1956. Richard was an army private[55] and died in 1976.[56] Bambi died of cancer in 2010.[57]

Roxanne Meadows has assisted Fresco since 1976. As Fresco's domestic partner and administrative colleague, she oversees much of the management of the Venus Project.[10]

It’s a 'lack of professional engagement', William Gazecki who in 2006 completed Future by Design, a feature-length profile of Jacque Fresco says, that has hurt Fresco the most. “The real missing link in Jacque’s world is having put Jacque to work,” Gazecki says, “[It’s] exemplified when people say: ‘Well, show me some buildings he’s built. And I don’t mean the domes out in Venus. I mean, let’s see an office building, let’s see a manufacturing plant, let’s see a circular city.’ And that’s where he should have been 30 years ago. He should have been applying his work, in the real world … [but] he’s not a collaborator, and I think that’s why he’s never had great public achievements.”[58]

Fresco on Fresco: when asked by a reporter why he has such difficulty actualizing his many ideas, Fresco responded, "Because I can't get to anybody."[59]

Fresco's critical view of modern economics has been compared to Thorstein Veblen's concept of "the predatory phase in human development," according to an article in the journal of Society and Business Review.[60][61] Grønborg has labeled other facets of Fresco's ideology a "tabula rasa approach."[62]

Synergetics theorist, Arthur Coulter, calls Fresco's city designs 'organic' and 'evolutionary' (rather than revolutionary).[63] Coulter posits such cities as the answer to Walter B. Cannon's idea of achieving homeostasis for society.[63]

Fresco describes his form of governance in this way: "The aims of The Venus Project have no parallel in history, not with communism, socialism, fascism or any other political ideology. This is true because cybernation is of recent origin. With this system, the system of financial influence and control will no longer exist."[62]

Ludwig von Mises Institute scholar Robert P. Murphy has raised the calculation problem against a resource-based economy.[64] In a resource-based economy, Murphy claims there is no ability to calculate the availability and desirability of resources because the price mechanism is not utilized. Addressing this aspect, another article in the Quarterly Journal of Austrian Economics, states criticism of 'central plannings' computation problem applies to the ideas of Fresco.[65]

The Venus Project states on its website states that it is not utopian.[66] Nikolina Olsen-Rule, writing for the Copenhagen Institute for Futures Studies, supports this idea,

"For most people, the promise of the project sounds like an unattainable utopia, but if you examine it more closely, there are surprisingly many scientifically founded arguments that open up an entire new world of possibilities."[67]

Morten Grønborg, also of Copenhagen Institute for Futures Studies, points out the Venus Project is,

"... this visionary idea of a future society has many characteristics in common with the utopia. ... the word utopia carries a double meaning, since in Greek it can mean both the good place (eutopia) and the nonexisting place (outopia). A good place is precisely what Fresco has devoted his life to describing and fighting for."[68]

Hans-Ulrich Obrist notes, "Fresco's future may, of course, seem outmoded and his writings have been subject to critique for their fascistic undertones of order and similitude, but his contributions are etched in the popular psyche and his eco-friendly concepts continue to influence our present generation of progressive architects, city planners and designers."[69]

Commenting on Fresco, physicist, Paul G. Hewitt, wrote that Fresco inspired him toward a career in physical science.[34][71]