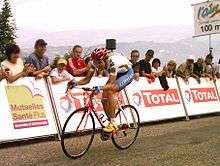 Taaramäe turned professional in 2008 for Cofidis after riding for the team as a stagiaire in late 2007 and winning a stage at the Circuit des Ardennes early in the season. In 2008 he won two stages of Grand Prix du Portugal and a stage of Tour de l'Avenir. At the 2008 Summer Olympic Games, Taaramäe competed in the road race and the road time trial.

In 2011, Rein finished 11th overall in the 2011 Tour de France. On Stage 14 of the 2011 Vuelta a España Taaramae and breakaway companion David de la Fuente were the last two riders of a 17-man breakaway, but with 2 km to go de la Fuente dropped back to pace teammate Juan José Cobo up the climb allowing Taaramae to solo to his first ever Grand Tour stage win. He ultimately withdrew from the race prior to its conclusion in Madrid.

In August 2014 Astana Pro Team general manager Alexander Vinokourov announced that Taaramäe had signed a one-year contract with the team for the 2015 season.[4]

2015 began well for Rein with the victory at Vuelta Ciclista a Murcia. Hopes were high with Grand Tours in mind, especially Le Tour. At 2015 Tour de France Taaramäe was meant to help Nibali in the mountains. Unfortunately Taaramäe was forced to abandon the race during stage 11 due to illness. After the disappointing Tour Taaramäe went on to win in style back-to-back 2015 Vuelta a Burgos and 2015 Arctic Race of Norway in August. Simultaneously rumors of Taaramäe leaving Astana started to emerge and at the end of August Taaramäe signed a one-year deal with Team Katusha.

He was named in the start list for the 2016 Giro d'Italia.[5] He won the 20th stage of the race, becoming the first Estonian to win a stage in the Giro.[6] After a short vacation at home in Estonia, Taaramäe went to win the overall at Tour de Slovenie, together with stage win at Stage 2. Taaramäe's next main starts will be at 2016 Tour de Pologne, 2016 Summer Olympics in Rio and 2016 Vuelta a España.