Aru was born in San Gavino Monreale, Sardinia, but he lived in Villacidro.[3] At the age of 18 he moved to mainland Italy to pursue a cycling career at under 23 ranks.[4] He joined the Palazzago team where he won the Giro della Valle d'Aosta twice (in 2011 and 2012). In 2012 he also finished runner up to American rider Joe Dombrowski in the Baby Giro.[5]

Aru joined the Astana Pro Team during the 2012 season, after four years with the Palazzago domestic team in Italy. In 2013 he finished fourth overall in the Giro del Trentino, also claiming the Young Riders' Jersey. He rode his first Grand Tour, the 2013 Giro d'Italia, in support of team leader Vincenzo Nibali. He helped Nibali win the race overall, finishing 42nd himself.

In 2014, Aru again rode the 2014 Giro d'Italia, with the expectation of supporting former winner Michele Scarponi. However, Aru proved stronger than his teammate and on Stage 15 took his first professional victory by winning on the summit finish of Montecampione. Aru went on to finish the Giro in third place overall behind Nairo Quintana (Team Movistar) and Rigoberto Urán (Omega Pharma-QuickStep), reaching the podium in just his second Grand Tour.[6] 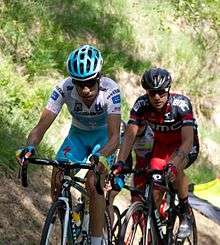 Aru (left) in the White Jersey at the Giro d'Italia.

In his next Grand Tour, the 2014 Vuelta a España, Aru won the Stage 11 summit finish atop Alto de San Miguel de Aralar, attacking the leading group with one kilometer to go.[7] He repeated the feat on Stage 18 finishing Monte Castrove. He escaped with Chris Froome near the end of the climb and outsprinted his rival.[8] He finally finished fifth of the Spanish Grand Tour, won by Alberto Contador.[9] He finished his season in the Italian Autumn classics, placing fourth in Milano–Torino and ninth in the Giro di Lombardia. 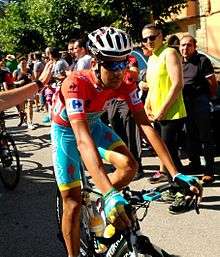 Aru with the Red Jersey at 2015 Vuelta a España.

In 2015, Aru came in sixth at the Volta a Catalunya. In April, he missed the Giro del Trentino because of an intestinal ailment.[10] Greg Henderson accused Aru of faking the ailment, and actually skipping due to a pending biological passport case.[11] Aru promised to sue Henderson for his accusations as he was preparing for the Giro d'Italia.[12] In May 2015, it was announced that Aru's contract with Astana was renewed until the end of 2017.[13] The 2015 Giro d'Italia started off bad for Aru's Astana team, losing seconds to Tinkoff-Saxo, the team in which main rival Alberto Contador rides for. However, in the first week of racing, Aru attacked Contador in the mountains as he was led by his Astana team, remaining only seconds behind Contador in the general classification battle.[14][15] And when Contador crashed on stage 13 in a pile-up, Fabio Aru crossed the line well in front of Contador, securing the first pink jersey of his career.[16][17] However the next day, a 59.3 kilometer individual time trial, hyped as the Giro's determining day, Aru lost 2 and a half minutes to Contador, thus losing the pink jersey.[18] He lost more time in the Mortirolo stage, but bounced back on Stage 19 to take an emotional solo victory.[19] On Stage 20 featuring the Colle delle Finestre, Aru won his second consecutive stage victory taking two minutes from Contador but failing to take the pink jersey.[20]

Aru later got back to racing at the Tour de Pologne and finished in 5th place as he preapared for his next season target, the Vuelta a España. He performed well in the first week, before taking the red leader's jersey after finishing second on stage 11, the Vuelta's queen stage.[21] He held the lead by a handful of seconds before losing it to Joaquim Rodríguez on stage 16.[22] On stage 17, a 38 kilometer individual time trial, he was able to perform very well and keep himself within 3 seconds of the winner of the ITT and new leader of the Vuelta, Tom Dumoulin. Over the final days, Aru attacked Dumoulin repeatedly, trying to place himself back in red. It wasn't until the penultimate mountain day that Aru succeeded, dropping Dumoulin and advancing himself towards his first Grand Tour win, as he cried tears of relief and happiness as he crossed the finish line.[23]