Luis León Sánchez Gil (born 24 November 1983 in Mula) is a Spanish road bicycle racer for UCI ProTeam Astana. Sánchez's major achievements include winning the overall classifications of the 2009 Paris–Nice and the 2005 Tour Down Under, as well as the one-day race Clásica de San Sebastián in 2010 and 2012. He also has 4 Tour de France stage victories to his palmares and is a four-time Spanish National Time Trial Champion. He is a time trial specialist and has improved his climbing skills over the course of his career.

He is also known as Lulu Sanchez. Leon is not his surname but he carries it as a middle name as a mark of respect to his grandfather originally, but since late 2006 also as a tribute to his eldest brother, Leon Sanchez, who died in a motorbike accident. His younger brother, Pedro León Sánchez Gil, is a professional footballer, playing for La Liga side Getafe CF. His other brother, Antonio Leon Sanchez, plays indoor football. He is not related to fellow Spanish cyclist Samuel Sanchez.

Sánchez rode for team Liberty Seguros from 2004 until 2006, with his major results being overall victories in the 2005 Tour Down Under, and podium positions in the 2006 edition of the same race, and the Vuelta a Castilla y León.

In 2007, he moved to the Caisse d'Epargne team following the collapse of the Liberty Seguros-Würth team in the wake of the Operación Puerto doping case. In his first season with the team, he won the Vuelta a Mallorca, and finished third in Paris–Nice after winning Stage 6.

The 2008 season saw Sánchez win another stage of Paris–Nice, this time finishing fifth overall. He claimed the Spanish National Time Trial Championship for the first time. He also rode his second Tour de France, and won Stage 7 after counterattacking, having been in a breakaway that was caught by the peloton.

Sánchez won the 2009 Tour Méditerranéen, and the following month won Paris–Nice after winning Stage 7 in a dominant fashion. He also won stages of the Vuelta al País Vasco and Tour du Haut Var, and took victory on Stage 8 of the Tour de France on his way to finishing 26th overall.

The 2010 season was Sánchez's most successful to date. He showed strong form in the early part of the season, finishing second in the Tour Down Under and winning the fifth stage. This was followed with another second place, in the Volta ao Algarve, after he won the final time trial. Sánchez attempted to defend his Paris–Nice title, but finished second overall, eleven seconds behind Alberto Contador. Sánchez then won the overall classification and a stage at the Circuit de la Sarthe in April. He recorded a fourth place in the Volta a Catalunya, and reclaimed his National Time Trial Championship title. At the 2010 Tour de France, Sánchez finished second on Stage nine after being in the breakaway, and went on to finish eleventh overall (later revised to tenth after Alberto Contador was stripped of the title), his best result to date in the Tour. Following the Tour, Sánchez took his biggest one-day race victory by winning the Clasica de San Sebastian. Sánchez also rode the Vuelta a Espana, and finished tenth overall after a strong final week. 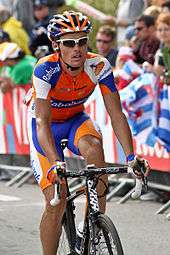 Sánchez joined Dutch team Rabobank for the 2011 season. Once again he won the national time trial championships in 2011. He also won Stage 9 of the Tour de France, but was unable to repeat his high overall placing of 2010, managing only 57th overall. Likewise, he rode the Vuelta a Espana and finished 53rd overall.

Remaining with Rabobank into 2012,[2] Sánchez won Stage 6 of Paris–Nice after a long breakaway with veteran Jens Voigt, his fourth stage victory in the event.[3] He also won two consecutive stages of the Tour de Romandie, but sprinted irregularly on the third stage where he took the win over Lotto–Belisol's Gianni Meersman, almost pushing him in the barriers on the right side, but the commissaires judged the sprint to be legal.[4] He led the race going into the final time trial, but put in a poor ride and dropped to tenth overall. Sánchez won the National Time Trial Championships yet again in 2012. He won the Tour de France's Stage 14, which included two category 1 climbs. He was in a breakaway with 4 other riders including the Slovak Peter Sagan (Liquigas–Cannondale) when he launched a solo attack 11.5 kilometres (7.1 mi) away from the finish line to take the solo victory with a margin of 47 seconds on the chasers.[5] Sánchez came close to a second victory on Stage 18 after he and Nicolas Roche attacked from the peloton in the final 10 km, overhauled the breakaway group and looked to have held off the chasing peloton only for Mark Cavendish to sprint past the pair in the final 200 metres. On the following stage, Sánchez set the third fastest time in the time trial, with only the final two riders to set a time, Chris Froome and Bradley Wiggins, beating Sánchez.

Sanchez at the 2012 Tour de France

Sánchez was selected to represent Spain in the Olympic road race and time trial. His time trial was wrecked by two mechanical problems, including losing his chain as he left the start ramp. He went on to win the Clásica de San Sebastián, with a strong solo attack over the closing kilometres, while his teammates Mollema and Gesink disrupted the chase. He resisted to the peloton's return during his 9 kilometres (5.6 mi) solo ordeal, never getting more than 20 seconds of an advantage over the group.[6]

In 2013,[7] Rabobank left cycling as a sponsor and the team became Blanco Pro Cycling.[8] At the beginning of February, the team decided to suspend Sanchez indefinitely, saying that they will investigate the past relationship between the rider and Eufemiano Fuentes, a doctor under trial for providing athletes with doping substances and performing blood transfusions.[9] After a few weeks, Sanchez was reinstated in the team, and returned to race in the 2013 Tour of Belgium, where he won a stage. For 2013, Sanchez planned to skip the Tour and focus on the Vuelta.[10]

In August 2014 Team Astana announced that they had signed Sánchez on a one-year deal for the 2015 season.[13]

In June 2015, he competed in the inaugural European Games, for Spain in cycling. He earned a gold medal in Men's road race and a bronze in Men's time trial.

2nd Overall Tour Down Under