The United States Revenue Act of 1913 also known as the Tariff Act, Underwood Tariff, Underwood Act, Underwood Tariff Act, or Underwood-Simmons Act (ch. 16, 38 Stat. 114, October 3, 1913), re-imposed the federal income tax following the ratification of the Sixteenth Amendment and lowered basic tariff rates from 40% to 25%, well below the Payne-Aldrich Tariff Act of 1909. It was signed into law by President Woodrow Wilson on October 3, 1913, and was sponsored by Alabama Representative Oscar Underwood. 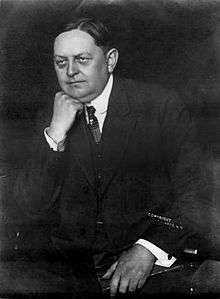 President Woodrow Wilson summoned a special session of Congress in April 1913. His immediate objective was to confront the perennial tariff question, and he brought special attention to the matter by deciding to appear in person before Congress to make his appeal. He was the first president since John Adams to do so.[1]

The joint session was a spectacular event. A huge crowd gathered and every seat in the House chamber was taken. Newspaper coverage was intense. Wilson spoke only briefly, but made it clear that tariff reform was needed, and that he would not be a party to a repeat of the embarrassment of the thwarted reform of 1894. The burden was clearly on Democratic shoulders because they controlled both houses of Congress for the first time in 18 years.

Oscar W. Underwood of Alabama guided a reform measure through the House, but his counterpart in the Senate, F.M. Simmons of North Carolina, reverted to form and allowed numerous increases in rates to be added. Wilson, unlike many of his predecessors, took the offensive. He went to the Capitol and twisted the arms of backsliding Democrats; he also warned the public of the invasion of Washington then underway by scores of lobbyists. The president was successful with generating a public reaction. Angry constituents wrote their congressmen and demanded tariff reform.

The 1913 Act established the lowest rates since the Walker Tariff of 1857. Most schedules were put on an ad valorem basis (that is, X% of the dollar value of the item). The duty on woolens went from 56% to 18.5%. Steel rails, raw wool, iron ore, and agricultural implements had zero rates. The reciprocity program the Republicans had been pushing was eliminated. Congress rejected proposals for a tariff board to scientifically fix rates, but did set up a study commission.

The Act also provided for the reinstitution of a federal income tax[2] as a means to compensate for anticipated lost revenue because of the reduction of tariff duties. The most recent effort to tax incomes (Wilson-Gorman Tariff of 1894) had been declared unconstitutional by the Supreme Court because the tax on dividends, interest, and rents had been deemed to be a direct tax not apportioned by population. That obstacle, however, was removed by ratification of the Sixteenth Amendment on February 3, 1913.[3] The Act provided in part that:

"...subject only to such exemptions and deductions as are hereinafter allowed, the net income of a taxable person shall include gains, profits, and income derived from salaries, wages, or compensation for personal service of whatever kind and in whatever form paid, or from professions, vocations, businesses, trade, commerce, or sales, or dealings in property, whether real or personal, growing out of the ownership or use of or interest in real or personal property, also from interest, rent, dividends, securities, or the transaction of any lawful business carried on for gain or profit, or gains or profits and income derived from any source whatever...."[4]

The incomes of couples exceeding $4,000, as well as those of single persons earning $3,000 or more, were subject to a one percent federal tax.[5] Further, the measure provided a progressive tax structure, meaning that high income earners were required to pay at higher rates.

It would require only a few years for the federal income tax to become the chief source of income for the government, far outdistancing tariff revenues.

Less than 1% of the population paid federal income tax at the time.

A "normal income tax" and an "additional tax" were levied against the net income of individuals as shown in the following table.

Adjusted for inflation by the average Consumer Price Index:

It is impossible to offer a meaningful judgment on the impact of the Underwood-Simmons Tariff because the entire international economic picture was soon upset by the outbreak of World War I. American products were in great demand throughout the world, making the question of protectionism moot. The next reordering of national tariff policy would not occur until after the war ended in the Fordney-McCumber Tariff of 1922. However, the top marginal rate of 7% was mentioned in Ronald Reagan's remarks on the South Lawn of the White House on October 22, 1986, when he said that the top rate was for multimillionaires.

The Revenue Act of 1913 also created a new group of tax-exempt organizations dedicated to social welfare in a provision that was a precursor to what is now Internal Revenue Code Section 501(c)(4).[8]