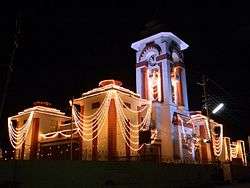 Sabarkantha is a district in Northeast of Gujarat state of India.

The administrative headquarters of the district is Himatnagar, about 80 km from Ahmedabad.

Sabarkantha District is bounded by Rajasthan state to the northeast, Banaskantha and Mehsana districts to the west, Gandhinagar to the south and Aravalli District to the South - East.

Himmatnagar is a district headquarters, and talukas Prantij and Talod are major industrial locations in Sabarkantha

Key raw materials such as groundnut, cotton, clay,oilseeds and tobacco are abundantly present in Sabarkantha.

It falls under Sesmic Zone 3

During the Western Satrap rule, the region was known as Shwabhra (Gujarati: શ્વભ્ર). The region is under rule of Satrap Rudradama in 150 A.D. as indicated in Ashoka's Major Rock Edicts at Junagadh. The river of the region is named as Shwabhravati which is now known as Sabarmati river. The region is also named in auxiliary text Gaṇapāṭha of Pāṇini's grammar work, Aṣṭādhyāyī.[1]

During the British Raj Vijaynagar in Sabarkantha district was the capital of Vijaynagar State or Pol State, one of the princely states of the Mahi Kantha Agency.[2]

In 2006 the Ministry of Panchayati Raj named Sabarkantha one of the country's 250 most backward districts (out of a total of 640).[3] It is one of the six districts in Gujarat currently receiving funds from the Backward Regions Grant Fund Programme (BRGF).[3]

Punsari, a small village in the district was selected as the best village in Gujarat.[7]

Idario Gadh - Ilva Durga (ancient fort) – Idar is an ancient fort, known as 'Ilva Durga' and finds mentioned in Mahabharat and in the travelogue of the Rathore Rajputs in the Mahi Kantha agency at the time of British Raj. It is a classic example of a naturally protected hill fort, located at the southern edge of the Aravalli range. At the foothill, lay the ruins of an old palace, a fine specimen of architecture in stone with delicately carved balconies. The entry to Idar town is through a three storeyed clock tower cum entrance gate, with a huge arch and semi circular dome at the top. The road, with a colourful bazaar on both sides, leads to the tower and ends at the foothills of Idar fort.[8]

Vijay Villas Vijaynagar - Vijay Villas Vijaynagar is nested on the foothills of the aravali ranges and is on the edge of among the few dense forests left in Gujarat in the Sabarkantha district which is on the border of Gujarat and Rajasthan. It is a heaven for nature and wild life admirers. Unique for its picturesque surroundings which serves as a refuge for fascinating species of flora and fauna, a sanctuary of rare birds and wild animals, adorned by beautiful flowing rivulets and unsullied lakes fills up your senses.[9]

Darbargadh - About 18 km from Ambaji in Sabarkantha district, Poshina takes one back to the simple beauty of traditional village life, populated by a captivating mélange of colorful tribal communities of the Garasias, Bhils and the pastoral Rabaris. Poshina is home to a tribal shrine where you find the staggering scene of thousands of terracotta horses standing in rows as offerings to the local goddess. Nearby villages have similar horses carved in reverence to her divinity. A visit to the homes of the potters who make these striking horses is an excellent glimpse into tribal culture.

In Poshina you find the Darbargadh Poshina, once a palace, and now a welcoming heritage hotel, with huge gateways, a massive dome, numerous pillars and arches, a pleasant courtyard, gardens, lawns and terraces, owned by the descendants of the Chalukyas, whose empire spread through much of Gujarat and Central India in the 12th century. You also find old Jain sandstone temples of Parshvanath and Neminath and an old Shiva temple.

Poshina is host to the famous Chitra-Vichitra fair, at the nearby Gunbhakhari village, a couple of weeks after Holi.[10]

An ancient city, a gateway to Rajasthan. A hiding place for rulers, concealed from enemies, citizens, angry wives, even from the sun, tucked between sacred hills on the east and west. And the mystery of abandonment, decay.

Ancient temples, some still performing their pujas deep within this dense jungle, itself the larger temple, the trees themselves the gods.

Adivasi settlements, their lives rooted in their connection to the forest, from whom you might learn to listen to the deep hum of the world that envelops these scattered whispers of human constructions.

The ancient Polo city was built around the river Harnav, an ancient water body spoken of in the Puranas. It is believed to have been established in the 10th century by the Parihar kings of Idar, and was then conquered in the 15th century by the Rathod Rajputs of Marwar. The name is derived from pol, the Marwari word for "gate," signifying its status as a gateway between Gujarat and Rajasthan. It was built between Kalaliyo in the east, the highest peak in the area, and Mamrehchi in the west, considered sacred by the local adivasis. Together they block sunlight for most of the day, which might provide an explanation for the otherwise mysterious abandonment of the ancient city. Polo city also includes a more than 500 years old Jain temple.

The 400 square km area of dry mixed deciduous forest is most lush between September and December after the monsoon rains when the rivers are full, but at any time of the year it provides a rich wildlife experience. There are more than 450 species of medicinal plants, around 275 of birds, 30 of mammals, and 32 of reptiles. There are bears, panthers, leopards, hyenas, water fowl, raptors, passerines, and flying squirrels (mostly heard, rarely seen), all living under a canopy of diverse plants and trees. During winter, all manner of migratory birds occupy the forest; during the rainy season there are wetland birds.

Until recently, this area was not well-known, and saw very few visitors. The numbers have increased dramatically in the last few years, thanks to a few individuals working to promote its beauty. This increased flow comes with a price, however. It is important to remember, as visitors, to approach each destination and its inhabitants, human or otherwise, humbly, openly, and with the awareness that every interaction, no matter how slight, carries its own impact on the area whether we know it or not.[11]