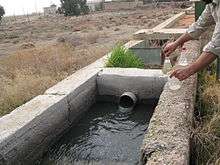 Raw sewage arriving at a sewage treatment plant in Syria

Sewage is a water-carried waste, in solution or suspension, that is intended to be removed from a community. Also known as domestic or municipal wastewater, it is characterized by volume or rate of flow, physical condition, chemical and toxic constituents, and its bacteriologic status (which organisms it contains and in what quantities). It consists mostly of greywater (from sinks, tubs, showers, dishwashers, and clothes washers), blackwater (the water used to flush toilets, combined with the human waste that it flushes away); soaps and detergents; and toilet paper (less so in regions where bidets are widely used instead of paper). Whether it also contains surface runoff depends on the design of sewer system.

All sewage ends up back in the environment (from which its constituents came), by any of several routes. A basic distinction in its route is whether it undergoes sewage treatment to mitigate its effect on the environment before arriving there. Sewage usually travels from a building's plumbing either into a sewer, which will carry it elsewhere, or into an onsite sewage facility (of which there are many kinds). Whether it is combined with surface runoff in the sewer depends on the sewer design (sanitary sewer or combined sewer). Before the 20th century, sewers usually discharged into a body of water such as a stream, river, lake, bay, or ocean. There was no treatment, so the breakdown of the human waste was left to the ecosystem. Today, the goal is that sewers route their contents to a wastewater treatment plant rather than directly to a body of water. In many countries, this is the norm; in many developing countries, it may be a yet-unrealized goal. In general, with passing decades and centuries, humanity seeks to be smarter about the route of sewage on its way back to the environment, in order to reduce environmental degradation and achieve sustainability. Thus other goals of modern sewage routing include handling surface runoff separately from sewage, handling greywater separately from toilet waste, and coping better with abnormal events (such as peaks in use from internal displacement and peaks in stormwater volumes from extreme weather).

Proper collection and safe, nuisance-free disposal of the liquid wastes of a community are legally recognized as a necessity in an urbanized, industrialized society.[1] The reality is, however, that most wastewater produced globally remains untreated causing widespread water pollution, especially in low-income countries: A global estimate by UNDP and UN-Habitat is that 90% of all wastewater generated is released into the environment untreated.[2] In many developing countries the bulk of domestic and industrial wastewater is discharged without any treatment or after primary treatment only.

The term sewage is nowadays regarded as an older term and is being more and more replaced by "wastewater".[3] In general American English usage, the terms "sewage" and "sewerage" mean the same thing.[4][5][6] Both words are descended from Old French assewer, derived from the Latin exaquare, "to drain out (water)". In American technical and professional English usage, "sewerage" refers to the infrastructure that conveys sewage.[7] 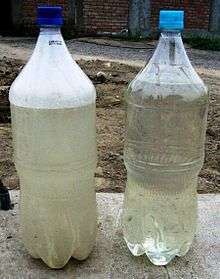 Sewage is a complex mixture of chemicals, with many distinctive chemical characteristics. These include high concentrations of ammonium, nitrate, phosphorus, high conductivity (due to high dissolved solids), high alkalinity, with pH typically ranging between 7 and 8. The organic matter of sewage is measured by determining its biological oxygen demand (BOD) or the chemical oxygen demand (COD). Sewage also contains the nutrients nitrogen and phosphorus

Sewage can be monitored for both disease-causing and benign organisms with a variety of techniques. Traditional techniques involve filtering, staining, and examining samples under a microscope. Much more sensitive and specific testing can be accomplished with DNA sequencing, such as when looking for rare organisms,[8] attempting eradication,[9] testing specifically for drug-resistant strains,[10] or discovering new species.[11] Sequencing DNA from an environmental sample is known as metagenomics.

Sewage has also been analyzed to determine relative rates of use of prescription[12] and illegal[13] drugs among municipal populations.

Trihalomethanes can also be present as a result of past disinfection.

All categories of sewage are likely to carry pathogenic organisms that can transmit disease to humans and animals. Sewage also contains organic matter that can cause odor and attract flies.

Sewage contains nutrients that may cause eutrophication of receiving water bodies; and can lead to ecotoxicity.

Increasingly, agriculture is using untreated wastewater for irrigation. Cities provide lucrative markets for fresh produce, so are attractive to farmers. However, because agriculture has to compete for increasingly scarce water resources with industry and municipal users, there is often no alternative for farmers but to use water polluted with urban waste, including sewage, directly to water their crops. There can be significant health hazards related to using water loaded with pathogens in this way, especially if people eat raw vegetables that have been irrigated with the polluted water.

The International Water Management Institute has worked in India, Pakistan, Vietnam, Ghana, Ethiopia, Mexico and other countries on various projects aimed at assessing and reducing risks of wastewater irrigation. They advocate a ‘multiple-barrier’ approach to wastewater use, where farmers are encouraged to adopt various risk-reducing behaviours. These include ceasing irrigation a few days before harvesting to allow pathogens to die off in the sunlight, applying water carefully so it does not contaminate leaves likely to be eaten raw, cleaning vegetables with disinfectant or allowing fecal sludge used in farming to dry before being used as a human manure.[14] The World Health Organization has developed guidelines for safe water use. 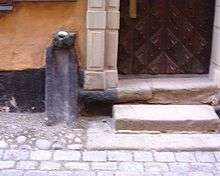 A medieval waste pipe in Stockholm Old Town formerly deposited sewage on the street to be flushed away by rain.
Main article: Sewage collection and disposal
Further information: Sewerage

A system of sewer pipes (sewers) collects sewage and takes it for treatment or disposal. The system of sewers is called sewerage or sewerage system (see London sewerage system) in British English and sewage system in American English. Where a main sewerage system has not been provided, sewage may be collected from homes by pipes into septic tanks or cesspits, where it may be treated or collected in vehicles and taken for treatment or disposal. Properly functioning septic tanks require emptying every 2–5 years depending on the load of the system.

Sewage and wastewater is also disposed of to rivers, streams, and the sea in many parts of the world. Doing so can lead to serious pollution of the receiving water. This is common in developing countries and may still occur in some developed countries, where septic tank systems are too expensive.

Sewage treatment is the process of removing the contaminants from sewage to produce liquid and solid (sludge) suitable for discharge to the environment or for reuse. It is a form of waste management. A septic tank or other on-site wastewater treatment system such as biofilters or constructed wetlands can be used to treat sewage close to where it is created.

In developed countries sewage collection and treatment is typically subject to local and national regulations and standards.