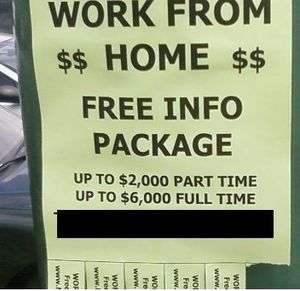 A work-at-home scheme is a get-rich-quick scam in which a victim is lured by an offer to be employed at home, very often doing some simple task in a minimal amount of time with a large amount of income that far exceeds the market rate for the type of work. The true purpose of such an offer is for the perpetrator to extort money from the victim, either by charging a fee to join the scheme, or requiring the victim to invest in products whose resale value is misrepresented.[1]

Work-at-home schemes have been around for decades, with the classic "envelope stuffing" scam originating in the United States during the Depression in the 1920s and 1930s.[2] In this scam, the worker is offered entry to a scheme where they can earn $2 for every envelope they fill. After paying a small $2 fee to join the scheme, the victim is sent a flyer template for the self-same work-from-home scheme, and instructed to post these advertisements around their local area – the victim is simply "stuffing envelopes" with flyer templates that perpetuate the scheme.[2] Originally found as printed adverts in newspapers and magazines, variants of this scam have expanded into more modern media, such as television and radio adverts, and forum posts on the Internet.

Legitimate work-at-home opportunities do exist, and many people do their jobs in the comfort of their own homes, but anyone seeking such an employment opportunity should be wary of accepting a home employment offer. A 2007 report in the United States suggested that about 97% of work-at-home offers were scams.[3] Many legitimate jobs at home require some form of post-high-school education, such as a college degree or certificate, or trade school, and some experience in the field in an office or other supervised setting. Additionally, many legitimate at-home jobs are not like those in schemes are portrayed to be, as they are often performed at least some of the time in the company's office, require more self discipline than a traditional job, and have a higher risk of firing.

Common types of work found in work-at-home schemes include:

Some adverts offer legitimate forms of work that really do exist, but exaggerate the salary and understate the effort that will have to be put into the job, or exaggerate the amount of work that will be available. Many such ads do not even specify the type of work that will be performed. There are many ways to make money online. Someone work as a freelancer by writing, designing logos, designing websites etc. [4] Some similar schemes do not advertise work that would be performed at home, but may instead offer occasional, sporadic work away from home for large payments, paired with a lot of free time. Some common offers fitting this description are acting as extras, mystery shopping (which in reality requires hard work, is paid close to minimum wage, and most importantly, does not require an up-front fee to join) and working as a nanny.[5] [6] [7]

Signs of a scam

Signs of a work-at-home scam versus a legitimate job may include:

The consequences of falling for a work-at-home scheme may be as follows:[9]