A green-collar worker is a worker who is employed in the environmental sectors of the economy.[1] Environmental green-collar workers (or green jobs) satisfy the demand for green development. Generally, they implement environmentally conscious design, policy, and technology to improve conservation and sustainability. Formal environmental regulations as well as informal social expectations are pushing many firms to seek professionals with expertise with environmental, energy efficiency, and clean renewable energy issues. They often seek to make their output more sustainable, and thus more favorable to public opinion, governmental regulation, and the Earth's ecology.

There is a growing movement to incorporate social responsibility within the green industries. A sustainable green economy simultaneously values the importance of natural resources and inclusive, equitable, and healthy opportunities for all communities.[9]

In the context of the current world economic crisis, many experts now argue that a massive push to develop renewable sources of energy could create millions of new jobs and help the economy recover while simultaneously improving the environment, increasing labour conditions in poor economies, and strengthening energy and food security.

Al Gore states that economists across the spectrum — including Martin Feldstein and Lawrence Summers — agree that large and rapid investments in a jobs-intensive infrastructure initiative is the best way to revive the economy in a quick and sustainable way.[17]

A report from the Center for American Progress concludes that a $100 billion federal investment in clean energy technologies over 2009 and 2010 would yield 2 million new U.S. jobs, cutting the unemployment rate by 1.3% and put the nation on a path toward a low-carbon economy. The report, prepared by the Political Economy Research Institute at the University of Massachusetts Amherst, proposes $50 billion in tax credits for energy efficiency retrofits and renewable energy systems; $46 billion in direct government spending for public building retrofits, mass transit, freight rail, smart electrical grid systems, and renewable energy systems; and $4 billion for federal loan guarantees to help finance building retrofits and renewable energy projects. The Center believes that clean energy investments would yield about 300,000 more jobs than if the same funds were distributed among U.S. taxpayers. The clean energy investments would also have the added benefits of lower home energy bills and reduced prices for non-renewable energy sources, due to the reduced consumption of those energy sources.[18]

Global efforts to tackle climate change could result in millions of "green" jobs over the coming decades, according to a 2008 study prepared by the Worldwatch Institute with funding from the United Nations Environment Programme (UNEP). The study found that the global market for environmental products and services is projected to double from $1.37 trillion per year at present to $2.74 trillion by 2020, with half of that market in efficient energy use. In terms of energy supply, the renewable energy industry will be particularly important. Some 2.3 million people have found renewable energy jobs in recent years, and projected investments of $630 billion by 2030 would translate into at least 20 million additional jobs.[19]

Also in 2008, the U.S. Conference of Mayors released a report that finds the U.S. economy currently generates more than 750,000 green jobs, while over the next 30 years, an emphasis on clean energy could result in a five-fold increase, to more than 4.2 million jobs. Engineering, legal, research, and consulting jobs currently dominate the green jobs in the United States and could grow by 1.4 million by 2038, while renewable electricity production will create 1.23 million jobs, alternative transportation fuels will add 1.5 million jobs, and building retrofits will create another 81,000 jobs. The report notes that most of today's jobs are in metropolitan areas, led by New York City; Washington, D.C.; Houston, Texas; and Los Angeles, California.[20] 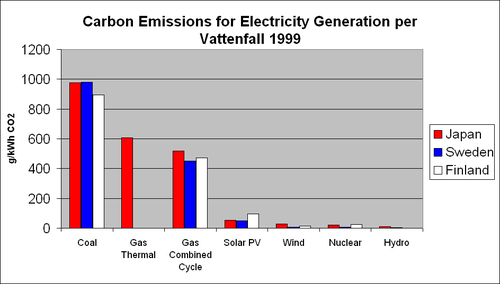 The Swedish utility Vattenfall did a study of full life cycle emissions of Nuclear, Hydro, Coal, Gas, Solar Cell, Peat and Wind which the utility uses to produce electricity. The net result of the study was that nuclear power produced 3.3 grams of carbon dioxide per KW-Hr of produced power. This compares to 400 for natural gas and 700 for coal (according to this study). The study also concluded that nuclear power produced the smallest amount of CO2 of any of their electricity sources.[21]

Claims exist that the problems of nuclear waste do not come anywhere close to approaching the problems of fossil fuel waste.[22][23] A 2004 article from the BBC states: "The World Health Organization (WHO) says 3 million people are killed worldwide by outdoor air pollution annually from vehicles and industrial emissions, and 1.6 million indoors through using solid fuel."[24] In the U.S. alone, fossil fuel waste kills 20,000 people each year.[25] A coal power plant releases 100 times as much radiation as a nuclear power plant of the same wattage.[26] It is estimated that during 1982, US coal burning released 155 times as much radioactivity into the atmosphere as the Three Mile Island incident.[27] In addition, fossil fuel waste causes global warming, which leads to increased deaths from hurricanes, flooding, and other weather events. The World Nuclear Association provides a comparison of deaths due to accidents among different forms of energy production. In their comparison, deaths per TW-yr of electricity produced from 1970 to 1992 are quoted as 885 for hydropower, 342 for coal, 85 for natural gas, and 8 for nuclear.[28]

"Green collar" is used in the Metal Gear franchise to refer to members of the arms industry, mercenaries, and other individuals in the private sector involved in war and military activity, notably for profit.[29]