Ninove (Dutch pronunciation: [ˈninoːvə]) is a city and municipality located in the Flemish province of East Flanders in Belgium. It is situated on the river Dender, and is part of the Denderstreek. The municipality comprises the city of Ninove proper and since the 1976 merger of the towns of Appelterre-Eichem, Aspelare, Denderwindeke, Lieferinge, Meerbeke, Nederhasselt, Neigem, Okegem, Outer, Pollare and Voorde. On January 1, 2012, Ninove had a total population of 37.289. The total area is 72.57 km² which gives a population density of 514 inhabitants per km².

Ancient coat of arms of Ninove with mural crown

During the Roman rule, Ninove was a small settlement located in the current "Nederwijk". With the arrival of the Franks in the 4th century AD, the settlement grew to a small agricultural town. The area on which Ninove is located was from 843 on part of the Holy Roman Empire. In the 11th century this area was conquered by the Count of Flanders, Boudewijn V and the whole area between the rivers Scheldt and Dender became part of the Flanders.

From the 11th century on, the medieval castrum was fortified into a castle stronghold. Because it lay on the trade route between Flanders and Brabant, the town prospered and grew into a city. In 1137, Norbertine monks founded the Saint Cornelius Abbey, adjacent to the city. Because of its large landholdings, the abbey soon became one of the biggest grain producers in Flanders. In 1295 the town and lands were bought by the count of Flanders Guy of Dampierre. His grandson Henry awarded the town a city charter in 1339.

The 15th to 17th century was a bad time for the city as the region was plagued with war and religious and political strife. The abbey was plundered by the French in 1578 during the reformation. In 1658, Ninove was occupied by the French army. After the Treaty of the Pyrenees, the French returned the area back to Spain but the area was to change hands many times during the wars of Louis XIV and Louis XV of France.

During the 17th century, Ninove was crippled under the indemnities laid on it by the warring parties and the town faced a big economic crisis as its cloth industry went into decline. The big abbey was closed by the French in 1796, after Flanders was annexed to France. The town served as a cavalry headquarters during the Waterloo Campaign of 1815.

During the 19th century, Ninove became industrialized and by the time of the First World War, the city became the centre of the Flemish match industry. This industry however declined in importance until the last match factory closed during the late 1970s.

From 1973 to 2011, the town of Meerbeke was the finish of the cycling race Tour of Flanders.

The population of Ninove has steadily grown and the city has become an attractive centre for commercial, recreational and economical activities in the area, and plays host to a popular annual Volkswagen show every March, specifically for air-cooled vehicles, i.e. Beetles, Camper-vans, Type 3's, 4's etc. The opening of a shopping mall in the centre of the city, as well as new sport and cultural infrastructure, and the construction of many residential apartment buildings have made Ninove a growing competitor for nearby Aalst and an ideal living-place for many commuters who work in nearby Brussels. 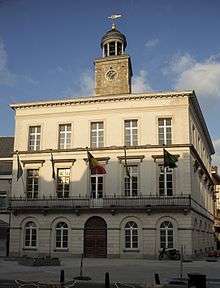 Since 1 November 2015, the mayor of Ninove has been Tania De Jonge (Open VLD). The city council currently has 33 members, and is composed as follows:

CD&V and N-VA had allied themselves for the 2000 election, and formed a coalition with the VLD. Due to the increase of population, the threshold of 35,000 inhabitants had been passed and Ninove saw an increase from 31 to 33 council members for the communal elections, which were held on Sunday October 8, 2006.

During the January 2, 2007 elections of the OCMW council, one member of the VLD fraction voted for a candidate of Vlaams Belang, making the VLD lose 1 seat. After an investigation led by the local chapter of the VLD, it was announced that the person they suspected to be the culprit was Schepen Mariette De Smet. De Smet announced she would leave the VLD, but would remain in the council of the mayor and aldermen as an independent. Her colleagues in the council stripped her of all her duties, but after a few months she regained a few of them. On January 9, 2008, De Smet, fellow VLD schepen Corijn, and another VLD member of the city council announced they were joining LDD, leaving the VLD-CD&V with a brittle one seat majority on the city council. The LDD alderman however elected to stay in the majority, making for a brittle coalition. On May 5, 2009 a Vlaams Belang councilmember defected to the LDD. In 2009 mayor Luc Durant announced he would resign due to health reasons. He was replaced in September by Michel Casteur. In 2010 another VB councilmember left the party to become an independent. In January 2011 Mariette De Smet announced she would join the Vlaams Belang lead chartel list "Forza Ninove" and left LDD. She was then again stripped of her duties by her fellow aldermen. On July 27, 2011 De Smet was murdered in a murder-suicide by a friend of her husband. She was replaced as alderman by a member of the VLD. In 2012 the local LDD disbanded with its members either joining Forza Ninove or N-VA.

The municipal elections on October 14, 2012 saw the ruling VLD-CD&V-LDD coalition head for electoral defeat as the VLD (9) lost three and the CD&V (4) lost four seats. Vlaams Belang, under the chartel name "Forza Ninove", won a seat, giving them a total of 9. The socialist party SP.a and the Green Party formed a chartel and won six seats. N-VA won 5 seats.

After the negotiations between VLD, SP.a-Groen and N-VA collapsed, the coalition between VLD and CD&V was renewed but expanded with SP.a-Groen. N-VA, claiming election irregularities by CD&V and "Forza Ninove", launched and won an administrative appeal. This ruling vacated the election results and ordered new elections to be held. Open VLD, CD&V and SP.a-Groen appealed this ruling to the Council of State which in February 2013 subsequently overthrew the previous ruling and restored the election results. The new city council and aldermen were finally inaugurated on 25 February 2013. On 1 November 2015 mayor Casteur stood down and was replaced by Tania De Jonge.

The next municipal elections are to be held sometime in October 2018. 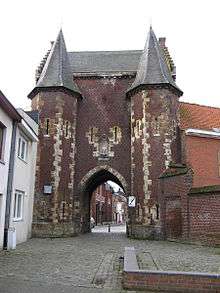 Throughout the ages the inhabitants of Ninove were given various nicknames as a title of honour or mockery.

The inhabitants were given the title of "wortelmannen" or "wortels" (Dutch for carrot people or carrot) because of an event during the Middle Ages. During a row with the neighbouring city of Aalst, the people of Aalst decided to besiege Ninove. The inhabitants of Ninove were completely surprised by this attack and were found unprepared. In all the confusion the key to close the city gate could not be found. In order to bolt the gate, a carrot was used. A passing donkey saw the carrot-bolt and ate it, leaving the city gate unbolted and the militiamen from Aalst free entry of the city.[2]

Ninove was described by Antonius Sanderus as the Oldest, the Boldest and the Wisest of Cities. Sanderus wrote in his Flandria Illustrata:

Ninove was called the oldest because of the similarity of its name with the ancient Assyrian city Nineveh, the boldest because it waited on the enemy with open gates and the wisest because the city had no jester or town fool, if one was needed a fool from a neighbouring town was lent. 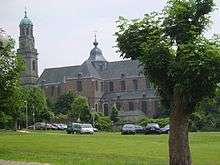 The Abbey church of Ninove