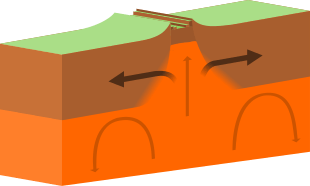 Current research indicates that complex convection within the Earth's mantle allows material to rise to the base of the lithosphere beneath each divergent plate boundary.[1] This supplies the area with vast amounts of heat and a reduction in pressure that melts rock from the asthenosphere (or upper mantle) beneath the rift area forming large flood basalt or lava flows. Each eruption occurs in only a part of the plate boundary at any one time, but when it does occur, it fills in the opening gap as the two opposing plates move away from each other.

Over millions of years, tectonic plates may move many hundreds of kilometers away from both sides of a divergent plate boundary. Because of this, rocks closest to a boundary are younger than rocks further away on the same plate. 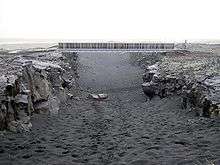 Bridge across the Álfagjá rift valley in southwest Iceland, that is part of the boundary between the Eurasian and North American continental tectonic plates.

At divergent boundaries, two plates move apart from each other and the space that this creates is filled with new crustal material sourced from molten magma that forms below. The origin of new divergent boundaries at triple junctions is sometimes thought to be associated with the phenomenon known as hotspots. Here, exceedingly large convective cells bring very large quantities of hot asthenospheric material near the surface and the kinetic energy is thought to be sufficient to break apart the lithosphere. The hot spot which may have initiated the Mid-Atlantic Ridge system currently underlies Iceland which is widening at a rate of a few centimeters per year.

Divergent boundaries are typified in the oceanic lithosphere by the rifts of the oceanic ridge system, including the Mid-Atlantic Ridge and the East Pacific Rise, and in the continental lithosphere by rift valleys such as the famous East African Great Rift Valley. Divergent boundaries can create massive fault zones in the oceanic ridge system. Spreading is generally not uniform, so where spreading rates of adjacent ridge blocks are different, massive transform faults occur. These are the fracture zones, many bearing names, that are a major source of submarine earthquakes. A sea floor map will show a rather strange pattern of blocky structures that are separated by linear features perpendicular to the ridge axis. If one views the sea floor between the fracture zones as conveyor belts carrying the ridge on each side of the rift away from the spreading center the action becomes clear. Crest depths of the old ridges, parallel to the current spreading center, will be older and deeper... (from thermal contraction and subsidence).

It is at mid-ocean ridges that one of the key pieces of evidence forcing acceptance of the seafloor spreading hypothesis was found. Airborne geomagnetic surveys showed a strange pattern of symmetrical magnetic reversals on opposite sides of ridge centers. The pattern was far too regular to be coincidental as the widths of the opposing bands were too closely matched. Scientists had been studying polar reversals and the link was made by Lawrence W. Morley, Frederick John Vine and Drummond Hoyle Matthews in the Morley–Vine–Matthews hypothesis. The magnetic banding directly corresponds with the Earth's polar reversals. This was confirmed by measuring the ages of the rocks within each band. The banding furnishes a map in time and space of both spreading rate and polar reversals.