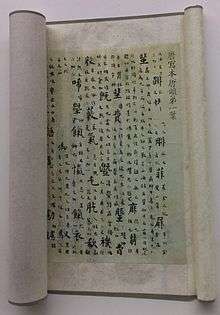 The Buddhist Uyghur Kingdom of Qocho used the Qianziwen (the Thousand Character Classic), Qieyun and it was written that "In Qocho city were more than fifty monasteries, all titles of which are granted by the emperors of the Tang dynasty, which keep many Buddhist texts such as the Tripitaka, Tangyun, Yupian, and Jingyin 經音."[1]