Not to be confused with Hanyu Da Cidian. 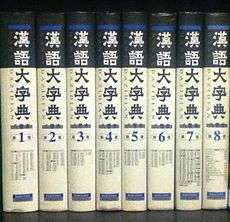 The Hanyu dazidian (simplified Chinese: 汉语大字典; traditional Chinese: 漢語大字典; pinyin: Hànyǔ dàzìdiǎn; literally: "Great Compendium of Chinese Characters") is a reference work on Chinese characters. A group of more than 400 editors and lexicographers began compilation in 1979, and it was published in eight volumes from 1986 to 1989. A separate volume of essays (Li and Zhao 1990) documents the lexicographical complexities for this full-scale Chinese dictionary. Besides the weighty 5,790-page first edition, there are 3-volume (1995) and pocket (1999) editions. A second edition (pictured at right) was published in 2006, and has a list of radicals printed on the dust jacket of each volume for quicker character look up.

The first edition of the Hanyu dazidian included 54,678 head entries for characters, and this was expanded to 60,370 in the second edition, published in 2010.[1] They give historical logographic forms such as oracle bone script, bronzeware script, and seal script. Pronunciation is glossed for Old Chinese (rime group), Middle Chinese (fanqie spelling), and Modern Standard Chinese (pinyin). The chronologically numbered definitions cite early Chinese dictionaries (especially the Shuowen Jiezi) and classic texts. Internal collating is by a 200 radical system, arranged by stroke count. Volume 8 has appendices, including rime tables for Old and Middle Chinese, variant characters, indexes, and addenda.

The Hanyu dazidian has become the international standard reference for Chinese characters; for example, the Unihan Database and the Wiktionary cite (volume/page/entry) references.