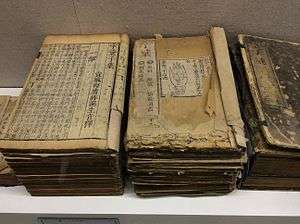 The Zìhuì (Chinese: 字彙/字汇; Wade–Giles: Tzu Hui; literally: "lexicon") is a Chinese dictionary, edited by Mei Yingzuo (梅膺祚) during the late Ming Dynasty and published in 1615, the forty-third year of the Ming Wanli Emperor. The work is divided into 14 scrolls (juan 巻) and contains a total of 33,179 Chinese characters.[1] It was the first dictionary to introduce the modern radical-stroke system. Whilst the ancillary first and last fascicles explain topics like stroke order and radicals, the main ones are named after the twelve Earthly Branches. The Qing Dynasty scholar Wu Renchen (c. 1628 – c. 1689) published the 1666 Zihui Bu (字彙補 "Zihui supplement").

Compared to the 540 section headers used in the earlier Shuowen Jiezi, the dictionary reduced the number of radicals (bushou 部首, literally 'section header') used for classification to 214 and included a number of non-standard character forms known as sú zì (俗字). The Zihui also formed the basis for the later Zhengzitong written by Zhang Zilie (張自烈). In order to make this lexicographical advance into the logically arranged 214 radicals, Mei Yingzuo simplified and rationalized the inefficient classification system used in the Shuowen Jiezi in which some radicals contain few characters. For instance, its "man radical" 男, which compounds the "field radical" 田 and the "power radical" 力, only lists three: nan 男 ("man; male"), sheng 甥 ("nephew; niece"), and jiu 舅 ("uncle; brother in law"). The Zihui more efficiently lists nan 男 under the "power radical", sheng 甥 under the "life radical" 生, and jiu 舅 under the "mortar radical" 臼.

The Zihui is renowned for establishing the system of 214 radicals still used in dictionaries today as the basis for the collation of Chinese characters. It also introduced the "radical-and-stroke sorting" principle of arranging characters under a radical according to the number of residual strokes. After the noted 1716 Kangxi Dictionary adopted these 214 graphic elements, they became commonly known as the Kangxi radicals rather than "Zihui radicals".