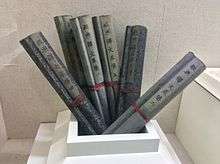 Jingdian Shiwen (simplified Chinese: 经典释文; traditional Chinese: 經典釋文; pinyin: Jīngdiăn shìwén; Wade–Giles: Ching-tien shih-wen; literally: "Textual explanations of classics and canons"), often abbreviated as Shiwen in Chinese philological literature, was a c. 582–589 exegetical dictionary or glossary, edited by the Tang dynasty classical scholar Lu Deming. This Chinese dictionary contains invaluable fanqie annotations for pronunciations of characters in the Chinese classic texts, the Taoist ones (Lao Zi and Zhuang Zi) as well as the Confucian ones. It also cites some ancient books that are no longer extant, and are only known through Jingdian Shiwen.