The Yunjing (traditional Chinese: 韻鏡; simplified Chinese: 韵镜; literally: "Mirror of Rhymes") is the oldest existing Chinese rhyme table – a series of charts which arrange Chinese characters in large tables according to their tone and syllable structures to indicate their proper pronunciations. Current versions of the Yunjing date to AD 1161 and 1203 editions published by Zhang Linzhi (張麟之). The Yunjing's original author(s) and date of composition are unknown. Some of its elements, such as certain choices in its ordering, reflect features particular to the Tang dynasty, but no conclusive proof of an actual date of composition has yet been found.

The Yunjing contains 43 tables (Chinese: 轉; pinyin: zhuǎn; literally: "turnings"), each of which tabulates combinations of a particular final rhyme (listed in rows) with various initials (listed in columns), in up to four tones, to show in a grid pattern all possible syllables. Empty circles on the grid denote that the author(s) were unaware of any word with that particular pronunciation. By locating a character in Yunjing, a reader could identify its initial consonant (by looking at its column) and its "rhyme", or main vowel and ending consonant (by looking at its row), and combine the two to obtain the word's pronunciation. Zhang Linzhi's prefaces list a total of 36 possible initial consonants (Chinese: 聲母; pinyin: shēngmǔ) – by comparison, modern Standard Mandarin only has 23.

Historical Chinese phonology uses the Yunjing as an accurate representation of Late Middle Chinese (10th – 12th century) phonology. The Yunjing's use of this system represents a significant advancement in the Chinese' analysis of their own language, and is believed to have been inspired by their studies of Sanskrit phonological treatises and Buddhist mantras written in the Siddham script during in the Sui and Tang dynasties. 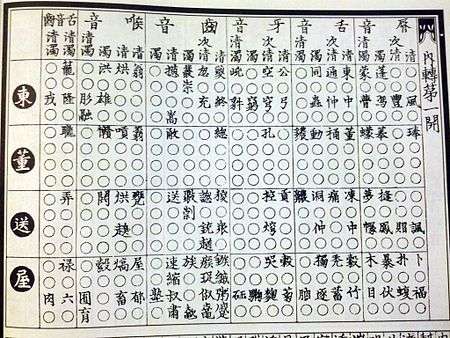 The first table of the Yunjing

Each large row is further subdivided into four grades or divisions (Chinese: 等; pinyin: děng), forming four rows within each larger row. Characters' placement in the first through fourth grade seems to be related to their medial (glide) and main vowel, though their exact distinction is unclear.[2]

Each table is divided into six large columns representing syllables' place of articulation:

Large columns are further subdivided into two to six smaller columns, which can represent one of four possible sub-categories:[3]

The Yunjing tables have only 23 columns – some columns represent more than one of the 36 possible initial consonants. Other rhyme tables, such as the Qieyun zhizhangtu (Chinese: 切韻指掌圖), do not combine the initials and have 36 full columns.[4]