Vandœuvre-lès-Nancy (French pronunciation: ​[vɑ̃dœvʁ lɛ nɑ̃si]) is a commune in the Meurthe-et-Moselle department in north-eastern France. Its inhabitants are called Vandopériens. 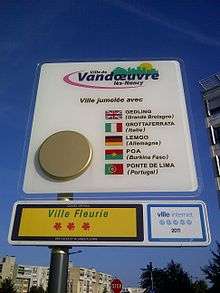 With 30,569 inhabitants (2012), Vandœuvre is the second-largest commune in the Meurthe-et-Moselle department, after the capital Nancy, of which it is a suburb. These two cities belong to the same municipal area: Grand Nancy.

Colorful, vibrant, dynamic, cosmopolitan, municipal market Vandoeuvre is the image of his city. Reputed This is one of the most important markets of North -East of France. It hosts Sunday morning 120 to 150 merchants and 6-8000 visitors.

Vandœuvre-lès-Nancy is twinned with