For other uses, see Verdal (disambiguation).

The municipality of Værdalen was established on 1 January 1838 (see formannskapsdistrikt). It is one of very few municipalities in Norway with unchanged borders since that date, although the spelling of the name was modified to Verdal.[2]

The coat-of-arms is from modern times; they were granted on 15 December 1972. They show a gold cross on a red background. The cross is taken from a large painting in the Nidaros Cathedral in Trondheim, in which the death of King Olav Haraldsson (Saint Olaf) is shown. He died in the Battle of Stiklestad, the site of which is in Verdal municipality. In the painting, he holds a shield with the typical cross. To commemorate the battle, the cross was taken as arms for the municipality.[4]

The Church of Norway has four parishes (sokn) within the municipality of Verdal. It is part of the Sør-Innherad deanery and the Diocese of Nidaros.

Early on the night of 19 May 1893, the most deadly landslide in modern Norwegian history, known as Verdalsraset, took place in Verdal. It killed 116 people and at least 500 animals when approximately 100 farms were swept away. A wet winter and several spring floods in the river made the quick clay under the topsoil in a large area of the valley turn into a fluid. The slide moved about 60,000,000 cubic metres (78,000,000 cu yd) of clay, completely reshaping the topography of the area, including moving the course of the river.[6]

This culture is known for young people interested in cars, spending most of their time improving, enhancing, and styling their cars, and then driving them for display on a particular route around the town centre. This is not only positive, as they do show some general disregard for common laws and regulations. People living in the town center are at times bothered by noise, usually music being played at high volumes from their cars.

Verdal is the location of the Stiklestad National Cultural Centre. The Saint Olav Drama appears here on an open stage every year during in July. The play centers on events leading up to the Battle of Stiklestad.[7][8] 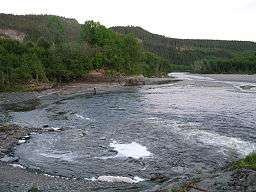 Part of the Verdal river (Verdalselva).

Verdal is centered on the Verdal valley. The river Verdalselva runs through the valley into the Trondheimsfjord at Verdalsøra. The rivers Helgåa and Inna join together at Vuku to form the Verdalselva. The lake Veresvatnet flows into the river Helgåa and the lake Innsvatnet flows into the river Inna. The large lake Leksdalsvatnet lies on the Verdal-Steinkjer border. The southern tip of the large Blåfjella–Skjækerfjella National Park lies in the northeastern part of Verdal. Rinnleiret is a beach area along the Levanger-Verdal border in the west.

All municipalities in Norway, including Verdal, are responsible for primary education (through 10th grade), outpatient health services, senior citizen services, unemployment and other social services, zoning, economic development, and municipal roads. The municipality is governed by a municipal council of elected representatives, which in turn elect a mayor.

The municipal council (Kommunestyre) of Verdal is made up of 35 representatives that are elected to every four years. Currently, the party breakdown is as follows:[9]

Offshore industry (Aker Verdal) and agriculture are two of the most important parts of Verdal's economy. Despite its small size, Verdal is a municipality with great personality and cultural integrity. After several lottery grand prizes were received by some lucky inhabitants of Verdal, it is also known as one of the great "Lotto-bygds" of Norway (Small places with high a concentration of lottery wins in the national game of Lotto).