Wednesday (IPA: /ˈwɛnzdeɪ/) is the day of the week following Tuesday and before Thursday. According to international standard ISO 8601 adopted in most western countries it is the third day of the week. In countries that use the Sunday-first convention Wednesday is defined as the fourth day of the week. It is the fourth day of the week in the Judeo-Christian calendar as well, and was defined so in the ancient Mesopotamian and biblical calendars. The name is derived from Old English Wōdnesdæg and Middle English Wednesdei, "day of Woden", ultimately a calque of dies Mercurii "day of Mercury". It has the most letters out of all the Gregorian calendar days.

Wednesday is in the middle of the common Western five-day workweek that starts on Monday and finishes on Friday.

See Names of the days of the week for more on naming conventions.

The name Wednesday continues Middle English Wednesdei. Old English still had wōdnesdæg, which would be continued as *Wodnesday (but Old Frisian has an attested wednesdei). By the early 13th century, the i-mutated form was introduced unetymologically.

The name is a calque of the Latin dies Mercurii "day of Mercury", reflecting the fact that the Germanic god Woden (Wodanaz or Odin) during the Roman era was interpreted as "Germanic Mercury".

The Latin name dates to the late 2nd or early 3rd century. It is a calque of Greek ἡμέρα Ἕρμου heméra Hérmou, a term first attested, together with the system of naming the seven weekdays after the seven classical planets, in the Anthologiarum by Vettius Valens (ca. AD 170).

In most of the languages of India, the word for Wednesday is Budhavãra—vãra meaning day and Budh being the planet Mercury. 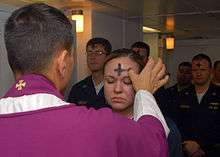 The imposition of ashes on Ash Wednesday

The Creation narrative in the Hebrew Bible places the creation of the Sun and Moon on "the fourth day" of the divine workweek.

Quakers traditionally refer to Wednesday as "Fourth Day" to avoid the pagan associations that exist with the name "Wednesday" or in keeping with the practice of treating each day as equally divine.

The Eastern Orthodox Church observes Wednesday (as well as Friday) as a fast day throughout the year (with the exception of several fast-free periods during the year). Fasting on Wednesday and Fridays entails abstinence from meat or meat products (i.e., four-footed animals), poultry and dairy products. Unless a feast day occurs on a Friday, the Orthodox also abstain from fish, from using oil in their cooking and from alcoholic beverages (there is some debate over whether abstention from oil involves all cooking oil or only olive oil). For the Orthodox, Wednesdays and Fridays throughout the year commemorate the betrayal of Jesus (Wednesday) and the Crucifixion of Christ (Friday). There are hymns in the Octoekhos which reflect this liturgically. These include special Theotokia (hymns to the Mother of God) called Stavrotheotokia ("Cross-Theotokia"). The dismissal at the end of services on Wednesday begins with these words: "May Christ our true God, through the power of the precious and life-giving cross...."

In Irish and Scottish Gaelic, the name for Wednesday also refers to fasting, as it is Dé Céadaoin in Irish Gaelic and Di-Ciadain in Scottish Gaelic, which comes from chéad, "first" and aoine, "fasting" which means "first day of fasting".[1]

In American culture many Catholic and Protestant churches schedule study or prayer meetings on Wednesday nights. The sports calendar in many American public schools reflects this, reserving Mondays and Thursdays for girls' games and Tuesdays and Fridays for boys' games while generally avoiding events on Wednesday evening.

In Hindu mythology, Budha is the god of Mercury (planet), mid-week Wednesday, and of Merchants and merchandise. According to the Thai solar calendar, the color associated with Wednesday is green.

In the folk rhyme "Wednesday's child is full of woe", reciting the days of the week, Solomon Grundy was 'Married on Wednesday.' In Winnie the Pooh and the Blustery Day, the disagreeable nature of the weather is attributed to it being "Winds-Day" (a play on "Wednesday"). In Richard Brautigan's In Watermelon Sugar Wednesday is the day when the sun shines grey. Wednesday Friday Addams is a member of the fictional family The Addams Family. Her name is derived from the idea that Wednesday's child is full of woe. Additionally, Wednesday sometimes appears as a character's name in literary works. These include Thursday's fictions by Richard James Allen and Neil Gaiman's novel American Gods. In the 1945 John Steinbeck novel Sweet Thursday, the titular day is preceded by "Lousy Wednesday".

Wednesday is sometimes informally referred to as "hump day" in North America, a reference to the fact that Wednesday is the middle day—or "hump"—of a typical work week.[2]

The astrological sign of the planet Mercury, ☿, represents Wednesday—Dies Mercurii to the Romans, it had similar names in Latin-derived languages, such as the Italian mercoledì (dì means "day"), the French mercredi, and the Spanish miércoles. In English, this became "Woden's Day", since the Roman god Mercury was identified by Woden in Northern Europe and it is especially aligned by the astrological signs of Gemini and Virgo. Wednesday is one of the 3 only days aside from Neptune and Pluto to be associated by another planet, which is Uranus.