On its establishment in 1912, the British Royal Flying Corps (RFC) was intended to be an inter-service, combined force of the British Army and Royal Navy. Given the rivalry that existed between the army and navy, new terminology was used, in order to avoid marking the corps out as having an army or navy ethos. While the term "wing" had been used in the cavalry, its more general use predominated. Accordingly, the word "wing", with its allusion of flight, was chosen as the term of subdivision and the corps was split into a "Military Wing" (i.e. an army wing) and a "Naval Wing". Each wing consisted of a number of squadrons (the term "squadron" already being used by both the Army and the Navy).

The Royal Flying Corps was amalgamated with the Royal Naval Air Service in 1918, creating the Royal Air Force. The RFC usage of wing was maintained in the new service.[1]

In most Commonwealth air forces, as well as some others, a wing is usually made up of three or four squadrons. In these air forces a wing is inferior to a group. Originally all wings were usually commanded by a wing commander (equivalent to a lieutenant colonel). From World War II onwards, operational flying wings have usually been commanded by group captains (equivalent to colonels), whereas ground-based wings have continued to be commanded by wing commanders.

A wing may also be used for non-flying units, such as the infantry forces of the RAF Regiment, (in which a wing equates to a battalion). Additionally, RAF stations are administratively divided into wings.

In the British Air Training Corps, a wing consists of a number of squadrons within a designated geographical area, usually named after the county in which it is based. In this context, a wing is inferior to a "region" which is made up of six wings. In all, there are 36 Air Training Corps wings in six regions within the United Kingdom, each of which is commanded by a RAFVR(T) wing commander.

In the 1990s, the Canadian Forces Air Command (the post-1968 RCAF until 2011) altered the structure of those bases under its control, declaring them to be Wings under the overall control of 1 Canadian Air Division in Winnipeg. For instance, CFB Trenton in Ontario was redesignated 8 Wing Trenton. The base commander of these bases (as well as other wings whose headquarters were stood up on bases not controlled by Air Command, such as 16 Wing at CFB Borden and 1 Wing at CFB Kingston) were re-designated Wing Commanders (or Wg Comd). As well as continuing their functions as the commanding officers of the bases they were assigned to, they also serve as formation commanders to all squadrons and units duly assigned to them by 1 CDN AIR DIV HQ and AIRCOM HQ (regardless if they are physically located on the base in question or elsewhere; as witness 12 Wing in Nova Scotia, which has one unit, 443 Maritime Helicopter Squadron, based at Patricia Bay near CFB Esquimalt in British Columbia, on the other side of the country from Shearwater). 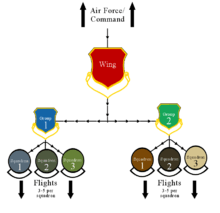 Diagram of a typical US Air Force wing organizational structure.

By comparison, in the United States Air Force, a wing is normally the organizational tier below a Numbered Air Force. Most USAF wings are commanded by a Colonel, but some are commanded by Brigadier Generals. USAF wings are structured to fulfill a mission from a specific base, and contain a headquarters and four groups: an operations group, a maintenance group, a medical group and a mission support group. Such a wing is referred to as a Combat Wing Organization, which is comparable to a brigade in the US Army. Other wings, such as Air Expeditionary Wings, exist for various other purposes, and their scope may extend to one base, one theater or worldwide.

In United States Air Force usage, a military organization above a squadron level (group, wing, air division, numbered air force, air component command, Major Command (MAJCOM)) is an establishment, while that of a squadron and lower (squadron, flight, detachment) is a unit.[2]

"The U.S. Army Air Service/U.S. Army Air Corps/U.S. Army Air Forces wings that existed before 1947 are not comparable with the wings of the USAF. World War II wings, for example, were very large administrative and operational organizations that usually controlled several combat groups and numerous service organizations, often located at widely scattered locations. Many of the World War II wings were redesignated as air divisions after the war. Modern wings, as we know them, began their existence with a service test of combat wings in 1947-1948. These wings were temporary Table of Distribution (T/D) organizations, each having a combat group (the only Table of Organization establishment of the wings), an airdrome group, a maintenance and supply group, and a station medical group. In 1948, at the end of the service test, HQ USAF replaced these T/D wings with permanent Table of Organization and Equipment (constituted) combat wings having a combat group, an air base group, maintenance and supply group, and a medical group.

"The Air Force has three basic types of wings: operational, air base, and specialized mission. According to Air Force Instruction 38-101 (1994):

In the Civil Air Patrol, there are 52 wings (each of the 50 states plus Washington, D.C. and Puerto Rico). Each wing supervises the individual groups and squadrons in that state, district or commonwealth, which are the basic operational units of the organization. Some wings, for example Delaware Wing, have only one group due to the small geographical and manpower size of the wing.

The United States Navy follows the British structure in that a Wing is an administrative formation commanding two or more squadrons of aircraft that are based on land. Several Wings are combined into a Naval Air Force. The several wings assigned to each Fleet Naval Air Force contol the wing's type squadrons. A Carrier Air Wing (CVW, formerly known as a Carrier Air Group) consists of several squadrons and is an operational formation that is based on an aircraft carrier. The squadrons of a CVW are also assigned to administrative type wings (such as Strike Fighter Wing Atlantic). Naval Air Forces are commanded by either a Rear Admiral (Upper Half) or a Vice Admiral and wings are commanded by Captains, with the title of Commodore. Carrier Air Wings are commanded by either a Navy Captain or a USMC Colonel with the title of "CAG" (Commander, Air Group), a legacy title from the former Carrier Air Groups.

Unlike their USAF counterparts, all USN and USMC air wings are tenant activities ashore and have no command responsibility for the installation at which they are normally based when not afloat of forward deployed. Naval air stations and Marine Corps air stations (and facilities) have separate commanding officers that are independent of the operational wing structure. Many mission support functions on these installations, such as personnel support and medical/dental facilities, are also independent of both the air wing and air station command structures and are independent tenant commands with their own commanding officers or officers-in-charge.

Equivalents in other countries

Most other Western air forces tend to follow the USAF nomenclature, with squadrons coming directly under groups. Immediately above this however, some air forces have foreign terms which are equivalent to a US "wing". For example: Geschwader in the German Luftwaffe; Polk (Regiment) in Russia, see Aviation Regiment; Stormo in Italy; and escadre in pre-World War II French Air Force, which is also the official French translation of a wing in modern-day Canadian Forces.