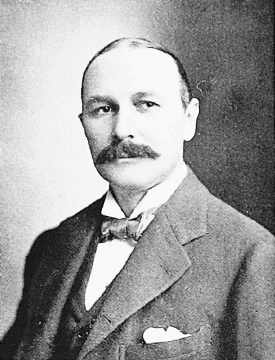 The Yale Golf Course, also known as The Course at Yale, is a golf course in New Haven, Connecticut owned at operated by Yale University. It is a fine example of early American golf course design, with large, deeply bunkered greens and narrow rolling fairways challenging the golfer. In 1988, Golf Magazine ranked Yale as the 71st most difficult course in the world. The 2013 Golfweek's Best Classic Courses list ranked Yale at #35 on the list.[1] In 2011, Golf Magazine name Yale Golf Course #71 on its Top 100 Courses in the United States.[2] In particular, the 432-yard (395 m) par-4 fourth hole and the 238-yard (218 m) par-3 ninth hole have been ranked among the 100 most difficult holes. In 2010, Golfweek named it the best campus course in the United States.[3]

The clubhouse is contemporary in design, but blends with the surrounding woodland. Inside, high ceilings and large windows offer magnificent views of the course and Connecticut's seasonal foliage, with a large dining room overlooking the third and fourth holes serving as the building's center. Gourmet food and fine wines are provided to the dining room and an adjoining sunny garden patio and deck by the club restaurant, Widdy's. The building also houses a unique hexagonal conference room with matching hexagonal conference table and a full service PGA pro shop, which contains the computerized national golf handicap system and sells, rents, and repairs the latest equipment, as well as selling golf apparel featuring Handsome Dan, the Yale bulldog mascot. Scott Ramsay is the course superintendent.[4] Yale Golf Professional Peter Pulaski was named Connecticut Section PGA Golf Professional of The Year in 2010.[5]

Yale opens the course to outside groups; Mondays during the golf season are reserved for private golf outings of 100 players or more.

In 1924, Mrs. Ray Tompkins donated to Yale 700 acres (2.83 km2) of swamp and woodland in memory of her husband, which were made into an 18 hole golf course by golf course architect Charles Blair Macdonald, in collaboration with Seth Raynor and Charles Banks, for a budget of $400,000. In his 1928 book "Scotland's Gift: Golf" Macdonald stated that “Today Yale has a classical course which is unexcelled in comparison with any inland course in this country or in Europe.” According to Macdonald historian George Bahto, The Mid-Ocean Club, the Yale Golf Club, the Links Golf Course, the Gibson Island Golf Course, the Deepdale, and the Creek Club were the only courses that Macdonald gave any attention to after 1917.[6]

The clubhouse, designed by Herb Newman, was dedicated on September 29, 1984 as a gift of the Prospect Hill Foundation, after whom it was named.

The fourth hole at the Yale golf course was rated by Tommy Armour as the ninth most difficult hole in the world, requiring two perfect shots to reach the green; an initial 250-yard (229 m) long drive over or along water and a wood or long iron shot to reach the slightly elevated green. The water hazard curves back into the fairway at 230 yards (210 m), to snare those who overshoot. The bunkers to the rear of the green are generally out of play, but the deep bunker to the front will require a special shot in order to complete the up and down. 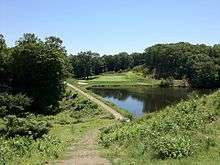 The ninth hole at the Yale golf course is the course's signature hole, world famous due to an unusual 65-yard (59 m) deep green with an 8-foot (2.44 m) depression separating front and back and a difficult tee shot requiring both distance and precision. This Biarritz Green is considered by some to be the best example of this type of hole in the world. It overlooks a lake with woods at both sides, requiring a straight shot with at least a 190-yard (174 m) carry to reach the green. If the ball reaches the depression the player faces an extremely difficult two putt; therefore to shoot par the tee shot must land on the correct area of the green near the pin, either front or back. The trap to the side of the green also leaves a tricky up and down.

Charles Banks stated in 1925 “This hole has its original on the Biarritz course at the famous watering hole in France of the same name… There is a 163 yard carry from the back tee. The green proper is behind a deep trench in the approach. The approach is about the same size as the green itself and is bunkered heavily on both right and left with water jutting in on the right front. The fairway is the lake… The green is heavily battered at the back and right and the whole psychology of the hole is to let out to the limit… Correct play for this green is to carry to the near edge of the groove or trench and come up on the green with a roll. The disappearance and reappearance of the ball in the groove adds to the interest of the play.” [8]

The eighteenth hole has been named as Connecticut's toughest par 5.[9] The hole plays 616 yards from the blue tees, 590 from the whites, and 541 from the reds. It is played up and over two separate hills, has two fairways, and has a number of blind shots.

Charles Banks stated in 1925 “This is a long fellow. To relieve the tedium of the drag through a long hole where distance is the only commendation, this hole has been broken up into three distinct parts. The first shot should carry over a shoulder at the right and at the angle of the dog leg. By carry the brow of this shoulder and making a roll over, the ball is brought to a smooth area of playing ground for the second. The second play to the top of the hill which has been leveled off and cut down so as to make the green visible from the second play area. The shot is to the green on the third. Should the player desire to avoid the hill he may play around the right with a penalty of increased distance. The two playing grounds for the second and third shots are practically two greens to shoot at but of twice or three times the area of ordinary putting greens.” [10]