Yale-NUS is predominantly a four-year, fully residential undergraduate institution. The first class, the class of 2017, consisted of 157 students entering in 2013. Over several years, the college intends to increase its student body to 1,000 students and its teaching faculty to 100.[5]Students select their majors (currently there are 15) at the end of their second year, after going through two years of the Yale-NUS Common Curriculum, which is "built from scratch by the inaugural faculty, draws on the strengths of established liberal arts traditions, while introducing our students to the diverse intellectual traditions and cultures of Asia and the world". Students graduate with a Bachelor of Arts degree with Honours or a Bachelor of Science degree with Honours from Yale-NUS College, awarded by NUS.

About 60 percent of students at Yale-NUS are Singaporeans and 40 percent are international students. In 2013, the admission rate dropped to 3% and the demographic remained consistent.[6] Apart from Singapore University of Technology and Design, Yale-NUS is the only other college in Singapore to follow a holistic admissions process similar to that followed by Yale and other American universities. Like both Yale and NUS, Yale-NUS follows a need-blind admission policy and offers financial aid on a full-need basis. Yale-NUS also distributes scholarships to some admitted students based on academic merit.[5]

Under the presidency of Richard Levin, Yale University began developing a "internationalization" strategy that included expanding financial resources for international students and study abroad programs, founding the Yale World Fellows and the Center for the Study of Globalization, and joining the International Alliance of Research Universities.[7] Administrators at Yale began considering international campus expansion in 2006,[8] and initially approached the United Arab Emirates about establishing an arts institute on Abu Dhabi's Saadiyat Island, developed in collaboration with the university's arts professional schools.[9][10][11] After Yale indicated that it was not willing to offer Yale degree programs at the proposed institute, the project was dropped.[12][13] 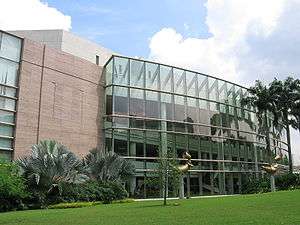 Levin and National University of Singapore President Tan Chorh Chuan discussed the concept of a joint liberal arts college at the 2009 World Economic Forum in Davos, Switzerland,[14] and eighteen months later, Levin and Yale Provost Peter Salovey circulated to the Yale faculty a prospectus for a liberal arts college in Singapore. Among the given reasons for the initiative were "develop[ing] a novel curriculum spanning Western and Asian cultures" and better preparing students for "an interconnected, interdependent global environment". [15][16]

Yale-NUS College was officially launched in April 2011. In July 2012, the College held its ground-breaking ceremony;[17] it enrolled its first class of students in 2013.[18] 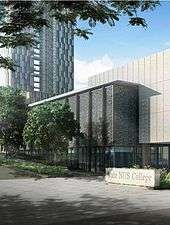 Rendition of the Yale-NUS College Campus

As of August 2016, Yale–NUS lists 114 faculty members, supplemented by 37 visiting faculty and 13 consulting faculty from Yale.[21]

Yale-NUS has a no-loan policy and provides need-blind admission to local and international students. The admission timeline is similar to that of colleges and universities in the US. Eventually Yale-NUS hopes to grow its class size to 250 students.

In all, Yale-NUS attracted more than 11,400 applications from over 130 countries.[23] The acceptance rate of the inaugural class was under 4 percent.[23] making the admission process comparable in selectivity to both Yale University and the most competitive faculties of National University of Singapore, and making it one of the most selective colleges in the world, as compared to Harvard (5.9%), Stanford (5.1%) and Columbia (6.9%).[24]

In an interview with the Kent Ridge Commons, Jeremiah Quinlan, the first Dean of Admissions, said, "In this inaugural batch, we’ve offered places to student body presidents, nationally ranked athletes, entrepreneurs who have set up non-profit organizations and their companies, math and physics Olympiad winners, future journalists and musicians."[26] In the fall of 2012, the College began accepting application for the Batch of 2017 from Singapore and the rest of the world. The admissions staff began a series of international recruitment events, spanning North America, Asia, Africa, and Europe. Students were allowed to apply through the Common Application, Yale-NUS portal and those who chose to apply to Yale College also had the option to share their application with Yale-NUS.

26 nationalities from six continents were represented in the first batch. 62 percent were Singaporean, while the rest were internationals, giving Yale-NUS one of largest international student populations in terms of percentage of total students. Thirty-two of the students were from Asia, Australia and New Zealand, while another 11 were from Europe, Africa, and South America. More than 10% of the student body came from North America with 13 students from the United States and 4 from Canada.

The founding instruction committee decided to implement a common curriculum, a set of interlinked courses for all students. Similar to the core curricula at Columbia University and University of Chicago, students will a number of set courses in their first year of study.

Students choose their majors at the end of their second year. Currently, there are 14 major fields of study. 38% of the courses are part of the common curriculum, 31% are required by the major, and 31% are electives and prerequisites for the major.

Upon graduation, students will have several options for further study: they can pursue a Double Degree program with NUS Law or a Master’s in Environmental Studies from Yale.[28] Students will receive special consideration to be admitted in the Silver Scholars Program of the Yale School of Management. The program provides the unique opportunity to enter the Yale MBA program immediately after undergraduate study to move more quickly toward career goals. Duke-NUS, Singapore’s first US-style graduate-entry medical school, has also expressed interest in admitting Yale-NUS graduates for their Doctor of Medicine (MD), PhD and MD/PhD degree programs.[29]

Yale-NUS's student life is modelled on the residential colleges of Yale. There are three residential colleges named Saga, Elm and Cendana. Each has its own dining hall, courtyard, student suites, sky-gardens, faculty residences, study-spaces, intramural teams, and butteries, informal student-run eateries that are a Yale tradition. Students live in suites of six single rooms. These small-scale communities are arranged vertically in residential towers, which contain both student suites and faculty apartments. Floors are grouped into neighborhoods, each with its own skygarden, a landscaped outdoor space for high-rise buildings that was pioneered in Singapore.

The residential community includes a rector (equivalent to the position of a college master at Yale), a vice rector (a dean), faculty fellows, advisors, rector's aides, and distinguished visiting fellows. Students will expand their social and leadership skills while enjoying the support of "nested academic communities."

A courtyard at Yale-NUS

As the first freshmen transition into the collegiate living experience, they will be aided by Dean's Fellows, a group of recent college graduates picked from various higher educational backgrounds, including Amherst, Carleton, Princeton, Reed, Mt. Holyoke, Yale, and NUS.

In the summer of 2013, the inaugural class students visited Yale for a three-week immersion program.

A view of the three residential colleges.

The Yale-NUS campus is adjacent to NUS University Town[30] and was completed in January 2015.[31] It consists of a central campus green flanked by academic and administrative buildings. The campus was designed by architectural firms Pelli Clark Pelli and Forum Architects (a Singaporean architecture studio), who state that "its architectural style blends the collegiate traditions of Yale with the Southeast Asian cultures through its modernist style ornamented by metalwork patterns inspired by southeast Asian textiles."

The campus was designed to achieve the highest rating under the Building and Construction Authority’s Green Mark, Singapore’s benchmark for sustainable design. In addition to visible sustainable design strategies such as the eco-pond and the frequent use of natural ventilation, the campus will integrate advanced building systems for energy efficiency.[32]

Observers in the New York Times and the Chronicle of Higher Education see Yale’s move as part of a larger movement of the globalization of higher education.[33][34] Yale faced criticism for its involvement in Singapore because of the government's restrictions on freedom of assembly and ban on homosexual activity.[35] Fareed Zakaria, a CNN host and fellow of the Yale Corporation at the time, supported the venture, saying that "Singapore has a great deal to learn from America, and NUS has a great deal to learn from Yale."[36] Tommy Koh, former Singaporean Ambassador to the United Nations, called it a "timely and visionary initiative" [37]

Faculty expressed themselves in the pages of Yale Daily News. Seyla Benhabib, a political philosopher at Yale, calling it a "naïve missionary sentiment," asked, "Do we need to go to Singapore to advance interdisciplinarity and a revival of the liberal arts?"[38] The chairs of the faculty search committee responded, "the new college will require faculty to rethink their pedagogical assumptions and to consider such innovations as integrated and interactive approaches to science; writing across the curriculum; computation, computer simulations and interpretation of large data sets; and the honing of quantitative, communication and other skills."[39] Howard Bloch, a Sterling Professor of French, said that "As a nexus between India, China and the West, Singapore’s location favors an important conceptual realignment of the humanities that will be a long time coming to the home campus in New Haven — that is, a synthesis of the ways that ideas and creative works of East and West intersect historically as well as conceptually with each other."[40]

A group of professors critical of the project characterize the endeavor of "globalizing" a "specious one," saying that the graduates "will have to be conformist, dissent-averse managers and executives who serve the global profit motive."[41] Marvin Chun, the master of Berkeley College and educated in South Korea, disagreed, asking "Will Yale-NUS be denied to numerous students around the world like me who lack the hyper-talent or mega-resources needed to study abroad at a place like Yale?"[42]

Others are concerned that Yale-NUS would dilute the Yale name. For Michael Fischer, professor of computer science, since Yale-NUS will not grant Yale degrees, the value of a Yale degree becomes diminished, and that the joint governing board does not "make Yale-NUS a part of Yale any more than does Levin's service on the board of directors for American Express make American Express a part of Yale."[43] Haun Saussy stated says that "It’s in the spirit of the motto "Lux et veritas" — my light is not diminished when my neighbor lights his candle at mine, and a truth becomes more powerful, not less, when it is shared." [44]

In spring 2012, the Yale College faculty passed a resolution stating, "We urge Yale-NUS to respect, protect and further principles of non-discrimination for all, including sexual minorities and migrant workers; and to uphold civil liberty and political freedom on campus and in the broader society".[45] In the summer, prompted by a Wall Street Journal report that students would not be allowed to stage protests or form political parties, Human Rights Watch stated that it disapproved such restrictions.[46][47] John Riady, an Associate Professor of Law at the Pelita Harapan University in Indonesia, defended the venture, stating that "Singapore and Asia are in the middle of great transitions, and Yale has an opportunity to shape that process and put its stamp on a rising continent. In fact, Yale would be doing the cause of liberty a disservice by dropping the project."[48]