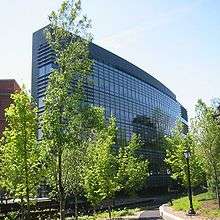 Establishment in the Sheffield Scientific School (1852–1919)

Engineering education at Yale began more than a century before the founding of a School of Engineering. In the first half of the nineteenth century, chemistry professor Benjamin Silliman made fundamental contributions to the fractional distillation of petroleum, and his son, chemistry professor Benjamin Silliman, Jr., commercialized the process as a fuel source.[1] In 1852, William A. Norton moved from Brown University to become Yale's first Professor of Civil Engineering, which established a faculty of engineering at Yale.

In 1854, two years after Norton's appointment, engineering became part of the new Scientific School, renamed the Sheffield Scientific School in 1860 in honor of Joseph Earl Sheffield. In 1863, Yale granted the first American Ph.D. in engineering to J. Willard Gibbs, who later taught at Yale and became one of the founders of the field of thermodynamics.

In the first half of the twentieth century, a gradual reorganization of engineering education at Yale took place with the integration of Sheffield programs with Yale College and Graduate School and, in 1932, the creation of a School of Engineering. In 1961, the school was reduced to a department within Yale College.

Though a new Marcel Breuer–designed engineering building was opened in 1970, the demotion of school caused Yale's engineering programs to atrophy.[3] University administrators discussed entirely restructuring, or possibly eliminating, the faculty in the early 1990s.[3][4] The appointment of D. Allan Bromley as Dean of Engineering in 1994 provided much-needed momentum.[3] Bromley, a nuclear physicist and science adviser to U.S. President George H. W. Bush, was a forceful advocate for engineering at Yale.[3] New programs in biomedical and environmental engineering were introduced during his tenure.[5] Bromley also instituted the Sheffield Fellowship, to recognize technological leaders, the Sheffield Distinguished Teaching Awards, and the "Select Program", a five-year combined B.S. M.Eng. degree program, all named to honor the Sheffield Scientific School.

In 2000, Paul A. Fleury was appointed Dean. The department received renewed university investment beginning in the same year, when Yale President Richard Levin announced a $500 million capital investment in sciences and engineering at Yale.[4][6] The Malone Engineering Center was opened in 2005 to expand campus facilities for biomedical engineering and teaching, establishing a separate Department of Biomedical Engineering.[7] The building was named by businessman John C. Malone for his father.

Vanderlick was reappointed by the University for a second term in 2013.[13] In March 2015, Yale’s Department of Computer Science joined the University’s four engineering departments as part of the School of Engineering & Applied Science.[14] In June 2016, construction began on an underground teaching concourse that will physically link the Department of Computer Science to other main engineering buildings. The 10,000-square-foot space is designed specifically for undergraduate engineering laboratories and hands-on learning experiences.[14]