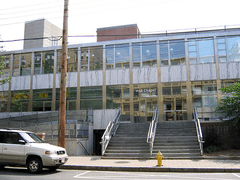 The Yale School of Art is the art school of Yale University. Founded in 1869 as the first professional fine arts school in the United States, it grants Masters of Fine Arts degrees to students completing a two-year course in graphic design, painting/printmaking, photography, or sculpture.

U.S. News & World Report's 2012 and 2013 rankings[1] rated Yale first in the United States for its Masters of Fine Arts programs. The Yale Daily News reported in February 2007 that 1,215 applicants for its class of 2009 sought admission to 55 places. The Yale Alumni Magazine reported in November 2008 that the School admitted sixty-five applicants from among 1,142 for its class of 2010, and that fifty-six enrolled.

Any student applying to the school must have an exceptional undergraduate record as well as a complete body of work for presentation. This is further followed by an essay and recommendations. The complete process for an applicant requires great preparation and the process must be completed in accordance with strict guidelines established by the school.[2]

The study of the visual arts at Yale began with the opening of the Trumbull Gallery in 1832. The Gallery was founded by portrait artist Colonel John Trumbull with the help of Professor Benjamin Silliman, a prominent chemist.[3]

In 1864, Augustus Russell Street donated funds for the establishment of a School of Fine Arts at Yale. In his bequest, Street stipulated that it be “a school for practical instruction, open to both sexes, for such as propose to follow art as a profession.”[4] The program was placed under an art council, one of whose members was the painter-inventor Samuel F. B. Morse, a graduate of Yale College. Yale alumnus Andrew Dickson White was petitioned by the school's faculty to become the first dean, but instead opted to be the first president of Cornell University. A new building for the school, Street Hall, was completed in 1866.[5] 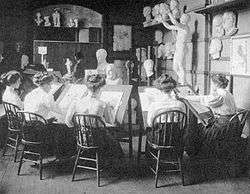 Students taking a drawing course in Street Hall circa 1905

When the School of Fine Arts opened to students in 1869, it was the first of its kind affiliated with a tertiary institution in America.[6] A three-year course in drawing, painting, sculpture, and art history was inaugurated. Two women—Alice and Susan Silliman, both daughters of Benjamin Silliman, Jr.—enrolled in the first cohort of three students, and the School of Fine Arts became the first of Yale's schools to allow co-educational instruction.[4] For the next four decades, more than three-quarters of its students were women.[4][7] Early on, the three-year program yielded a certificate of completion. A degree program was created in 1891 with the authorization of a Bachelor of Fine Arts degree by the university's governing body.[4]

Several other arts disciplines were grafted to the School of Fine Arts and later budded as independent schools. Architectural instruction was begun in 1908 and was established as a department in 1916 with Everett Victor Meeks at its head. The architecture program quickly became dominant, especially under painter Eugene Savage's efforts to reframe painting and sculpture as "architectural arts" in the 1920s.[8] Drama, under the direction of George Pierce Baker and with its own separate building, was added in 1925 and continued to function as a department of the School until it became an independent school in 1955.

The department of graphic design (initially called graphic arts) was begun in 1951 under the direction of Alvin Eisenman. It was the first graduate program in graphic design in the United States. Joseph Albers came to the school in the same decade, and under his chairmanship the Departments of Painting and Sculpture were renamed the "Department of Design."[6]

In 1972, the School of Art and the School of Architecture, were split. They continued to share the Art and Architecture building until 2000. In 2000, the art school opened a new building at 1156 Chapel Street, near the Rudolph building. It is called Green Hall and houses BFA and MFA students in photography and graphic design. The painting MFAs have their own building behind Green Hall; sculpture MFAs, who used to be in Hammond Hall across campus (since demolished), are now in a new sculpture building at 36 Edgewood, designed by Kiernan Timberlake and Associates.[9]

The degree of Master of Fine Arts is the only degree offered by the School of Art. It is conferred upon recommendation of the faculty after successful completion of all course work in residence and after a faculty-approved thesis presentation. The minimum residence requirement is two years. All candidates’ work is reviewed by faculty at the end of each term. Yale College, the undergraduate division of Yale University, offers a Bachelor of Arts degree program with a major in Art. Undergraduate applicants wishing to major in Art at Yale must apply to Yale College directly.

The program in art offers courses that, through work in a variety of media, provide an experience in the visual arts as part of a liberal education as well as preparation for graduate study and professional work. Courses at the 100 level stress the fundamental aspects of visual formulation and articulation. Courses numbered 200 through 499 offer increasingly intensive study leading to greater specialization in one or more of the visual disciplines such as graphic design, painting/printmaking, photography, and sculpture.

The prerequisites for acceptance into the major are a Sophomore Review, which is an evaluation of work from studio courses taken at Yale School of Art, and five terms of introductory (100-level) courses. Four must be completed at the time of the Sophomore Review. Visual Thinking (Art 111a or b) and Basic Drawing (Art 114a or b) are mandatory. In exceptional cases, arrangements for a special review during the junior year may be made with the director of undergraduate studies in art.

For graduation as an art major, a total of fourteen 14 course credits in the major field is required. These fourteen course credits must include the following: (1) five prerequisite courses at the 100 level (including Visual Thinking and Basic Drawing); (2) five 200-level and above courses; (3) the Junior Major Seminar (Art 395a) or Critical Theory in the Studio (Art 201b); (4) the Senior Project (Art 495b); and (5) two courses in the History of Art. Suggested program guidelines and specific requirements for the various areas of concentration are available from the director of undergraduate studies. A suggested program guideline is as follows:

The graduate student’s primary educational experience is centered on studio activity. Supporting this are structured courses such as drawing, filmmaking, and the relativity of color.