The 2011–12 Bahrain First Division League is the 55th edition of top level football in Bahrain. Al-Muharraq are the defending champions. The season started on 1 December after numerous postponements to the original fixture list and finished on 4 June with the relegation/promotion playoff match.

The 2010–11 league campaign was heavily disrupted by the Bahraini uprising in February and a number of games were cancelled or awarded to the opposition team. As it became clear that the league would struggle to continue with the number of postponements, it appeared that Al-Shabab and Malkiya either withdrew from the championship or suspended from the championship which resulted in automatic relegation.

These relegated clubs were replaced by East Riffa Club, returning after one season away from the top flight and Bahrain Club who return for the first time since the 2008–09 Bahrain Classification Soccer League season. 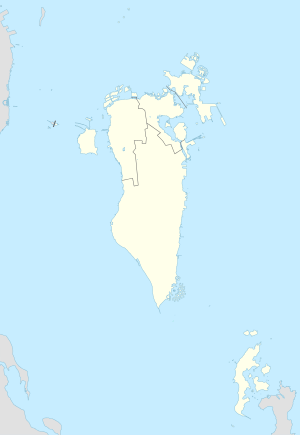 Updated to games played on 27 May 2012.
Source: Soccerway
1 ^ The home team is listed in the left-hand column.
Colours: Blue = home team win; Yellow = draw; Red = away team win.
For coming matches, an a indicates there is an article about the match.