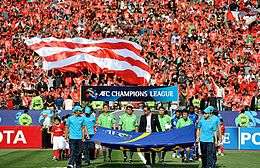 The 2012 AFC Champions League was the 31st edition of the top-level Asian club football tournament organized by the Asian Football Confederation (AFC), and the 10th under the current AFC Champions League title. As in previous years, Nike provided the official ball for all matches with a new Nike Seitiro model used throughout the season.

Ulsan Hyundai from South Korea won their first title, defeating Al-Ahli from Saudi Arabia with a 3–0 win in the final, and qualified for the 2012 FIFA Club World Cup.[3][4]

The AFC has approved criteria for participation in the 2011 and 2012 seasons.[5] The final decision date was set after the Executive Committee meeting in November 2010.[6]

On 30 November 2009, the AFC announced 12 more MA's that were keen to join the ACL, in addition to ten participating national associations. Singapore later withdrew. The full list of candidate associations were as follows:

Note: India, Singapore, Thailand and Vietnam have clubs taking part in play-offs to qualify for the group stages of ACL in 2010.

It was originally announced that the allocation for entry to the 2012 ACL would stay the same as the previous three seasons with the exception of Vietnam, who were disqualifed, and their previous playoff slot was awarded to Qatar.[8] However, following the AFC Executive Committee meeting in November 2011, it was decided that the number of slots for each association to be changed based on evaluation of the AFC Champions League criteria that took place in 2011.[9]

The draw for the qualifying play-off was held in Kuala Lumpur, Malaysia on 6 December 2011.[18] The winners advanced to the group stage, while the losers of the final round advanced to the AFC Cup group stage,[19] except the loser of the match between Adelaide United and Persipura Jayapura.[20]

The draw for the group stage was held in Kuala Lumpur, Malaysia on 6 December 2011.[21] Clubs from the same country may not be drawn into the same group. The winners and runners-up of each group advanced to the knockout stage.[19]

The matchups for the round of 16 were decided based on the results from the group stage.[22] Each tie was played as one match, hosted by the winners of each group (Team 1) against the runners-up of another group (Team 2).[19]

The final of the 2012 AFC Champions League was hosted by one of the finalists, decided by a draw.[19] According to the draw on 14 June 2012, the winner of semi-final 2 would host the final.[25] Therefore, Ulsan Hyundai was the home team.