Liga Primer Indonesia (LPI) (sometimes translated to English as Indonesian Premier League) was an Indonesian independent football leagues held in 2011. It was managed by Konsorsium Liga Premier Indonesia and PT Liga Primer Indonesia and was not recognized (initially) by the PSSI.[4] Nineteen clubs were participated[5] in its inaugural and only season which was running from January to May 2011. First kick-off was held on 8 January 2011 in Manahan Stadium, Solo, Central Java. Despite its original full-season schedule,[6] the league was then stopped during the half-season break when Persebaya 1927 was currently leading the table.

On 17 September 2010, 20 Indonesian football clubs together with the National Football Indonesian Reform Movement (GRSNI) issued a declaration in Jenggala Graha, Jakarta. It was led by Arifin Panigoro, a local businessman. The declaration essentially related to the concerns of the conditions of national football clubs over the collapsing condition of the national football.

To achieve independence, Liga Primer Indonesia provides assistance consortium in forms of the initial capital for each participating club. With this assistance, the clubs are expected to run without funds from dependence on fund local Government Budget (APBD). The initial capital will vary between clubs according to the audit results that have been held.

Additionally, the LPI embrace the principle of division of revenues in a transparent and accountable to the club participants. According to agreement with the club, LPI revenue sharing will be based on two schemes, namely schemes to league revenues (e.g.: sponsor the league, broadcasting rights, etc.) and schemes for income matches (e.g.: local sponsorship, broadcasting rights, tickets, etc.).

The inaugural 2011 season started on 8 January 2011. Before, LPI hosted a pre-season competition[8] in Bogor, Solo and Semarang.

On 11 April 2011, the FIFA Normalisation Committee charged with running Indonesian football has officially recognized Liga Primer Indonesia. The continuation of Liga Primer Indonesia will be decide after the Indonesia FA has been formed.[9] By this decision, the competition and all players involved are officially recognized by PSSI as well as FIFA and eligible to play in the national team.

The inaugural season begun with 19 teams, four of the 19 were defected from PSSI sanctioned league of whom three (PSM Makassar, Persema Malang and Persibo Bojonegoro) defected from the top tier Indonesia Super League, and Persebaya from the second tier Liga Indonesia Premier Division.

TWV
Locations of the teams in the 2011 Liga Primer Indonesia

Note: Flags indicate national team as has been defined under FIFA eligibility rules. Players and Managers may hold more than one non-FIFA nationality. 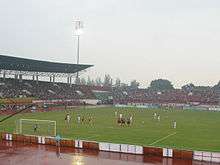