The Canadian federal election, 2015 (formally the 42nd general election) was held on October 19, 2015, to elect members to the House of Commons of the 42nd Canadian Parliament.

The writs of election for the 2015 election were issued by Governor General David Johnston on August 4. The ensuing campaign was one of the longest in Canadian history.[2] It was also the first time since the 1979 election that a Prime Minister strove to remain in office into a fourth consecutive Parliament.

The Liberal Party, led by Justin Trudeau, won 184 seats, allowing it to form a majority government with Trudeau becoming the next Prime Minister.[3] Trudeau and the rest of his cabinet were sworn in on November 4, 2015.[4] The Conservative Party, led by incumbent Prime Minister Stephen Harper, won 99 seats, becoming the Official Opposition after nine years on the government benches. The New Democratic Party, led by Thomas Mulcair, won 44 seats, becoming the third-largest party in the House of Commons, after having formed the Official Opposition following the 2011 election.[5] Minor parties won 11 seats: the Bloc Québécois won 10 seats and the Green Party one seat.

The Liberal Party's increase of 148 seats from the previous election was the largest-ever numerical increase by a party in a Canadian election. The Liberals' success came at the expense of 60 seats from the Conservative Party and 51 seats from the New Democratic Party, and was the largest total number of seats won by a single party since the 1984 election. Prior to the campaign, the Liberals had held only 36 seats—the fewest seats ever held at dissolution by any federal party that won the following election. The Liberals also became the first federal party in Canadian history to win a majority of seats without having been either the governing party or the Official Opposition in the previous parliament, and this was only the second time a party went from having the third-most number of seats to the most number of seats (the first being in 1925). It was the second best result for the Liberals, the best being the 1949 election.

Every party represented in the House of Commons except the Liberal Party recorded a decrease in its popular vote share. Following the election, Harper conceded defeat to Trudeau and resigned as leader of the Conservative Party.[6] Gilles Duceppe resigned as leader of the Bloc Québécois shortly after the election on October 22, 2015. Thomas Mulcair announced his intention to remain leader of the NDP, but was forced to step down after losing a party vote on his leadership in Spring 2016.

The 2011 federal election resulted in the continuation of the incumbent Conservative government headed by Stephen Harper, while the New Democratic Party (NDP) became Official Opposition and the Liberal Party became the third party. The Bloc Québécois won four seats and the Green Party won one seat. Liberal leader Michael Ignatieff and Bloc leader Gilles Duceppe resigned shortly after failing to win their own ridings. The Bloc Québécois lost official party status by failing to attain the minimum seats needed (12). Bob Rae was chosen as interim leader of the Liberal Party. In July 2011 Jack Layton, suffering from cancer, temporarily stepped down as leader of the NDP because of his illness, indicating his intention to return to the job for the reconvening of Parliament in September. Weeks later Layton died of cancer and was given a state funeral. In March 2012 Tom Mulcair was elected leader of the New Democratic Party. In April 2013 Justin Trudeau was elected leader of the Liberal Party. Bloc Québécois leader Daniel Paillé stepped down in December 2013 and was eventually replaced in June 2014 by Mario Beaulieu, who in turn was later replaced in June 2015[7] by Duceppe. In late 2014, MPs Jean-François Larose of the NDP and Jean-François Fortin of the Bloc formed the new political party Strength in Democracy.

As set forth in the Fair Representation Act,[8] the number of seats in the House of Commons to be contested in the 42nd Canadian federal election was 338, an increase of 30 seats from the 308 seats comprising the House of Commons of Canada of the 41st Parliament of Canada, at its dissolution.[9]

Prime Minister Stephen Harper requested writs of election for a federal general election from Governor General David Johnston on August 2. The official proclamations were issued on August 4.[10] The date of the vote is determined by the fixed-date Canada Elections Act.[11] At 11 weeks, the campaign was the longest in modern Canadian history.[12]

As a result of the 2012 federal electoral redistribution, the number of electoral districts was increased to 338, with additional seats based on population assigned to Alberta (6), British Columbia (6), Ontario (15), and Quebec (3). 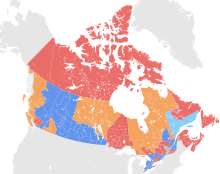 A polling station on election day 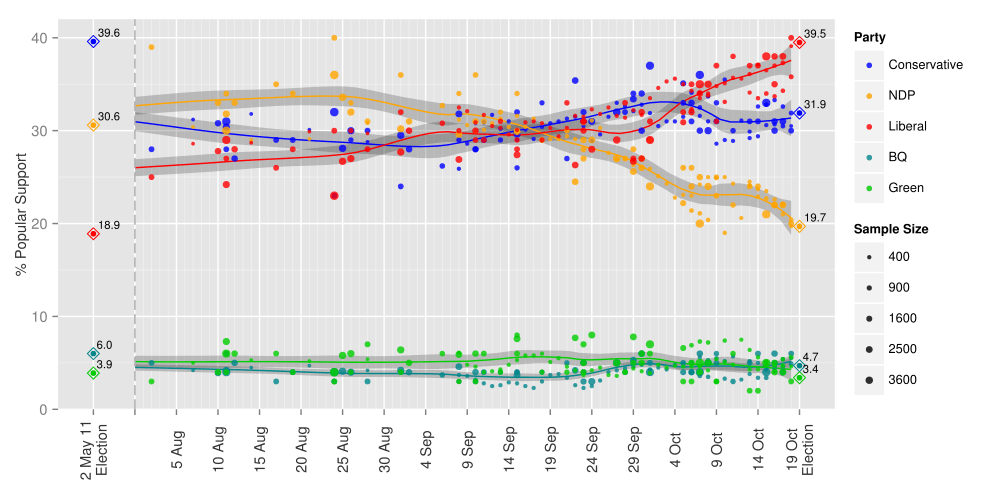 Evolution of voting intentions during the campaign leading up to the 2015 Canadian federal election to be held on October 19, 2015. Points represent results of individual polls.

Before the campaign, there were no limits to what a political party, candidate, or third party (corporations, unions, special interest groups, etc.) can spend: spending rules are only in force after the writs have been dropped and the campaign has begun. Because the election period is set longer than the standard 37-day election period, spending limits are increased in proportion to the length of the period.[75]

Reimbursements for political parties and candidates

The New Democratic Party stated that it collected greater than $9 million in the third quarter of 2015, the most it ever received from donors, and greater than the quarterly record established by the Conservative Party in 2011.[83]

At the riding level, financial reports in each of the 338 constituencies showed that in Conservative electoral district associations ended 2014 with net assets totalling more than $19 million, Liberal riding associations reported a total of about $8 million in net assets, and NDP associations more than $4.4 million.[84]

Individuals are able to give up to $1,500 to each political party and an additional $1,500 to all the registered associations, nomination contestants and candidates of each registered party combined.[85]

Hours after conceding defeat on election night, incumbent Prime Minister Stephen Harper resigned as leader of the Conservative Party, though he announced his intention to remain in the new parliament as a backbencher after being elected in the riding of Calgary Heritage.[88][89] The Conservative caucus met on November 5, 2015, and elected former health minister and Alberta MP Rona Ambrose as interim leader of the party, and hence, interim Leader of the Official Opposition.[90] The next Conservative Party of Canada leadership election will be held on May 27, 2017.[91] Following his swearing in on November 4, 2015, Prime Minister Justin Trudeau announced that parliament would reconvene on December 3, 2015 with the Speech from the Throne to follow on December 4.[92]

On November 4, 2015, the following individuals were sworn in as cabinet ministers of the 29th Canadian Ministry, in addition to Justin Trudeau as Prime Minister and Minister of Intergovernmental Affairs and Youth:[98][99][100]