The Myanmar national football team (Burmese: မြန်မာအမျိုးသားဘောလုံးအသင်း) is the national team of Myanmar and is controlled by the Myanmar Football Federation. It was known as the Burma national football team until 1989, when Burma was renamed Myanmar. It finished second in the 1968 Asian Cup. They have participated in the Summer Olympics in 1972 and in the Asian Games. The Burma team was dominant in Asia in the 1960s and 1970s, having won the Asian Games twice; in 1966 and 1970, and the football event of the Southeast Asian Games on five successive occasions; in 1965, 1967, 1969, 1971 and 1973. Since then, Myanmar's highest achievement is the silver medal in 1993. Myanmar played its first World Cup qualifiers in 2007, losing 0–7 and 0–4 to China.

Burma sent players to the Philippines in 1954 Asian Games and captured a bronze medal, behind Taiwan (gold) and South Korea (silver); this fact marked the beginning of the golden age. On the other hand, the nation was not expected to contend for a medal in the Olympic-type Asian Games. In the meantime, this delegation became the first male Burmese team to win a continental medal. But this was only the beginning. Then, against all odds, the team of Burma bettered their 1954 effort by winning the gold medal in the Asian Games, which were held at Bangkok in the mid-1960s. In that tournament, Burma beat Iran in the gold-medal game.

The 1966 Asian Games gold medal winning squad established itself as one of the two best teams in the region as it finished as runner-up to Iran at the 1968 Asian Cup. After claiming silver in 1968, the men's soccer team had a strong performance in the early 1970s as it won the right to compete in the 1972 Summer Olympics, which were held at Munich (West Germany), upon being one of the three finalists in the Asian tournament. Despite losing almost all their matches, the Burmese players captured the Fair Play Award. The following year, the nation earned its fifth consecutive Southeast Asian Games gold medal at Singapore City (Kuala Lumpur'65, Bangkok'67, Rangoon'69, and Kuala Lumpur '71).

Three years before that, the national team wrote perhaps their most important chapter: they captured the continental title for the second time in a row, after the Burmese Olympic Committee sent footballers to Thailand for the 1970 Asian Games. Burma thus became the second soccer squad to win the Asian tournament twice. Certainly, they were declared national heroes in Rangoon, the then capital of Burma, with their second consecutive gold medal in men's soccer.

During this golden era, Burma produced many talented footballers. One among them is Suk Bahadur who is now considered as the greatest Burmese footballer of all times for his outstanding contribution to Burmese football.

Over the following years, due in large part to several problems in the country, the national side was not able to successfully defend its Asian title.[3] 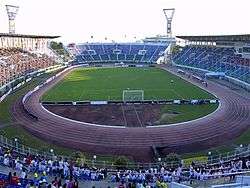 The national team plays most of its home matches in Thuwunna Stadium in Yangon, Myanmar. The stadium is larger and more up-to-date than Bogyoke Aung San Stadium. It was upgraded to a seating capacity of 50,000 spectators from capacity of 32000 in 2013.[4]

Myanmar's home kits is a red shirt with red shorts and red socks while the away kits is a white shirt with white shorts and white socks. The kits are currently manufactured by FBT after reaching an agreement with the FA in 2015.

This competition was formerly known as the Tiger Cup

The following players have been called up to the squad for the 2016 AFF Championship.

The following players have also been called-up recently.