During World War II, as the 36th Bombardment Squadron the squadron conducted special operations and electronic warfare missions over Europe from 1943 until the end of the war.

1940-1941 Reconnaissance and photo-mapping of Bering Sea and Alaska using B-18 Bolos. 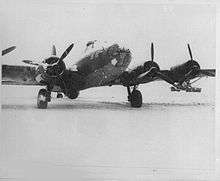 Assigned to Alaska where served to defend the territory after Japan attacked the United States at the end of 1941. The unit helped force the withdrawal of Japanese ships that attacked Dutch Harbor in June 1942, flew missions against occupied Kiska until the Japanese evacuated that island in August 1943,

In November 1943, a unit was formed to clandestinely deliver agents and supplies into Nazi-occupied Europe for the Office of Strategic Services (O.S.S.). To address this mission, the 36th Bombardment Squadron with specially modified B-24 Liberators were formed and activated at RAF Alconbury, England. It was attached to the 482nd Bombardment Group. This was the beginning of Operation Carpetbagger.

The purpose of the Carpetbagger project was to fly special operations missions which entailed delivering supplies to resistance groups in enemy occupied countries.

Owing to lack of sufficient facilities at Alconbury, in mid-December the squadron was reassigned to the Eighth Air Force Composite Command (Special Operations Group), (remaining attached to the 482d Bomb Group) and moved to RAF Watton (Station 376), near Thetford in Norfolk. The move to RAF Watton did not prove to be fortuitous. The heavy B-24s were incompatible with the grass runways and muddy hard standings there and were forced to move back to Alconbury in January 1944.

A new airfield under construction in the depths of rural Northamptonshire, RAF Harrington (Station 179) proved ideal for Carpetbagger operations. The advanced echelon of the squadrons moved into Harrington on 25 March 1944. On 1 April the squadron was assigned to the 801st Bombardment Group (Provisional).

In August 1944, the 801st Bombardment Group was absorbed by the 492d Bombardment Group (Heavy). The 492d was a "hard luck" B-24 group which had lost 52 aircraft to enemy action in only 89 days, suffering 588 men killed or missing. Rather than try to rebuild the shattered group, the group was stood down and the surviving members were reassigned to other units in theater. The operational squadrons of the 801st were stood down and redesignated as the squadrons assigned to the 492d. The 36th Bomb Squadron's personnel and equipment were redesignated as the 856th Bombardment Squadron, and the 36th was reassigned to the VIII Fighter Command as an unattached unit without equipment or personnel.

The radar countermeasure effort came under RAF Bomber Command where they performed a variety of special operations activities. The missions included Window (Chaff), Jostle, Carpet, Mandrel, and other ramifications. Many of the jamming systems were developed and tested by Allied scientists associated with the Telecommunications Research Establishment, namely the American-British Laboratory Division 15 (ABL-15) located at Great Malvern. RCM operations were designed to deny the Germans effective utilization of radar and radio equipment.

The 36th BS's missions involved trickery, ingenious deception, spoofs, and tank communications jamming. The squadron flew on bad weather days during the Battle of the Bulge as well, when the rest of the Eighth Air Force stood down.

Along with these electronic warfare missions, the 36th BS also flew regular sorties which set out to discover the frequencies being used by the enemy for their radio and radar devices. For this they operated a number of Lockheed P-38 Lightning twin boomed fighters from Alconbury as well as their B-24s.