Administrative divisions of the Kingdom of Hungary

The following lists show the administrative divisions of the lands belonging to the Hungarian crown (1000 -1918) at selected points of time. The names are given in the main official language used in the Kingdom at the times in question.

For details on the functioning and development of the counties and some other administrative divisions see Counties of the Kingdom of Hungary. 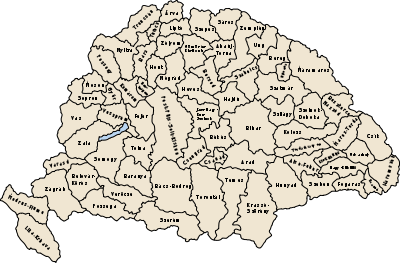 Map of the counties in the Kingdom of Hungary around 1880

This article does not show all states of administrative divisions that existed throughout the centuries, only the major ones. Especially for the medieval period, various sources often give slightly different divisions. Also, the lists of the individual points of time stem from different sources so that the first-level categorization is not necessarily compatible over time.

It is also important to bear in mind that it is more correct to translate the Hungarian counties as "comitatuses", because they were completely different from territories of British counts or German Graf.

Around 1074, the whole Kingdom of Hungary consisted of some 45-50 counties. The existence of many of them is disputed for this time period.

The following castles are assumed to have been seats of frontier counties (marchiae, határispánságok), it is probable that other castles were such seats as well (ordered from the north to the south):

In the 16th century, the Kingdom was so gravely impacted by Ottoman conquest that its territory was reduced to almost a third of its previous size. By 1541, the remaining part was renamed Royal Hungary and ruled by the Habsburgs.

See also: Captaincies of the Kingdom of Hungary 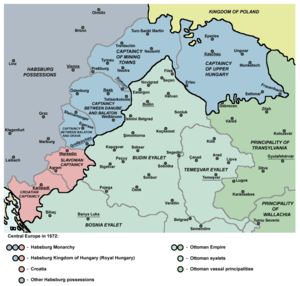 Map of captaincies of Royal Hungary in 1572

Later on, these captaincies were further subdivided.

In 1553 and 1578, southern and southeastern regions were split off into the Military Frontier and were de facto no longer part of the Kingdom.

Also, after 1606 there were the following captaincies-general:

Note that many of the counties ceased to exist during the Turkish occupation (app. 1541 – 1699/1718). For administrative divisions on the Turkish territory see Ottoman Empire.

After the defeat of the Turks (around 1700) there were some 70 counties in the whole Kingdom of Hungary again. After the final defeat of the Turks in 1718, the three southern counties Temesiensis, Torontaliensis and Krassovinsis created the special administrative district Banatus Temesiensis (Hungarian: Temesi Bánság). This district was dissolved again in 1779, but its southernmost part remained part of the Military Frontier (Confiniaria militaria) till the late 19th century.

The following list does not show Transylvania. The "districtus" is only a traditional formal division. Note that some of the previous counties, e. g. the Zarandiensis, were part of Transylvania at this time.

(e) Counties between the Drava and Sava (after the defeat of the Turks around 1700, they were considered part of Croatia-Slavonia):

These were privileged territories, which were totally exempt from the county system.

Their number was changing

The Kingdom of Hungary, including Croatia and Slavonia, was divided into 10 military/administrative districts: 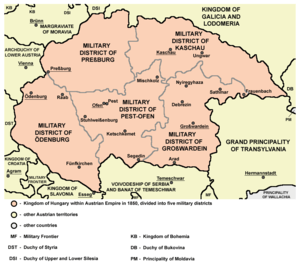 Map of the Kingdom of Hungary in 1850, showing the five military districts

These Districts were divided into counties, whose traditional territories however were modified in 1850 and 1853.

In October 1860, the Districts were abolished and the pre-1848 counties were restored.

Since 1867 the administrative and political divisions of the lands belonging to the Hungarian crown (Kingdom of Hungary) have been in great measure remodelled. In 1868 Transylvania was definitely reunited to Hungary proper, and the town and district of Fiume (Rijeka) declared autonomous. In 1873 part of the Military Frontier was united with Hungary proper and part with Croatia-Slavonia. Hungary proper, according to ancient usage, was generally divided into four great divisions or circles, and Transylvania up to 1876 was regarded as the fifth.

In 1876 a general system of counties was introduced. According to this division Hungary proper was divided into seven statistical regions having no administrative functions, of which Transylvania formed one.

The following administrative divisions existed between 1886 and 1918:

In the following, the key in the brackets gives the capital towns around 1910 first (note however that the capitals were usually changing throughout the centuries) and then the abbreviation for the country in which the territory is situated today:

The Kingdom of Hungary was divided into the following 71 counties:

(a) On the left bank of the Danube:

(b) On the right bank of the Danube:

(c) Between the Danube and Tisza:

(d) On the right bank of the Tisza:

(e) On the left bank of the Tisza:

(f) Between the Tisza and the Maros:

(g) Királyhágón túl (i.e. "over the royal pass through the mountains", roughly equal to Transylvania, all in present-day Romania):

Kingdom of Croatia and Slavonia

Kingdom of Croatia and Slavonia was divided into eight counties (all, except for most of Syrmia, in present-day Croatia):

Hungary proper had twenty-six urban counties or towns with municipal rights. These were:

In Croatia-Slavonia there were four urban counties or towns with municipal rights namely:

The town and district of Fiume (Rijeka) formed a separate division. It was a subject of dispute between Hungary proper and Croatia-Slavonia and changed hands several times (its desirability as a seaport caused it to change hands even after the Hungarian-Croatian union eventually broke up).