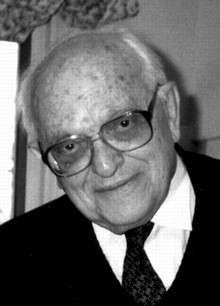 Anatol Rapoport (Russian: Анато́лий Бори́сович Рапопо́рт; May 22, 1911 – January 20, 2007) was a Russian-born American mathematical psychologist. He contributed to general systems theory, mathematical biology and to the mathematical modeling of social interaction and stochastic models of contagion.

Rapoport was born in Lozova, Kharkov Governorate, Russia (in today's Kharkiv Oblast, Ukraine) into a secular Jewish family.[1] In 1922, he came to the United States, and in 1928 he became a naturalized citizen. He started studying music in Chicago and continued with piano, conducting and composition at the Vienna Hochschule für Musik where he studied from 1929 to 1934. However, due to the rise of Nazism, he found it impossible to make a career as a pianist.[2]

He shifted his career into mathematics, getting a Ph.D. degree in mathematics under Otto Schilling and Abraham Adrian Albert at the University of Chicago in 1941 on the thesis Construction of Non-Abelian Fields with Prescribed Arithmetic.[3] According to the Toronto Globe and Mail, he was a member of the American Communist Party for three years, but quit before enlisting in the U.S. Army Air Corps in 1941, serving in Alaska and India during World War II.[4]

After the war, he joined the Committee on Mathematical Biology at the University of Chicago (1947–54), publishing his first book, Science and the Goals of Man, co-authored with semanticist S. I. Hayakawa in 1950. He also received a one-year fellowship at the prestigious Center for Advanced Study in the Behavioral Sciences in Stanford, California.

University of Toronto appointed him professor of peace studies in 1984, a position he held until 1996, but continued to teach until 2000.[5]

In 1984 he co-founded Science for Peace, was elected president and remained on its executive until 1998.[5]

Anatol Rapoport died of pneumonia in Toronto. He is survived by his wife Gwen, daughter Anya, and sons Alexander and Anthony.

Rapoport contributed to general systems theory, mathematical biology, and to the mathematical modeling of social interaction and stochastic models of contagion. He combined his mathematical expertise with psychological insights into the study of game theory, social networks, and semantics.

Rapoport extended these understandings into studies of psychological conflict, dealing with nuclear disarmament and international politics. His autobiography, Certainties and Doubts: A Philosophy of Life, was published in 2001.

Rapoport had a versatile mind, working in mathematics, psychology, biology, game theory, social network analysis, and peace and conflict studies. For example, he pioneered in the modeling of parasitism and symbiosis, researching cybernetic theory. This went on to give a conceptual basis for his lifelong work in conflict and cooperation.

Among many other well-known books on fights, games, violence, and peace, Rapoport was the author of over 300 articles and of "Two-Person Game Theory" (1966) and "N-Person Game Theory" (1970). He analyzed contests in which there are more than two sets of conflicting interests, such as war, diplomacy, poker, or bargaining. His work led him to peace research, including books on The Origins of Violence (1989) and Peace, An Idea Whose Time Has Come (1993).

He won a computer tournament in the 1980s, based on Robert Axelrod's The Evolution of Cooperation, which sought to understand how cooperation could emerge through evolution. The contenders had to present pieces of software that would play iterated games of the prisoner's dilemma against each other. Rapoport's entry, Tit-For-Tat has only four lines of code. The program opens by cooperating with its opponent. It then plays exactly as the other side played in the previous game. If the other side defected in the previous game, the program also defects; but only for one game. If the other side cooperates, the program continues to cooperate. According to Peace Magazine author/editor Metta Spencer, the program "punished the other player for selfish behaviour and rewarded her for cooperative behaviour—but the punishment lasted only as long as the selfish behaviour lasted. This proved to be an exceptionally effective sanction, quickly showing the other side the advantages of cooperating. It also set moral philosophers to proposing this as a workable principle to use in real life interactions".

His children report that he was a strong chess player but a bad poker player because he non-verbally revealed the strength of his hands.[4]

Anatol Rapoport was an early developer of social network analysis. His original work showed that one can measure large networks by profiling traces of flows through them. This enables learning about the speed of the distribution of resources, including information, and what speeds or impedes these flows—such as race, gender, socioeconomic status, proximity, and kinship.[6] This work linked social networks to the diffusion of innovation, and by extension, to epidemiology. Rapoport's empirical work traced the spread of information within a school. It prefigured the study of six degrees of separation, by showing the rapid spread of information in a population to almost all—but not all—school members (see references below).

According to Thomas Homer-Dixon in the Toronto Globe and Mail, Rapoport "became anti-militarist quite soon after the war. The idea of military values became anathema". He was a leading organizer of the first teach-ins against the Vietnam War at the University of Michigan, a model that spread rapidly throughout North America. He told at a teach-in: "By undertaking the war against Vietnam, the United States has undertaken a war against humanity...This war we shall not win". (Ann Arbor News, April 1967). He said he was an abolitionist, rather than a total pacifist: "I'm for killing the institution of war". In 1968, he signed the “Writers and Editors War Tax Protest” pledge, vowing to refuse tax payments in protest against the Vietnam War.[7]

Rapoport returned to the University of Toronto to become the founding (and unpaid) Professor of Peace and Conflict Studies programme, working with George Ignatieff and Canada's Science for Peace organization. As its sole professor at the start, he used a rigorous, interdisciplinary approach to the study of peace, integrating mathematics, politics, psychology, philosophy, science, and sociology. His main concern was to legitimize peace studies as a worthy academic pursuit. The Trudeau Centre for Peace and Conflict Studies continued to flourish at the University of Toronto under the leadership of Thomas Homer-Dixon, and, from 2008, under Ron Levi. When Rapoport began, there was one (unpaid) professor and twelve students. Now, there are three (paid) professors and ninety students.[8]

Rapoport's students report that he was an engaged and inspiring professor who captured their attention, imagination and interest with his wide-ranging knowledge, passion for the subject, good humor, kind and generous spirit, attentiveness to student concerns, and animated teaching style.[9]

In 1980, his famous tit for tat strategy for the iterated prisoner's dilemma tournament held by Robert Axelrod was published and in 1981 Rapoport co-founded the international non-governmental organization Science for Peace. He was recognized in the 1980s for his contribution to world peace through nuclear conflict restraint via his game theoretic models of psychological conflict resolution. He won the Lenz International Peace Research Prize in 1976. Professor Rapoport was also a member of the editorial board of the International Scholarly Journal of Environmental Peace published by the International Innovation Projects at the University of Toronto edited by Biswajit (Bob) Ganguly and Roger I. C. Hansell.

Rapoport's books and articles include: