This article discusses the application of mathematical models to capture emergent properties of complex physical systems. For other scientific and professional disciplines addressing complexity in their fields, see complex systems.

A complex system is a system that exhibits some (and possibly all) of the following characteristics:[1]

A complex system can be also viewed as a system composed of many components which may interact with each other. In many cases it is useful to represent such a system as a network where the nodes represent the components and the links their interactions.

In the area of mathematics, arguably the largest contribution to the study of complex systems was the discovery of chaos in deterministic systems, a feature of certain dynamical systems that is strongly related to nonlinearity.[4] The study of neural networks was also integral in advancing the mathematics needed to study complex systems.

The notion of self-organizing systems is tied up to work in nonequilibrium thermodynamics, including that pioneered by chemist and Nobel laureate Ilya Prigogine in his study of dissipative structures. Even older is the work by Hartree-Fock c.s. on the quantum-chemistry equations and later calculations of the structure of molecules which can be regarded as one of the earliest examples of emergence and emergent wholes in science.

For a dynamical system to be classified as chaotic, it must have the following properties:[8] 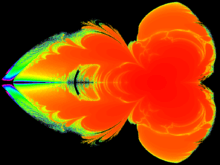 Assign z to z2 minus the conjugate of z, plus the original value of the pixel for each pixel, colouring pixels per the number iterations until the absolute value of z exceeds two; display using inversion (borders are inner set), so that you can see that it threatens to fail the density condition, even if it meets the topological condition.

Complex adaptive systems (CAS) are special cases of complex systems. They are complex in that they are diverse and made up of multiple interconnected elements and adaptive in that they have the capacity to change and learn from experience. Examples of complex adaptive systems include the stock market, social insect and ant colonies, the biosphere and the ecosystem, the brain and the immune system, the cell and the developing embryo, manufacturing businesses and any human social group-based endeavor in a cultural and social system such as political parties or communities. This includes some large-scale online systems, such as collaborative tagging or social bookmarking systems.

Complex systems may have the following features:[9]

Cascading failures
Due to the strong coupling between components in complex systems, a failure in one or more components can lead to cascading failures which may have catastrophic consequences on the functioning of the system.[10]

Complex systems may be open
Complex systems are usually open systems — that is, they exist in a thermodynamic gradient and dissipate energy. In other words, complex systems are frequently far from energetic equilibrium: but despite this flux, there may be pattern stability, see synergetics.

Dynamic network of multiplicity
As well as coupling rules, the dynamic network of a complex system is important. Small-world or scale-free networks[11][12][13] which have many local interactions and a smaller number of inter-area connections are often employed. Natural complex systems often exhibit such topologies. In the human cortex for example, we see dense local connectivity and a few very long axon projections between regions inside the cortex and to other brain regions.Recovery and failures of complex systems. A complex system can evolve into spontaneous recovery and failure and have hysteresis behavior.[14]

May produce emergent phenomena
Complex systems may exhibit behaviors that are emergent, which is to say that while the results may be sufficiently determined by the activity of the systems' basic constituents, they may have properties that can only be studied at a higher level. For example, the termites in a mound have physiology, biochemistry and biological development that are at one level of analysis, but their social behavior and mound building is a property that emerges from the collection of termites and needs to be analysed at a different level.

Relationships are non-linear
In practical terms, this means a small perturbation may cause a large effect (see butterfly effect), a proportional effect, or even no effect at all. In linear systems, effect is always directly proportional to cause. See nonlinearity.

Relationships contain feedback loops
Both negative (damping) and positive (amplifying) feedback are always found in complex systems. The effects of an element's behaviour are fed back to in such a way that the element itself is altered.