A complex adaptive system is a "complex macroscopic collection" of relatively "similar and partially connected micro-structures" formed in order to adapt to the changing environment and increase its survivability as a macro-structure.[1][2][3]

The term complex adaptive systems, or complexity science, is often used to describe the loosely organized academic field that has grown up around the study of such systems. Complexity science is not a single theory—it encompasses more than one theoretical framework and is highly interdisciplinary, seeking the answers to some fundamental questions about living, adaptable, changeable systems.

Typical examples of complex adaptive systems include: the global macroeconomic network within a country or group of countries; stock market and complex web of cross border holding companies; social insect (e.g. ant) colonies;[4] the biosphere and the ecosystem; the brain and the immune system; the cell and the developing embryo; manufacturing businesses; and any human social group-based endeavour in a particular ideology and social system such as political parties, communities, geopolitical organisations, war, and terrorist networks of both hierarchical and leaderless nature.[4][5][6] The internet and cyberspace—composed, collaborated, and managed by a complex mix of human–computer interactions, is also regarded as a complex adaptive system.[7][8][9]

The fields of CAS and artificial life are closely related. In both areas the principles of emergence and self-organization are very important. The ideas and models of CAS are essentially evolutionary, grounded in modern chemistry, biological views on adaptation, exaptation and evolution and simulation models[10] in economics and social systems.

The study of CAS focuses on complex, emergent and macroscopic properties of the system.[3][11][12] John H. Holland said that CAS "are systems that have a large numbers of components, often called agents, that interact and adapt or learn."[13]

What distinguishes a CAS from a pure multi-agent system (MAS) is the focus on top-level properties and features like self-similarity, complexity, emergence and self-organization. A MAS is defined as a system composed of multiple interacting agents; whereas in CAS, the agents as well as the system are adaptive and the system is self-similar. A CAS is a complex, self-similar collectivity of interacting, adaptive agents. Complex Adaptive Systems are characterised by a high degree of adaptive capacity, giving them resilience in the face of perturbation.

Other important properties are adaptation (or homeostasis), communication, cooperation, specialization, spatial and temporal organization, and reproduction. They can be found on all levels: cells specialize, adapt and reproduce themselves just like larger organisms do. Communication and cooperation take place on all levels, from the agent to the system level. The forces driving co-operation between agents in such a system, in some cases, can be analysed with game theory.

Some of the most important characteristics of complex systems are:[14]

Cultural agency theory (CAT) is a cybernetic living systems paradigm intending to model complex adaptive systems focusing also on the social and cultural dimesions.[20] It differs from CAS that is devoid of any substantive cybernetic reflections. Indeed, CAT provides a modelling approach to explore predefined contexts and can be adapted to reflect those contexts. If the modelling approach does not involve social and culture dimensions, it is called autonomous agency theory (AAT). 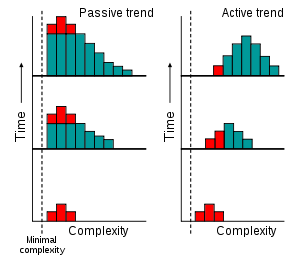 Passive versus active trends in the evolution of complexity. CAS at the beginning of the processes are colored red. Changes in the number of systems are shown by the height of the bars, with each set of graphs moving up in a time series.
Main article: Evolution of biological complexity

Living organisms are complex adaptive systems. Although complexity is hard to quantify in biology, evolution has produced some remarkably complex organisms.[21] This observation has led to the common misconception of evolution being progressive and leading towards what are viewed as "higher organisms".[22]

If this were generally true, evolution would possess an active trend towards complexity. As shown below, in this type of process the value of the most common amount of complexity would increase over time.[23] Indeed, some artificial life simulations have suggested that the generation of CAS is an inescapable feature of evolution.[24][25]

However, the idea of a general trend towards complexity in evolution can also be explained through a passive process.[23] This involves an increase in variance but the most common value, the mode, does not change. Thus, the maximum level of complexity increases over time, but only as an indirect product of there being more organisms in total. This type of random process is also called a bounded random walk.

In this hypothesis, the apparent trend towards more complex organisms is an illusion resulting from concentrating on the small number of large, very complex organisms that inhabit the right-hand tail of the complexity distribution and ignoring simpler and much more common organisms. This passive model emphasizes that the overwhelming majority of species are microscopic prokaryotes,[26] which comprise about half the world's biomass[27] and constitute the vast majority of Earth's biodiversity.[28] Therefore, simple life remains dominant on Earth, and complex life appears more diverse only because of sampling bias.