A star system of two stars is known as a binary star, binary star system or physical double star. If there are no tidal effects, no perturbation from other forces, and no transfer of mass from one star to the other, such a system is stable, and both stars will trace out an elliptical orbit around the center of mass of the system indefinitely. (See Two-body problem). Examples of binary systems are Sirius, Procyon and Cygnus X-1, the last of which probably consists of a star and a black hole.

A multiple star system consists of three or more stars that appear from Earth to be close to one another in the sky. This may result from the stars actually being physically close and gravitationally bound to each other, in which case it is a physical multiple star, or this closeness may be merely apparent, in which case it is an optical multiple star (meaning that the stars may appear to be close to each other when viewed from planet Earth, as they both seem to occupy the same point in the sky, but in reality, one star may be much further away from Earth than the other, which is not readily apparent unless one can view them from a different angle). Physical multiple stars are also commonly called multiple stars or multiple star systems.[2][3][4][5][6]

Most multiple star systems are triple stars. Systems with four or more components are less likely to occur.[5] Multiple-star systems are called triple, trinary or ternary if they contain three stars; quadruple or quaternary if they contain four stars; quintuple or quintenary with five stars; sextuple or sextenary with six stars; septuple or septenary with seven stars. These systems are smaller than open star clusters, which have more complex dynamics and typically have from 100 to 1,000 stars.[7] Most multiple star systems known are triple; for higher multiplicities, the number of known systems with a given multiplicity decreases exponentially with multiplicity.[8] For example, in the 1999 revision of Tokovinin's catalog[3] of physical multiple stars, 551 out of the 728 systems described are triple. However, because of selection effects, knowledge of these statistics is very incomplete.[9]

Multiple-star systems can be divided into two main dynamical classes: hierarchical systems which are stable and consist of nested orbits that don't interact much and so each level of the hierarchy can be treated as a Two-body problem, or the trapezia which have unstable strongly interacting orbits and are modelled as an n-body problem, exhibiting chaotic behavior.[10] 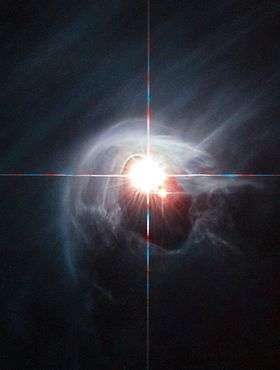 Star system named DI Cha. While only two stars are apparent, it is actually a quadruple system containing two sets of binary stars.[11]

Most multiple-star systems are organized in what is called a hierarchical system: the stars in the system can be divided into two smaller groups, each of which traverses a larger orbit around the system's center of mass. Each of these smaller groups must also be hierarchical, which means that they must be divided into smaller subgroups which themselves are hierarchical, and so on.[12] Each level of the hierarchy can be treated as a two-body problem by considering close pairs as if they were a single star. In these systems there is little interaction between the orbits and the stars' motion will continue to approximate stable[5][13] Keplerian orbits around the system's center of mass,[14] unlike the unstable trapezia systems or the even more complex dynamics of the large number of stars in star clusters and galaxies.

In a physical triple star system, each star orbits the center of mass of the system. Usually, two of the stars form a close binary system, and the third orbits this pair at a distance much larger than that of the binary orbit. This arrangement is called hierarchical.[15][16] The reason for this is that if the inner and outer orbits are comparable in size, the system may become dynamically unstable, leading to a star being ejected from the system.[17] Triple stars that are not all gravitationally bound might comprise a physical binary and an optical companion, such as Beta Cephei, or rarely, a purely optical triple star, such as Gamma Serpentis. 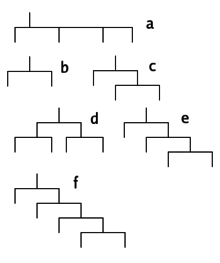 Hierarchical multiple star systems with more than three stars can produce a number of more complicated arrangements, which can be illustrated by what Evans (1968) has called a mobile diagram. These are similar to ornamental mobiles hung from the ceiling. Some examples can be seen in the figure to the right. Each level of the diagram illustrates the decomposition of the system into two or more systems with smaller size. Evans calls a diagram multiplex if there is a node with more than two children, i.e. if the decomposition of some subsystem involves two or more orbits with comparable size. Because, as we have already seen for triple stars, this may be unstable, multiple stars are expected to be simplex, meaning that at each level there are exactly two children. Evans calls the number of levels in the diagram its hierarchy.[18]

Trapezia are usually very young, unstable systems. These are thought to form in stellar nurseries, and quickly fragment into stable multiple stars, which in the process may eject components as galactic high-velocity stars.[28][29] They are named after the multiple star system known as the Trapezium Cluster in the heart of the Orion Nebula.[28] Such systems are not rare, and commonly appear close to or within bright nebulae. These stars have no standard hierarchical arrangements, but compete for stable orbits, where the center of gravity is not fixed at some point but moves as the stars change their mutual positions. This relationship is called interplay.[30] Such stars eventually settle down to a close binary with a distant companion, with the other star(s) previously in the system ejected into interstellar space at high velocities.[30] Example of such events may explain the runaway stars that might have been ejected during a collision of two binary star groups or a multiple system. This event is credited with ejecting AE Aurigae, Mu Columbae and 53 Arietis at above 200 km·s−1 and has been traced to the Trapezium cluster in the Orion Nebula some two million years ago.[31][32]

The components of multiple stars can be specified by appending the suffixes A, B, C, etc., to the system's designation. Suffixes such as AB may be used to denote the pair consisting of A and B. The sequence of letters B, C, etc. may be assigned in order of separation from the component A.[33][34] Components discovered close to an already known component may be assigned suffixes such as Aa, Ba, and so forth.[34]

Nomenclature in the Multiple Star Catalogue 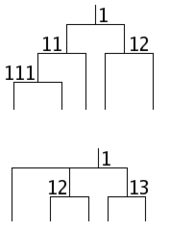 A. A. Tokovinin's Multiple Star Catalogue uses a system in which each subsystem in a mobile diagram is encoded by a sequence of digits. In the mobile diagram (d) above, for example, the widest system would be given the number 1, while the subsystem containing its primary component would be numbered 11 and the subsystem containing its secondary component would be numbered 12. Subsystems which would appear below this in the mobile diagram will be given numbers with three, four, or more digits. When describing a non-hierarchical system by this method, the same subsystem number will be used more than once; for example, a system with three visual components, A, B, and C, no two of which can be grouped into a subsystem, would have two subsystems numbered 1 denoting the two binaries AB and AC. In this case, if B and C were subsequently resolved into binaries, they would be given the subsystem numbers 12 and 13.[35]

For a designation system, identifying the hierarchy within the system has the advantage that it makes identifying subsystems and computing their properties easier. However, it causes problems when new components are discovered at a level above or intermediate to the existing hierarchy. In this case, part of the hierarchy will shift inwards. Components which are found to be nonexistent, or are later reassigned to a different subsystem, also cause problems.[39][40]

During the 24th General Assembly of the International Astronomical Union in 2000, the WMC scheme was endorsed and it was resolved by Commissions 5, 8, 26, 42, and 45 that it should be expanded into a usable uniform designation scheme.[36] A sample of a catalog using the WMC scheme, covering half an hour of right ascension, was later prepared.[41] The issue was discussed again at the 25th General Assembly in 2003, and it was again resolved by commissions 5, 8, 26, 42, and 45, as well as the Working Group on Interferometry, that the WMC scheme should be expanded and further developed.[42] 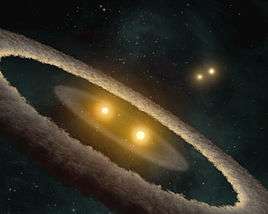 HD 98800 is a quadruple star system located in the TW Hydrae association.