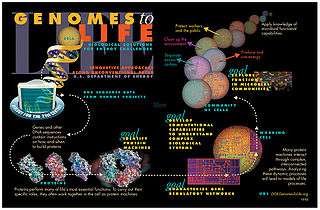 An illustration of the systems approach to biology

Systems biology is the computational and mathematical modeling of complex biological systems. An emerging engineering approach applied to biological scientific research, systems biology is a biology-based inter-disciplinary field of study that focuses on complex interactions within biological systems, using a holistic approach (holism instead of the more traditional reductionism) to biological research. Particularly from year 2000 onwards, the concept has been used widely in the biosciences in a variety of contexts. For example, the Human Genome Project is an example of applied systems thinking in biology which has led to new, collaborative ways of working on problems in the biological field of genetics.[1] One of the outreaching aims of systems biology is to model and discover emergent properties, properties of cells, tissues and organisms functioning as a system whose theoretical description is only possible using techniques which fall under the remit of systems biology.[2] These typically involve metabolic networks or cell signaling networks.[3]

Systems biology can be considered from a number of different aspects:

"The reductionist approach has successfully identified most of the components and many of the interactions but, unfortunately, offers no convincing concepts or methods to understand how system properties emerge...the pluralism of causes and effects in biological networks is better addressed by observing, through quantitative measures, multiple components simultaneously and by rigorous data integration with mathematical models" (Sauer et al.).[7]

"Systems biology...is about putting together rather than taking apart, integration rather than reduction. It requires that we develop ways of thinking about integration that are as rigorous as our reductionist programmes, but different....It means changing our philosophy, in the full sense of the term" (Denis Noble).[6]

This variety of viewpoints is illustrative of the fact that systems biology refers to a cluster of peripherally overlapping concepts rather than a single well-delineated field. However the term has widespread currency and popularity as of 2007, with chairs and institutes of systems biology proliferating worldwide.

Systems biology finds its roots in:

One of the theorists who can be seen as one of the precursors of systems biology is Ludwig von Bertalanffy with his general systems theory.[12] One of the first numerical simulations in cell biology was published in 1952 by the British neurophysiologists and Nobel prize winners Alan Lloyd Hodgkin and Andrew Fielding Huxley, who constructed a mathematical model that explained the action potential propagating along the axon of a neuronal cell.[13] Their model described a cellular function emerging from the interaction between two different molecular components, a potassium and a sodium channel, and can therefore be seen as the beginning of computational systems biology.[14] Also in 1952, Alan Turing published The Chemical Basis of Morphogenesis, describing how non-uniformity could arise in an initially homogeneous biological system.[15]

In 1960, Denis Noble developed the first computer model of the heart pacemaker.[16]

The formal study of systems biology, as a distinct discipline, was launched by systems theorist Mihajlo Mesarovic in 1966 with an international symposium at the Case Institute of Technology in Cleveland, Ohio, entitled "Systems Theory and Biology".[17][18]

The 1960s and 1970s saw the development of several approaches to study complex molecular systems, such as the metabolic control analysis and the biochemical systems theory. The successes of molecular biology throughout the 1980s, coupled with a skepticism toward theoretical biology, that then promised more than it achieved, caused the quantitative modelling of biological processes to become a somewhat minor field.[19]

However the birth of functional genomics in the 1990s meant that large quantities of high quality data became available, while the computing power exploded, making more realistic models possible. In 1992, then 1994, serial articles [20][21][22][23][24] on systems medicine, systems genetics and systems biological engineering by B. J. Zeng were published in China, and was giving a lecture on biosystems theory and systems approach research at the First International Conference on Transgenic Animals, Beijing, 1996. In 1997, the group of Masaru Tomita published the first quantitative model of the metabolism of a whole (hypothetical) cell.[25]

Around the year 2000, after Institutes of Systems Biology were established in Seattle and Tokyo, systems biology emerged as a movement in its own right, spurred on by the completion of various genome projects, the large increase in data from the omics (e.g., genomics and proteomics) and the accompanying advances in high-throughput experiments and bioinformatics.

An important milestone in the development of systems biology has become the international project Physiome. 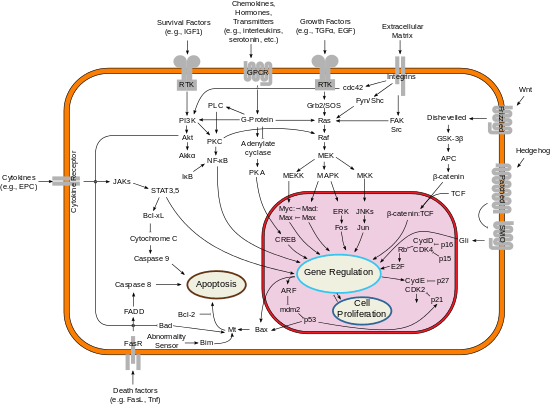 According to the interpretation of Systems Biology as the ability to obtain, integrate and analyze complex data sets from multiple experimental sources using interdisciplinary tools, some typical technology platforms are:

Organismal variation in phenotype as it changes during its life span.

In addition to the identification and quantification of the above given molecules further techniques analyze the dynamics and interactions within a cell. This includes:

Systems analysis of the biome.

Analysis of the system of sign relations of an organism or other biosystem.

A systematic study of physiome in biology.

Cancer Systems Biology is an example of the systems biology approach, which can be distinguished by the specific object of study (tumorigenesis and treatment of cancer). It works with the specific data (patient samples, high-throughput data with particular attention to characterizing cancer genome in patient tumour samples) and tools (immortalized cancer cell lines, mouse models of tumorigenesis, xenograft models, Next Generation Sequencing methods, siRNA-based gene knocking down screenings, computational modeling of the consequences of somatic mutations and genome instability).[33] The long-term objective of the systems biology of cancer is ability to better diagnose cancer, classify it and better predict the outcome of a suggested treatment, which is a basis for personalized cancer medicine and virtual cancer patient in more distant prospective. Significant efforts in Computational systems Biology of Cancer have been made in creating realistic multi-scale in silico models of various tumours.[34]

The investigations are frequently combined with large-scale perturbation methods, including gene-based (RNAi, mis-expression of wild type and mutant genes) and chemical approaches using small molecule libraries. Robots and automated sensors enable such large-scale experimentation and data acquisition. These technologies are still emerging and many face problems that the larger the quantity of data produced, the lower the quality. A wide variety of quantitative scientists (computational biologists, statisticians, mathematicians, computer scientists, engineers, and physicists) are working to improve the quality of these approaches and to create, refine, and retest the models to accurately reflect observations.

The systems biology approach often involves the development of mechanistic models, such as the reconstruction of dynamic systems from the quantitative properties of their elementary building blocks.[35][36][37] For instance, a cellular network can be modelled mathematically using methods coming from chemical kinetics and control theory. Due to the large number of parameters, variables and constraints in cellular networks, numerical and computational techniques are often used (e.g., flux balance analysis).[37]

Other aspects of computer science, informatics, statistics are also used in systems biology. These include: