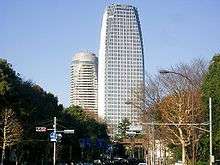 Located in the Atago district, Mount Atago is the highest natural mountain in the 23 special wards of Tokyo, with an elevation of 25.7 m. The Atago Shrine (愛宕神社, Atago Jinja) is housed on the mountain.

This article is issued from Wikipedia - version of the 9/2/2015. The text is available under the Creative Commons Attribution/Share Alike but additional terms may apply for the media files.