The name Azabu literally means hemp cloth. Until the early Edo period, the area was agricultural. Archaeological evidence indicates that the area was inhabited as far back as the Jōmon period. The Juban Inari shrine (formerly known as Takechiyo Inari) was constructed in AD 712, the temple of Zenpuku-ji in 824, and the Hikawa Shrine in 939 (on orders of Minamoto no Tsunemoto).

The area became urbanized in the 17th century, after Tokugawa Ieyasu established his seat of government in nearby Edo. Azabu soon became home to the Juban Horse Grounds, Edo's largest horse market. In 1859, the first United States delegation in Japan was established at Zenpuku-ji.

Azabu (including the adjacent district of Roppongi) was a ward of Tokyo from 1878 to 1947. During the industrialization of the Meiji era, Azabu was connected to Tokyo by horse-drawn trams. The lowlands became light commercial areas, while the hilltops became prime residential areas. Later, during the Taishō period, Azabu was overrun with theaters, department stores, and red-light districts, becoming one of Japan's best-known entertainment districts.

Much of Azabu was destroyed during the firebombing of Tokyo in 1945, although a special bunker created for the privileged classes that lived there saved many lives, including Yoko Ono's.[1] Azabu's commercial areas were not revived after the war, and the area is mainly a residential district today. Following the merger of Azabu Ward into Minato Ward in 1947, the Azabu ward office located in Roppongi was converted into a branch office of the Minato ward government.

This is the district of Tokyo where manga artist Naoko Takeuchi resides, and the Azabu-Jūban area is the setting of her fictional Sailor Moon series. The internationally acclaimed vocalist Ayumi Hamasaki resides in a penthouse apartment in Minami-Azabu. Azabu is also the location of many international embassies and consulates, as well as a large "gaijin" (foreign) population. Azabu-Jūban, with its unique cobbled high-street, also hosts the popular annual Azabu-Jūban Matsuri, a food festival with a variety of local vendor stalls and carnival games which attract large crowds every summer. 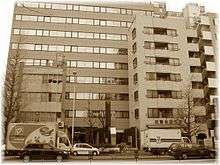 Companies based in Azabu

Azabu High School, a private boys school, is in Azabu.

Ohana International School in Tokyo, a small preschool in the centre of Azabu-Jūban.

The Azabu Library exists in Azabu.[2]