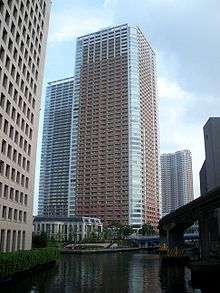 Shibaura (芝浦) is a district of Minato ward located in Tokyo, Japan. The district is located between the eastern side of the Yamanote Line train and Tokyo Bay. Shibaura consists mostly of artificial islands created by the excavation of industrial canals in the early 20th century. Formerly a light industrial area, it became famous for its night life during the Japanese asset price bubble period and, since the early 2000s, has become a high-rise residential district.

Shibaura is the home to a number of major Japanese corporations including:

The Japan Times has its headquarters in the Japan Times Nifco Building (ジャパンタイムズ・ニフコビル, Japan Taimuzu Nifuko Biru) in Shibaura.[5][6]

The district is served by Tamachi Station on the Yamanote and Keihin-Tōhoku Lines, and by Shibaura-futō Station of the Yurikamome line. The Yokosuka Line also runs in a tunnel below the district, although there are no stops in the area.

The Tokyo Expressway system passes through the area, and the central Tokyo side of the Rainbow Bridge terminates there.