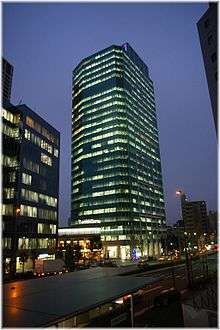 Shirokane (白金) is a district of Minato, Tokyo, Japan. Currently it consists of six chōme. According to Minato, as of November 1, 2007, the population in the neighborhood is 14,840. The postal code is 108-0072. The term Shirokane narrowly refers to Shirokane 1-chōme to Shirokane 6-chōme, but is sometimes used to include the larger neighborhood formerly known as Shiba-Shirokane (芝白金), which encompasses part of Shirokanedai and Takanawa as well as Shirokane. This article deals with the place in the narrow definition.

Located at the southern end of Minato, Tokyo, Shirokane has boundaries with the neighborhoods of Minami-Azabu, Shirokanedai, Takanawa and Ebisu. The Prefectural Highway 305 (Ebisu-dori) divides into odd-numbered (1, 3, 5-chōmes) and even-numbered (2, 4, 6-chōmes) subdistricts designated as industrial and high-rise residential areas, respectively. Along Furukawa river, small factories and shopping streets are developed, and upon the southern hill, a quiet residential area is developed with apartments and schools such as Seishin Joshi Gakuin. The recent opening of a subway allowed the area centered at Shirokane-Takanawa Station to undergo a large redevelopment.

There are forest areas owned by academic institutions and private companies such as Seishin Joshi Gakuin and the Kitasato Institute. With the Institute for Nature Study and the Institute of Medical Science in Shirokanedai, these areas forms one of the largest green districts in the special wards of Tokyo. This large green area traces back to daimyo's mansions which existed in Edo period; later, industrialists made their residences in this place, which gave rise to the well-known upper-class neighborhood.

During the Ōei era (1394–1428), a government official of the Southern Dynasty（南朝）who settled here became wealthy. His nickname was Shirokane Chōja (白金長者), which means "man who possesses much white gold" (白金), a reference to platinum. Thus the name of this location is the "Platinum District".

Famous economist Kazuhide Uekusa lives in Shirokanedai with his family.