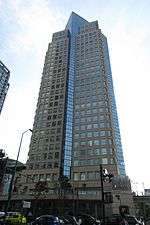 The bank was founded in 1920 as a regional bank to serve customers in Kanagawa Prefecture and southwestern Tokyo. It was formed in the wake of the collapse of several existing banks in the region, one of which (Dai-Ni Bank) began operations in 1869 as Yokohama Bank (横浜為替会社), the first modern financial institution in Japan; consequentially, Bank of Yokohama claims to have the longest history of any Japanese bank.[2]

In 2015, Bank of Yokohama announced a merger with the smaller Higashi-Nippon Bank to create Concordia Financial Group, the largest regional bank holding company in Japan.[3] Upon completion of this transaction in March 2016, Bank of Yokohama was de-listed, and Concordia took its place as a constituent of the Nikkei 225 stock market index.[4]