British occupation of the Faroe Islands

The British occupation of the Faroe Islands in World War II, also known as Operation Valentine, was implemented immediately following the German invasion of Denmark and Norway.

In April 1940, the United Kingdom occupied the strategically important Faroe Islands to preempt a German invasion. British troops left shortly after the end of the war.

At the time of the occupation, the Faroe Islands had the status of an amt (county) of Denmark. Following the invasion and occupation of Denmark on 9 April 1940, British forces launched "Operation Valentine" to occupy the Faroe Islands. On 11 April, Winston Churchill — then First Lord of the Admiralty — announced to the House of Commons that the Faroe Islands would be occupied:

We are also at this moment occupying the Faroe Islands, which belong to Denmark and which are a strategic point of high importance, and whose people showed every disposition to receive us with warm regard. We shall shield the Faroe Islands from all the severities of war and establish ourselves there conveniently by sea and air until the moment comes when they will be handed back to Denmark liberated from the foul thraldom into which they have been plunged by German aggression.

An announcement was broadcast by the BBC radio. An aircraft of the Royal Air Force (RAF) was seen over the Faroese capital Tórshavn on the same day.

On 12 April, two destroyers of the British Royal Navy arrived in Tórshavn harbour. Following a meeting with Carl Aage Hilbert (the Danish Prefect of the Islands) and Kristian Djurhuus (President of the Løgting, the Faroese Parliament), an emergency meeting of the Løgting was convened the same afternoon. Pro-independence members tried to declare the independence of the Faroe Islands from the Kingdom of Denmark but were outvoted. An official announcement was later made announcing the occupation and ordering a nighttime blackout in Tórshavn and neighbouring Argir, the censorship of post and telegraphy and the prohibition of the use of motor vehicles during the night without a permit.[1]

On 13 April, the Royal Navy cruiser HMS Suffolk arrived at Tórshavn. Colonel T B W Sandall (the British military commander) and Frederick Mason (the new British Consul to the Faroe Islands) then met with the Danish Prefect. The Prefect responded with what Sandall took to be a formal protest, although Hilbert maintained that owing to the occupation of Denmark he was unable to formally represent the Danish government. He duly accepted the British terms on the basis that the UK would not seek to interfere with the internal affairs of the islands. A formal protest was made by the Løgting, albeit expressing the wish for friendly relations. 250 Royal Marines were disembarked, later to be replaced by other British troops. In practice, cordial relations were maintained between the British forces and the Faroese authorities.

In May, the Royal Marines were replaced by soldiers of the Lovat Scouts, a Scottish Regiment. In 1942, they were replaced by the Cameronians (Scottish Rifles). From 1944, the British garrison was considerably reduced.

The author Eric Linklater was part of the British garrison. His 1956 novel The Dark of Summer was set in the Faroe Islands during the war years.

On 20 June 1940, five Swedish naval vessels arrived in the Faroe Islands.[2] Four were destroyers bought from Italy, one with civilian passengers; the fifth was a tanker converted to military status. Britain seized all the ships under armed threat, and moved them to the Shetland Islands. Although Sweden was a neutral country and not at war with Britain, the British feared Germany would seize them if they continued to Sweden. After political negotiations Sweden secured their return. The British Navy had stripped equipment and caused damage to the ships, which Britain later gave compensation for. The Swedish commander was criticized by other Swedish officers for conceding the ships without resistance.

A plaque has been erected by British veterans in Tórshavn Cathedral expressing thanks for the kindness shown to them by the Faroese people during their presence. Approximately 170 marriages took place between British soldiers and Faroese women. The British Consul, Frederick Mason (1913–2008) also married a local woman, Karen Rorholm.

The Faroe Islands suffered occasional attacks by German Luftwaffe aircraft in the course of the war, but a full-scale invasion was never attempted. Drifting sea mines proved to be a considerable problem and resulted in the loss of numerous fishing boats and their crews. The trawler Nýggjaberg was sunk on 28 March 1942 near Iceland; 21 Faroese seamen were killed in the worst single loss of Faroese lives in the war. During the war, Faroese ships had to hoist the Faroese flag and paint FAROES / FØROYAR on the ships' sides, thus allowing the Royal Navy to identify them as "friendly".

During the occupation, the Løgting was given full legislative powers, albeit as an expedient given the occupation of Denmark. Although Iceland became an independent republic in 1944, Churchill refused to countenance a change in the constitutional status of the Faroe Islands whilst Denmark was still occupied. Following the liberation of Denmark and the end of World War II in Europe, the occupation was terminated in May 1945 and the last British soldiers left in September. The experience of wartime self-government did, however, mean that a return to the pre-war status of an amt (county) was unrealistic and unpopular. A referendum on independence was held in 1946; subsequently formal autonomy was established in 1948 (albeit within the Danish realm).

The largest tangible sign of the British presence is the runway of Vágar Airport. Other reminders include the naval guns at the fortress of Skansin in Tórshavn, which served as the British military headquarters. A continuing reminder is the Faroese love of fish and chips, and British chocolate such as Dairy Milk (which is readily available in shops throughout the islands, but not in Denmark). American and German neuroepidemiologists (John F. Kurtzke,[4][5] Klaus Lauer,[6] Stuart Cook,[7] R.G.Cooke[8] and others) have researched possible health consequences of the British occupation on the Faroese population.

In 1990, the Faroese government organised British Week, a celebration of the 50th anniversary of the friendly occupation. The celebration was attended by HMS Brilliant and a Royal Marines band. Sir Frederick Mason, the former wartime British consul to the Faroes, was also present.[9] 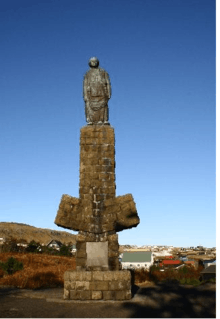 Minnisvarðin, in honour of the 210 men who died at sea during World War II. Erected in 1956, made by Kaare Orud (Norwegian artist), Lamhauge and Waagstein, Jacob Simonsen, the stoneplates were made by the Føroya Mekaniski Grótídnaður.

More than 200 Faroese seamen lost their lives at sea during World War II, most due to the war. A monument in their memory stands in Tórshavn's municipal park. Several Faroese vessels were either bombed, or sunk by German submarines or by drifting sea mines. Faroese fishing vessels harvested the sea near Iceland and around the Faroe Islands, and transported their catch to the UK for sale there.[10]

The only airfield on the Faroe Islands was built in 1942–43 on the island of Vágar by the Royal Engineers under the command of Lieutenant-Colonel William E. Law. The majority of the British personnel in the Faroes were stationed at Vágar, mostly working on the construction of the airfield. Abandoned after the war, it was reopened as the civilian Vágar Airport in 1963. Left-hand driving was in force on the roads of the island of Vágar until the British troops left the Faroe Islands.

The status of the Faroese flag 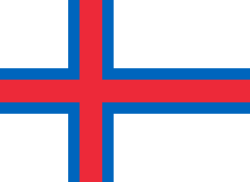 Following the occupation of Denmark by Germany, Faroese vessels were no longer permitted by the British Admiralty to fly the Danish flag. This was of considerable significance given the importance of the fishing fleet to the Faroese economy. Following some intensive discussions between the British occupation authorities, the Faroese authorities and the Danish Prefect, as well as discussions between the UK Foreign Office and the Danish Embassy in London, on 25 April 1940 the British authorities recognised the Faroese flag — Merkið — as the civil ensign of the Faroe Islands. The traditional Faroese coat of arms was, however, not reintroduced until the formal introduction of home rule on 23 March 1948.[11]