LGBT rights in the Faroe Islands

Lesbian, gay, bisexual, and transgender (LGBT) persons in the Faroe Islands may face legal challenges not experienced by non-LGBT residents. While same-sex sexual activity has been legal in the Faroe Islands since the thirties, same-sex couples and households headed by same-sex couples remain ineligible for some legal rights available to opposite-sex couples. However, after long having been a taboo subject, public opinion on homosexuality and transgender issues is becoming more liberal, and in April 2016 the Løgting passed legislation legalizing civil same-sex marriage on the Faroes as well as recognizing same-sex marriages established in Denmark and abroad. Yet to be ratified by the Folketing and obtaining royal assent.

Same-sex sexual activity has been legal in the Faroe Islands since 1933, when it was legalized in all parts of the Danish Realm. At that time, the age of consent was set at 18 for male same-sex relations. While Denmark (incl. the County of Greenland) lowered the age of consent to 15 in 1977, making it gender-neutral, the autonomous Faroe Islands did not change its law until 1988.[2]

Denmark legalised same-sex marriage in 2012 and Greenland's identical law took into effect on 1 April 2016, but similar attempt had been rejected in the Faroe Islands, until a law was finally passed in late April 2016.

An attempt to introduce Denmark's registered partnerships law in the Faroe Islands was considered in 2007, but it was never submitted to the Faroese parliament; whilst a same-sex marriage bill was rejected by the parliament in 2014, prior to the 2015 election. Following that election, a same-sex marriage bill was put to the parliament in September 2015. The proposed bill included civil marriage and full adoption rights for same-sex couples in line with the laws of Denmark and Greenland.

The bill was tabled again for the continued second reading on 26th April, 2016.[5] After a very long meeting which started at 11 in the morning on 26 April and ended after midnight, the Løgting voted at 00:30 on 27 April. Heðin Mortensen withdrew a proposal about a referendum, which he had proposed earlier. It had caused a government crises. Mortensen asked for a short break, so that he could discuss the matter with his party and the other coalition parties. After one and a half hours break he withdraw his proposal.

Just after this the parliamnt voted yes to the proposal in the second reading to implement the Danish marriage law with 19 votes for and 14 against. The members of the coalition and Sonja Jógvansdóttir and two members of the opposition: Magni Laksáfoss and Edmund Joensen from the Union Party voted yes.[6]

The third reading of the bill was held on 29 April 2016. Opponents of the law advanced a repeated proposal that the law be subject to a referendum, but this proposal was defeated in a 17-16 vote. The bill passed with 19 votes for and 14 against.[7] The bill now awaits formal ratification in the Danish Parliament.[8][9]

Denmark's prohibition of discrimination on the basis of sexual orientation came into force in 1987. The Faroese parliament proposed a similar bill in 1988, but the bill was rejected with only one member voting for and 17 voting against.[11] The bill was not proposed again until November 2005, when it was again rejected by a vote of 20 to 12. The members who voted against it claimed that since "homosexuality goes against the Bible," discrimination against a person on that basis should be lawful. Numerous insulting remarks were also made by Faroese MPs, including the equating of LGBT people with sinners and pedophiles.[12][13] The vote attracted the criticism of an Icelandic MP.[14]

Despite the legislative attempts, the issue did not become a source of public debate until 2006, when openly gay musician and popular radio host Rasmus Rasmussen was assaulted by five men in Tórshavn.[15][16] Rasmussen's family members then began receiving threatening phone calls. However, the police refused to handle the case because there was no Faroese law banning discrimination against sexual minorities at the time. An internet petition collected 20,000 signatures from different parts of world, which most of the signatures mainly came from Denmark, Iceland and Faroe Islands, urging the Faroese parliament to legislate against discrimination based on sexual orientation.[17] At the same time, eight women from Tórshavn also collected 2,000 signatures via e-mail through collecting signatures around Faroese shops, tourist centers and gas stations.[18]

At the time, a poll conducted by Faroese newspaper Sosialurin showed that the Faroese public was divided on the issue. [19]

On 15 December 2006, in a 17–15 vote, Faroese legislators approved the inclusion of the words "sexual orientation" in anti-discrimination law § 266B. § 266B states that "whoever publicly or with the intention of dissemination to a wider circle makes a statement or other communication by which a group of persons are threatened, insulted or degraded on account of their race, color, national or ethnic origin, religion or sexual orientation is liable to pay a fine or be imprisoned for up to two years."[20][21] When the law took effect on 1 January 2007, the Faroe Islands became the last Northern European country to ban discrimination and harassment based on sexual orientation.

Prior to 2012, LGBT rights was not a high-profile issue in the Faroe Islands.

The Faroe Islands had been viewed by neighboring countries and worldwide media as a homophobic country for a long time. Generally, this was because religious observance is stronger and more widespread in the Faroe Islands than any other Nordic country,[22] and due to the lack of gay rights, such as recognition of same-sex unions, particularly when compared with other Nordic countries. Both factors created a perception that Faroese people were intolerant of LGBT individuals. In the past, the demonization of LGBT people as "monsters" or "freaks" by Faroese churches or religious leaders was quite common,[12] and until recently there was limited knowledge or discussion of LGBT people and their rights, leading many Faroese LGBT people to remain in the closet for decades out of fear of discrimination. There were also cases of Faroese LGBT people rejected by family or friends, and of LGBT people being forced to take refuge in other Nordic countries to escape discrimination or have their rights recognized. Some living overseas even refused to return to the Faroe Islands.[13][23] On top of that, there were also a number of high-profile homophobic incidents widely reported in the Scandinavian press. 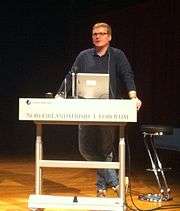 Later developments suggested that the Faroe Islands were becoming more liberal, even though the laws are still conservative compared to other Nordic countries, partly due to the outlawing of discrimination towards LGBT people, which in turn encouraged many to come out publicly and the previous negative attitudes towards LGBT individuals have been softened.[23] Various LGBT exhibitions on the islands such as "Hvat er natúrligt?"[34] and "Gay Greenland"[35] also helped increase public support for the LGBT community.

In addition, the Faroese LGBT population received support from well-known Faroese figures such as singer-songwriter Eivør Pálsdóttir, who defended gay people in an interview with Icelandic media, saying that those with narrow-minded opinions on gays and transgender people should be ignored.[36] [37]

Despite recent liberalization of attitudes towards LGBT people, limitations on their living conditions remain. Signs of a visible gay scene in the Faroe Islands are very limited. Furthermore, many members of parliament and government officials still hold homophobic attitudes or use religious reasoning to criticize LGBT people and block moves towards increased LGBT rights.[38] The country scored very low in both the ranking of 'Rainbow Map Europe 2013' and 'Rainbow Map Europe 2015'.[39][40][41]

Sonja Jógvansdóttir became the first openly gay person to be elected to the Faroese parliament after the September 2015 general election. She received 1,020 votes, making her the third-most popular Faroese politician. She was a prominent figure in the fight for legalization of same-sex marriage.[42] A law allowing same-sex marriage was proposed in 2015. A petition against this law received 1,262 signatures.[43] In April 2016, the law was passed in the Faroese parliament with 19 votes for and 14 against.[7] The bill now awaits formal ratification in the Danish Parliament.[44][45]