Culture of the Faroe Islands

Traditional Faroese houses with turf roof in Reyni, Tórshavn. Most people build larger houses now and with other types of roofs, but the turf roof is still popular in some places.

Johanna TG 326 was built in Sussex, England in 1884, but was sold to the village Vágur in the Faroe Islands in 1894, where it was a fishing vessel until around 1972. The smack was restored in the 1980s and now gives pleasure trips.[1]

The culture of the Faroe Islands has its roots in the Nordic culture. The Faroe Islands were long isolated from the main cultural phases and movements that swept across parts of Europe. This means that they have maintained a great part of their traditional culture. The language spoken is Faroese. It is one of three insular Scandinavian languages descended from the Old Norse language spoken in Scandinavia in the Viking Age, the others being Icelandic and the extinct Norn, which is thought to have been mutually intelligible with Faroese. Until the 15th century, Faroese had a similar orthography to Icelandic and Norwegian, but after the Reformation in 1538, the ruling Danes outlawed its use in schools, churches and official documents. This maintained a rich spoken tradition, but for 300 years the language was not written down. This means that all poems and stories were handed down orally. These works were split into the following divisions: sagnir (historical), ævintyr (stories) and kvæði (ballads), often set to music and the mediaeval chain dance. These were eventually written down in the 19th century mostly by Danish scholars.

Traditional Faroese music was primarily vocal, and was not accompanied by musical instruments. Only in Tórshavn instruments like fiddles were present in the older days. When trade grew in the 20th century the Faroese started to use imported musical instruments. Much of the imported music and instruments remained popular only in the capital and largest city, Tórshavn. Rural peoples remained true to traditions of the chain dance and ballads. The Faroese chain dance is a dance, which only survived in the Faroe Islands, while in other European countries it was banned by the church, due to its pagan origin. The dance is danced traditionally in a circle, but when a lot of people take part in the dance they usually let it swing around in various wobbles within the circle. There are no musical instruments used along with the dance, the dancers are singing ballads of various lengths, in either Faroese language or Danish, but usually the Danish is pronounced in a special Faroese way. One man or woman leads the song by singing the first few words and then the others follow. The leader is called "skipari" (skipper). The skipper can get help from other dancers, who can help him or her to remember the verses. A ballad can be very long with a couple of hundred verses which must be learnt by heart of the skipper.

The following description is by V. U. Hammershaimb, Færøsk Anthologi, 1891: The storyline of the ballad is attended by everybody with great interest, and if something especially pleasant or moving occurs, you can see it in the look and movement of the dancers – when the rage of the battle is described, the hands are clenched together, and when victory is in hand, they make cheering movements.

Such is the importance of the dance as a cultural element that the Faroese refer to it as Faroese dance. However, it shall be stated that the dance hasn’t the same popularity it once had. This especially applies to younger generations. 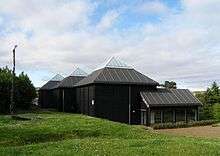 Listasavn Føroya (The National Art Museum of the Faroe Islands is in Tórshavn).

Faroese literature in the traditional sense of the word has only really developed in the past 100–200 years. This is mainly because the Faroese language was not written down in a standardised format until 1890 (in 1854 Venceslaus Ulricus Hammershaimb published a written standard for Modern Faroese that exists to this day. He produced orthography consistent with a continuous written tradition extending back to Old Norse).[2] The Danish language was also encouraged at the expense of Faroese. Nevertheless, the Faroes have produced several authors and poets. The most famous of these authors are Jørgen-Frantz Jacobsen (known for his sole novel Barbara) and William Heinesen. Both authors wrote in Danish. Other famous authors from the Faroes include Heðin Brú (The Old Man and His Sons) and Jóanes Nielsen. Poets include the brothers Janus and Hans Andreas Djurhuus, and Rói Patursson. Both Heinesen and Patursson have been awarded The Nordic Council's Literature Prize.

As with literature, painting only really took off in the 20th century in the Faroes. Famous Faroese painters include Sámuel Joensen-Mikines, Ingálvur av Reyni, Ruth Smith, Tróndur Patursson, Steffan Danielsen and Amariel Norðoy among others.[3] 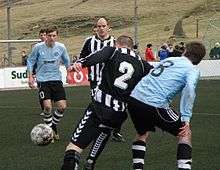 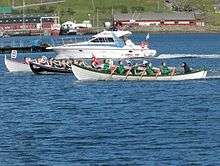 Kappróður is the Faroese word for rowing competition in wooden Faroese rowing boats. There are 7 regattas held around the islands every summer, where boats in different sizes compete. Here is the largest boat type 10-mannafør.

Lace knitting is a traditional handcraft of peoples of the Faroe Islands. The most distinguishing characteristic of Faroese lace shawls is the center back gusset shaping. Each shawl consists of two triangular side panels, a trapezoid-shaped back gusset, an edge treatment, and usually shoulder shaping. 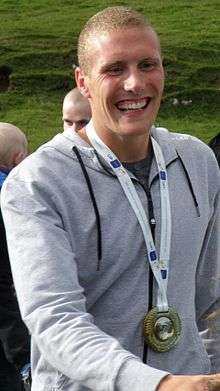 Football is the most popular sport on the Faroe Islands, closely followed by handball, volleyball, rowing and swimming.

60% of those who play sport on the islands play football. A 1-0 victory over Austria on 12 September 1990 still ranks as the greatest day in the history of football on the islands, but the national team has also recorded a number of impressive results against higher-ranked teams, primarily on home soil.

Five different institutions run football schools, attended by 1,000 children each year. Todi Jónsson is probably the most famous player from the Faroe Islands of all times. He used to play for FC Copenhagen in Denmark and was the top scorer in the 2002/2003 season.[5]

Kappróður is the national sport of the Faroe Islands. There have been rowing competitions a long time back, at least as far back as to the 1930s, and now the competitions are still in a regular routine, held in seven different places during the weekends of June and July. The races are always part of a regional festival, called a stevna, with many other activities as well. The first regatta is always held in Klaksvík on Norðoyastevna in the first Saturday of June, sometimes it can be in the last Saturday of May. The final regatta is always held in Tórshavn on the national day, or actually on the day before the national day, which is called Ólavsøka. The boat race on Ólavsøka is the only race which is not necessarily held on a Saturday, but on the 28 July, whatever the day of the week it is. The regattas in between the Norðoyastevna and Ólavsøka are held in these locations: Jóansøka is every even year held in Vágur and every odd year in Tvøroyri, both villages are in Suðuroy (South Island), and this is the only place which is not possible to drive by car from Tórshavn, people have to take the ferry Smyril to Suðuroy, which is a two-hour journey. Jóansøka is held on a Saturday around the 24 June (St. John's Wake). Eystanstevna is always held in Runavík, but the boat race is only held there every second year (even years), odd years the regatta is held in Fuglafjørður at the Varmakelda Festival (Varmakeldustevna).

Swimming is a quite popular sport in the Faroe Islands. The Faroese freestyle swimmer Pál Joensen is the sportsperson of the Faroe Islands with the best international result for the country, a bronze medal at the 2012 FINA World Swimming Championships. In July 2011 he qualified for the finals in the men's 800 meters and 1500 meters freestyle at the 2011 World Aquatics Championships in Shanghai. He placed fourth in the 1500 meter freestyle event, 0,67 second behind the bronze medalist.[6] At the same competition, he placed fifth in the men's 800 meters freestyle.[7] In 2010, Joensen won silver in the 1500 meter freestyle swimming event at the European Aquatics Championship. As of 2012, he trained in a 25 meter long pool because there was no 50 meter pool in the Faroe Islands.[8] The first 50-meter swimming pool is under construction in Pál Joensens hometown Vágur, it is expected to open in 2015. It is named after Pál Joensen: Pálshøll[9]

This article is issued from Wikipedia - version of the 11/28/2015. The text is available under the Creative Commons Attribution/Share Alike but additional terms may apply for the media files.