The tournament consists of two stages. The group stage is played from August to October, in which there are eight groups of three teams each. The eight group winners enter the knockout phase, which spans March through May. Unlike its European and South American counterparts, the winners of the CONCACAF Champions League do not automatically qualify for the following season's competition.[3]

The competition was originally known as the CONCACAF Champions' Cup when it was first organized in 1962. The title has been won by 28 different clubs, 17 of which have won the title more than once. Mexican clubs have accumulated the highest number of victories, with 31 titles in total. The second most successful league has been Costa Rica's Primera División with six titles in total. Mexican side América are the most successful club in the competition's history, having won the tournament seven times, followed by fellow Mexican-side Cruz Azul with six titles. The most successful non-Mexican club is Saprissa of Costa Rica with three titles. The only four teams to successfully defend the trophy are all Mexican: América, Cruz Azul, Pachuca, and Monterrey. The current champions of the competition are América, successfully defending the title after defeating Tigres UANL 4–1 on aggregate.

Each tournament has two parts — a group stage held from August to October, and a knockout phase held from March to May of the following year. The group stage consists of 24 teams playing in eight groups of three teams each, with each team playing the other two teams in its group twice. United States and Mexican sides cannot be drawn into the same group. The winner of each of the eight groups advances to the quarterfinals. Each phase of the knockout rounds (quarterfinals, semifinals, finals) consist of a two-leg home-and-away series with the winner determined by aggregate goal differential.[4] Seeding in the knockout phase is determined by performance during the group stage.

Prior to the 2012–13 season, the competition had involved four groups of four, with one Mexican team and one U.S. team in each group. 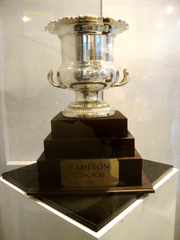 The competition was initially created as a possible measure to enter the South American Copa Libertadores, a competition organized by CONMEBOL. Prior to 2008, the tournament was officially called the "CONCACAF Champions' Cup", but was usually referred to simply as the "Champions' Cup". The competition has had several different formats over its lifetime. From 1962 until 1995, the finalists, or clubs participating in a final round, would be decided by clubs who qualify via two separate brackets: a Caribbean Island qualifier and a Northern/Central American qualification competition. Initially, only the champions of the North American leagues participated. In 1971, the runners-up of a few North American leagues began to join and the tournament began to be expanded, incorporating round-robin group phases and more teams. After the creation of the United States' Major League Soccer, the competition became a straight knockout competition from 1997 until it was revamped into the current tournament in 2008.

The competition's former format, a knockout tournament called the Champions' Cup, was played under a variety of formats. The last format, used from 2004 to 2008, had eight teams competing – four from the North American zone (two from Mexico, two from the United States), three from the Central American zone, and one from the Caribbean zone. Since 2005, the champion of the competition also gained entry into the FIFA Club World Cup, giving clubs an added incentive for a strong participation and greater interest from fans. Also, the Champions' Cup Runner-up would be one of the three CONCACAF invitees to the Copa Sudamericana. 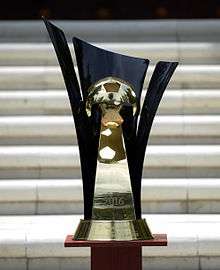 The CONCACAF Executive Committee at their 2006 November meeting decided to "act upon" a proposal—first delineated in 2003 by then Head of Special Projects Mel Brennan—at their next meeting by the CONCACAF Secretariat to develop the CONCACAF Champions’ Cup into a larger "Champions League" style event. The CONCACAF Executive Committee reported on November 14, 2007 some of the details.[5] The previous Champions' Cup format was used as planned in Spring 2008. Then, a newly expanded Champions League tournament was conducted starting in August 2008 and concluding in May 2009. The initial setup involved 24 teams and featured a Preliminary Round contested by 16 teams to reduce the field to 16 teams, which were separated into four groups of four teams.[5][6] After the Group Stage, the Championship Round are held from the Quarterfinal Round onward. Since 2012, the 24 teams have been divided into eight groups of three teams. The first placed teams qualify for the quarter finals. The quarter finals, semi finals and final are played over two legs.

Clubs may be disqualified and replaced by a club from another association if the club does not have an available stadium that meets CONCACAF regulations for safety. If a club's own stadium fails to meet the set standards then it may find a suitable replacement stadium within its own country. However, if it is still determined that the club cannot provide the adequate facilities then it runs the risk of being replaced.

Nine teams from the North American Football Union qualify to the Champions League. Mexico and the United States are each allocated four berths, the most of any of CONCACAF's member associations, while Canada is granted one berth in the tournament.

For Mexico, the winners and runners-up of the Liga MX Apertura and Clausura tournaments earn berths in Pot 3 of the tournament's group stage.

For the United States, three berths are allocated through the Major League Soccer (MLS) regular season and playoffs; the fourth berth is allocated to the winner of its domestic cup competition, the Lamar Hunt U.S. Open Cup. If U.S.-based, the MLS Cup winner, the Supporters' Shield winner, and the other regular season conference winner are placed in Pot 3 along with the U.S. Open Cup winner. If a Canada-based team occupies any MLS-allocated berth, or any U.S-based team qualifies for the Champions League by more than one method, the Champions League place is allocated to the U.S.-based team with the best MLS regular season record which has failed to otherwise qualify.

If one or more clubs is precluded, it is supplanted by a club from another Central American association. The reallocation is based on results from previous Champions League tournaments.

Three teams from the Caribbean Football Union qualify to the Champions League. The three berths, in Pot 1, are allocated to the top three finishers of the CFU Club Championship, a subcontinental tournament for clubs from associations of the Caribbean Football Union. In order for a team to qualify for the CFU Club Championship, they usually need to finish as the champion or runner-up of their respective association's league in the previous season, but professional teams may also be selected by their associations if they play in the league of another country.

If any Caribbean club is precluded, it is supplanted by the fourth-place finisher from the CFU Club Championship.

If a club fails to meet the standards for its home stadium, the club must find a suitable stadium in its own country, and if the club fails to provide the adequate facilities, it runs the risk of being replaced by another team.[9] Real Esteli of Nicaragua failed stadium requirements and was replaced by another team for the 2009–10 and 2010–11 seasons.[10] Estadio Independencia in Nicaragua has since been renovated, including upgrades to stadium lighting, and Nicaraguan teams now participate.[11] The qualifying team from Belize has failed stadium requirements and has been replaced by another team in each season from 2009–10 through 2014–15.

The CONCACAF Champions League has several corporate sponsors: Scotiabank (which has been a title sponsor of the Champions League since 2014-2015), Miller Lite, MoneyGram, Maxxis Tires, and Nike.[7][17] The sponsors' names appear on the boards around the perimeter of the field, and boards for pre-game and post-game interviews and press conferences.[7] Nike is also the official provider of game balls and referee uniforms.

1 No final match was held; the championship was decided by a final round.

2 Championship won due to withdrawal and/or disqualification of all other teams.

3 Universidad de Guadalajara, Comunicaciones and Defence Force were all declared joint winners after the 1978 final tournament was cancelled due to administrative problems and disagreements on match dates.

(When sorted by years won or lost, the table is sorted by the date of each team's first win)

Results are listed in the Wins-Losses-Draws format. Numbers in parentheses are average points (3 for a win, 1 for a draw, 0 for a loss). Results include matches from preliminary rounds, group play, and knockout play. *Penalty shoot-out considered a separate event from the match which preceded it.