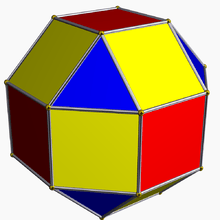 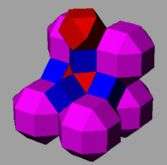 In geometry, a cantellation is an operation in any dimension that bevels a regular polytope at its edges and vertices, creating a new facet in place of each edge and vertex. The operation also applies to regular tilings and honeycombs. This is also rectifying its rectification.

This operation (for polyhedra and tilings) is also called expansion by Alicia Boole Stott, as imagined by taking the faces of the regular form moving them away from the center and filling in new faces in the gaps for each opened vertex and edge.

It is represented by an extended Schläfli symbol t0,2{p,q,...} or

For polyhedra, a cantellation operation offers a direct sequence from a regular polyhedron and its dual.

Example cantellation sequence between a cube and octahedron

For higher-dimensional polytopes, a cantellation offers a direct sequence from a regular polytope and its birectified form. A cuboctahedron would be a cantellated tetrahedron, as another example.

This article is issued from Wikipedia - version of the 3/28/2015. The text is available under the Creative Commons Attribution/Share Alike but additional terms may apply for the media files.