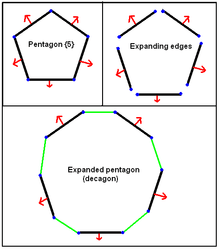 An example of expanding pentagon into a decagon by moving edges away from the center and inserting new edges in the gaps. The expansion is uniform if all the edges are the same length.

In geometry, expansion is a polytope operation where facets are separated and moved radially apart, and new facets are formed at separated elements (vertices, edges, etc.). Equivalently this operation can be imagined by keeping facets in the same position but reducing their size.

According to Coxeter, this multidimensional term was defined by Alicia Boole Stott[1] for creating new polytopes, specifically starting from regular polytopes to construct new uniform polytopes.

The expansion operation is symmetric with respect to a regular polytope and its dual. The resulting figure contains the facets of both the regular and its dual, along with various prismatic facets filling the gaps created between intermediate dimensional elements.

It has somewhat different meanings by dimension. In a Wythoff construction, an expansion is generated by reflections from the first and last mirrors. In higher dimensions, lower dimensional expansions can be written with a subscript, so e2 is the same as t0,2 in any dimension.